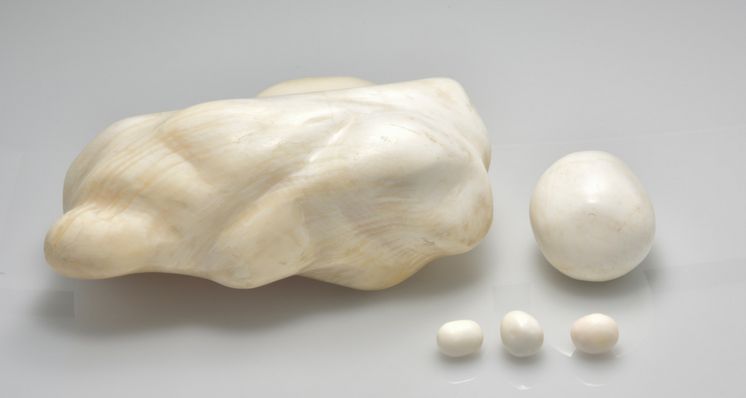 This article by Guy Lalous ACAM EG summarises a technical article from The Journal of Gemmology discussing fake pearls made from Tridacna shell.

Tridacna is a genus of large saltwater clams, marine bivalve molluscs in the subfamily Tridacninae.They inhabit shallow waters of coral reefs in warm seas of the Indo-Pacific region. All species of the Tridacnidae family are currently listed in Appendix II of the Convention on International Trade in Endangered Species of Wild Fauna and Flora (CITES, 2016), they are therefore protected.

Some species, such as Tridacna gigas are more vulnerable than others and are among the most endangered clams. They require an official permit before export. As such, trade organizations actively have banned the use of Tridacna shell beads in jewellery or as beads for pearl cultivation in recent years.

A recent example of a fake pearl that made its way into worldwide headlines via the Associated Press in August 2016 was a reported 'giant pearl' weighing 34 kg. The shape, layered structure and poor surface polish provided strong combined evidence that the object had been manufactured from Tridacna shell. This paper is about five fake pearls cut and polished from Tridacna clam shell tested at SSEF. 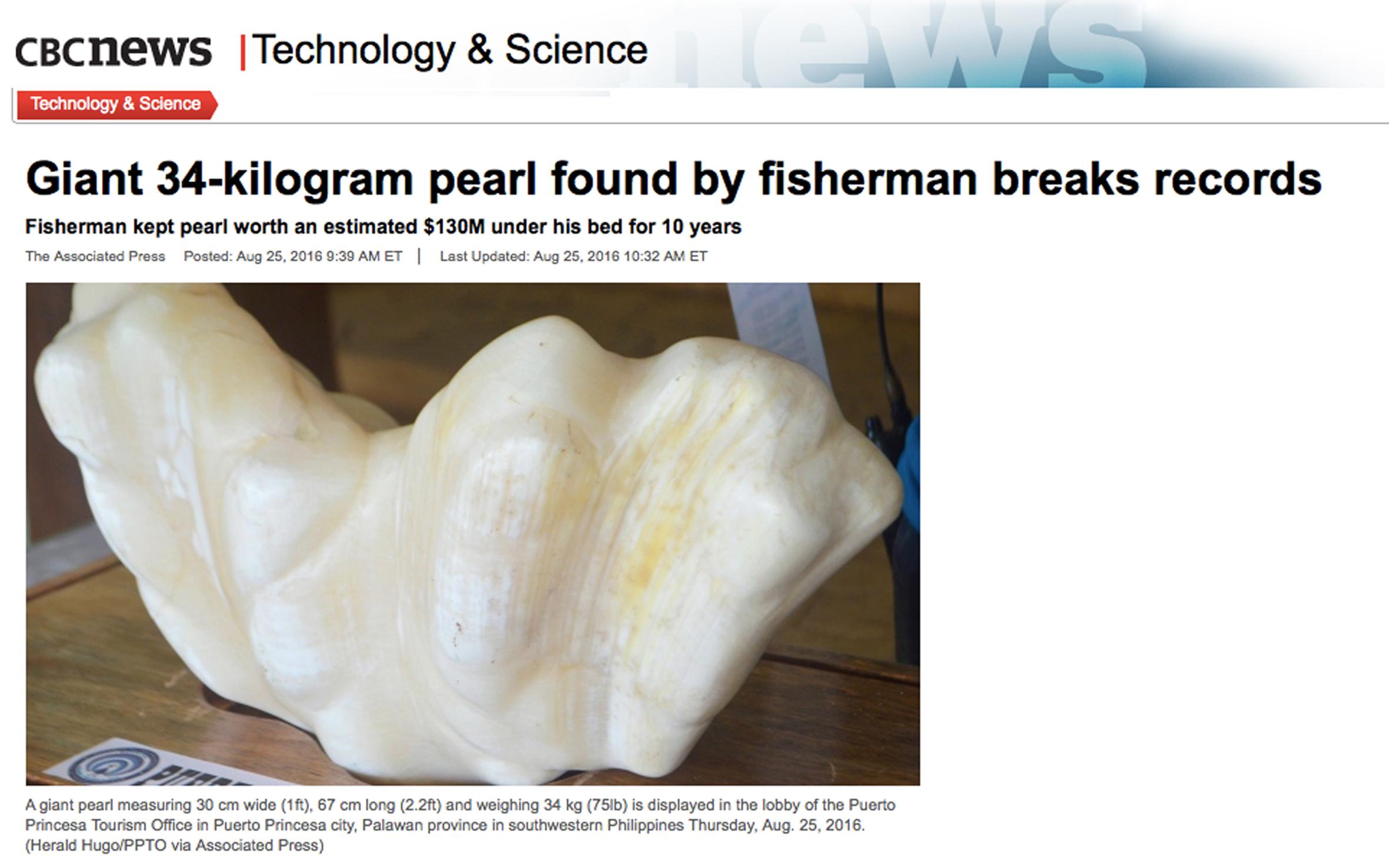 What are blister pearls and blisters?

Pearls that grow attached to the shell are often flat on one side and are called blister pearls. Blisters are internal protuberances of the shell caused by the intrusion of foreign bodies between the mantle and shell.

What is the difference between nacreous and non-nacreous pearls?

The sheen displayed on nacreous pearls is due to the structure of stacked aragonite tablets in parallel superimposition. Non-nacreous pearls often show a flame structure that is due to a crosswise array of bundles of aragonite laths or fibres. Small domains of bundles alternate with their orientation forming a criss-cross array. Light striking the side of the bundles is reflected, light falling on the profile of the bundles is absorbed. By this behaviour brighter areas alternate with darker ones, producing the flame structure (Hänni 2010).

Pearls, blister pearls and blisters from Tridacna clams are known in the trade. They are often rather dull whitish appearance and baroque shape. The surfaces typically exhibit porcelaneous appearance with fine flame-like structure.

The shell material of Tridacna clams consists of regularly and densely interwoven aragonite fibres. This partially results in fine 'flame structures' when viewed in reflected light.  As a consequence, both natural pearls and polished shell pieces from Tridacna clams often show such flame structures on their surface.

They may also be the beautiful products of other mollusc species— misnamed as Tridacna clam pearls, since there is currently no method for the species identification of such non-nacreous white pearls. This is very much in contrast to nacreous pearls which currently can be separated genetically, and also in some cases by UV-Vis-NIR reflectance and Raman spectroscopy.

Viewed with reflected light, all five specimens showed distinct curved, layered structures across their entire surfaces. These structures were consistent with the undulating layered structures of Tridacna clam shell. Close examination of all the samples further revealed distinct polish marks in random orientations.  The low-quality polish, suggesting a rushed 'production'. 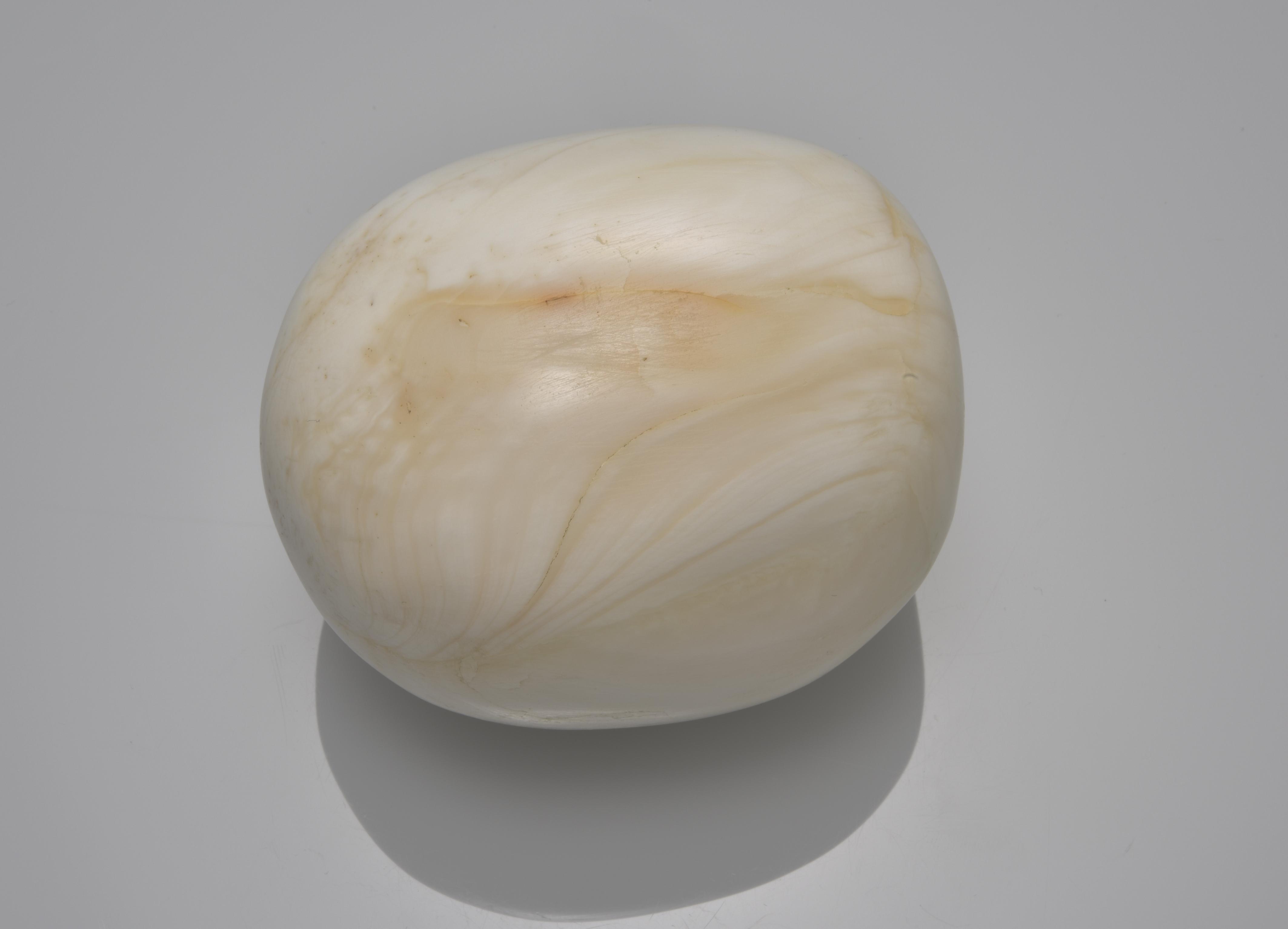 Using a strong transmitted fibre-optic light source, it was possible to investigate the internal structure of the five study samples. All showed distinct and sharply defined internal layering, representing the seasonal calcium carbonate precipitation layers of the shell. Such features are not commonly observed in pearls, which form by precipitation of concentric spherical layers within the pearl sac of a mollusc. 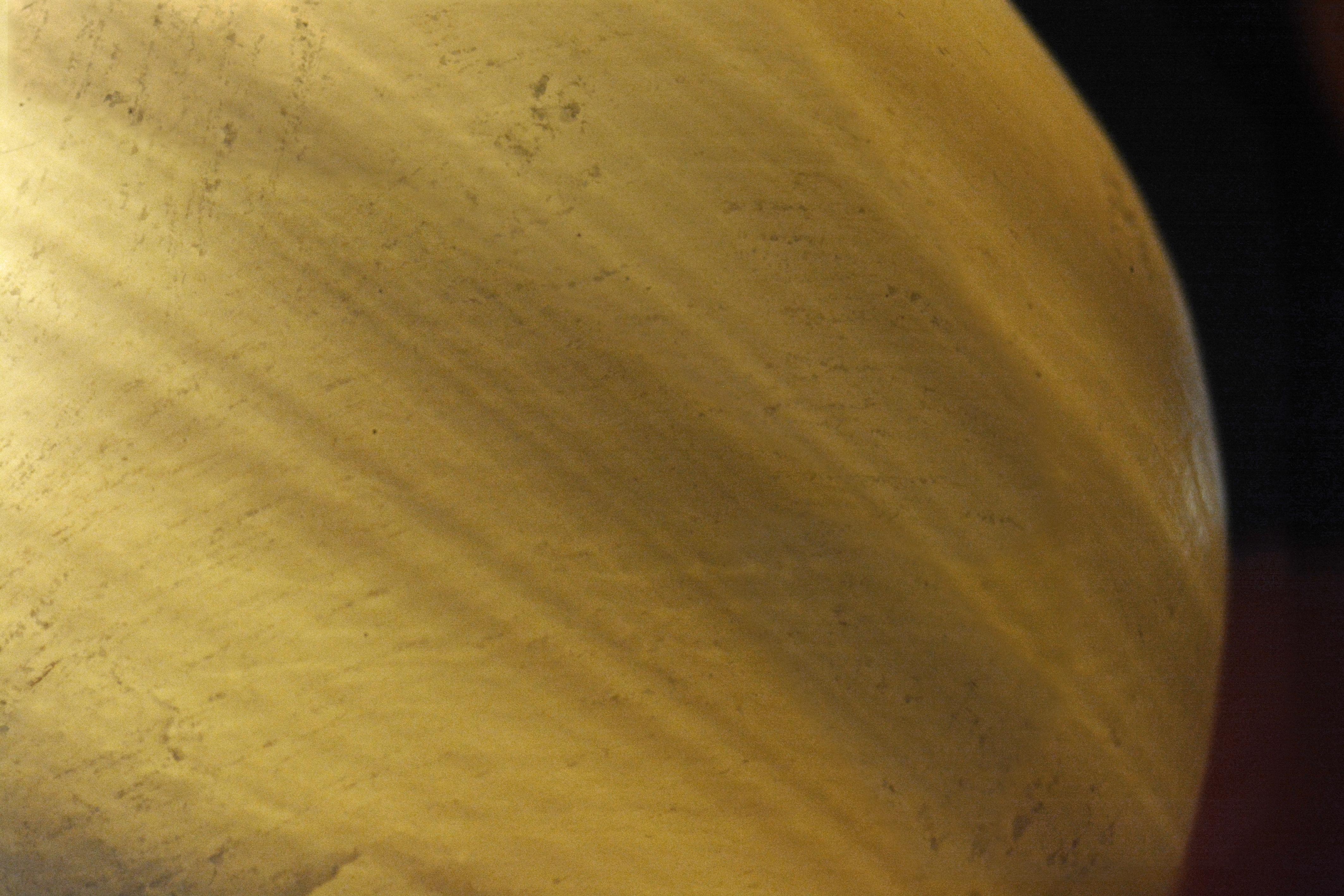 Viewed with transmitted fibre-optic illumination, this close-up of specimen D (22.5 g) reveals the layered structure of the Tridacna shell from which it was cut. Photo by M. S. Krzemnicki, © SSEF; image width 11 mm.

Raman spectroscopy of one sample revealed that it consisted of aragonite, as expected for Tridacna clams. EDXRF analysis of this sample showed the expected major amounts of Ca along with traces of Sr (0.25 wt.% SrCO3), but with Mn below the detection limit, clearly supporting a formation of the biogenic calcium carbonate in marine waters. X-radiography of 3 samples revealed no discernible internal structures such as layers or internal cavities in any of these specimens.

This result is very common for non-nacreous pearls or shells (or beads made from such shells) that consist completely of densely interwoven aragonite fibres.

What are melo pearls?

Melo pearls are beautiful non-nacreous pearls produced by a mysterious sea snail living in the hot waters of South East Asia. They occur in a range of colours; the most prized being the intense orange hue. These pearls exhibit a silky flame-like structure and a porcellaneous lustre that make them very attractive. They are rare and a collector’s item.

Occasionally encountered in the laboratory are smaller fake pearls that most probably have been cut and polished from Tridacna clams. They are polished with great care to display their fine flame structure and perfectly shaped to fit into jewellery. As such, they have been mistakenly bought as non-nacreous natural pearls. These manufactured ‘pearls’ may be dyed orange to imitate Melo pearls.

Raman spectroscopy of one such Melo imitation showed no peaks at 1134 and 1527 cm−1 characteristic of the natural-colour pigment in Melo (and conch) pearls, but did reveal three broad features at 1519, 1499 and 1363 cm−1 that closely matched the broad Raman peaks of organic dye. 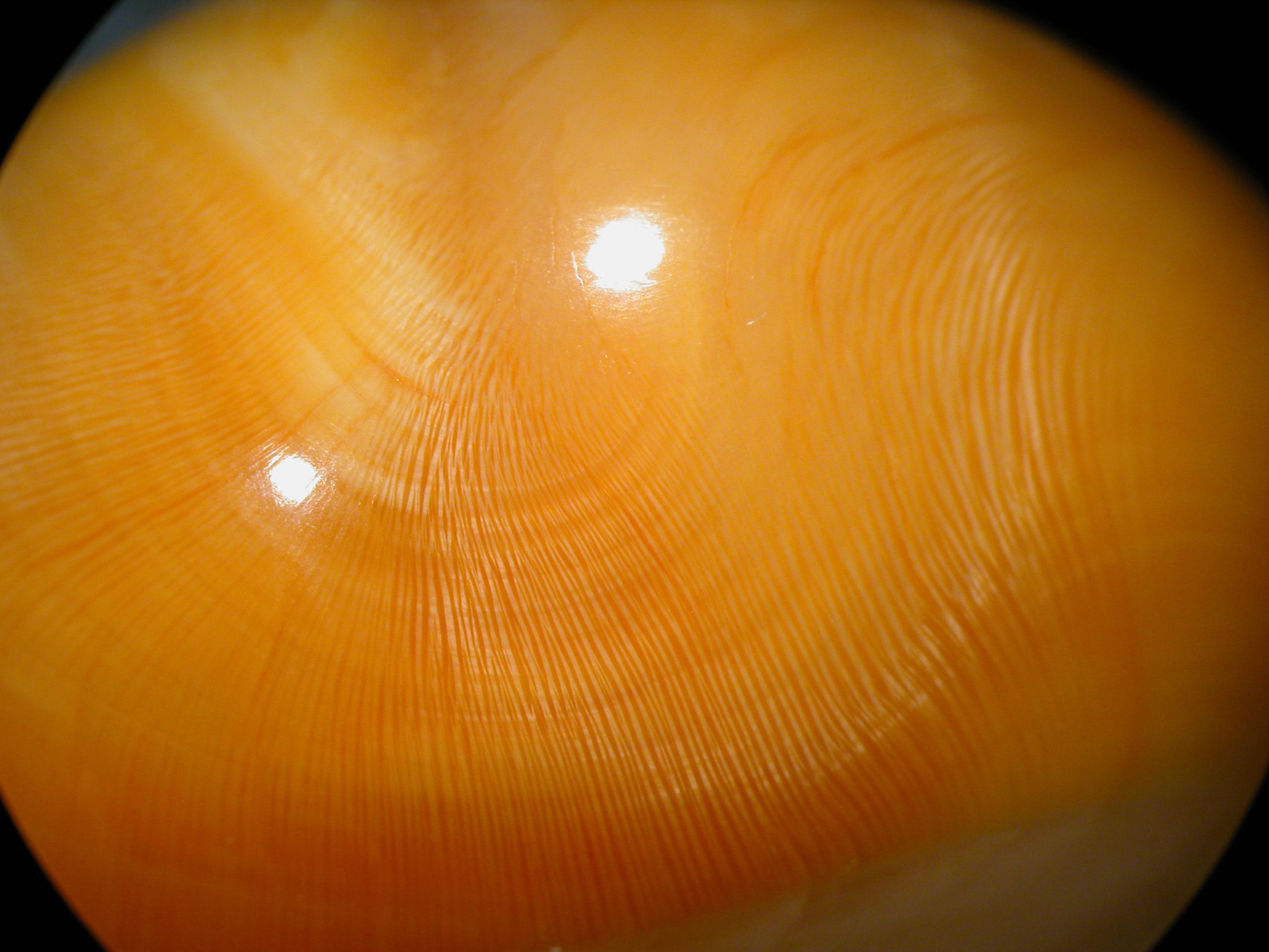 This polished Tridacna shell bead (~23 × 16 mm or 63 ct) was dyed to imitate a Melo pearl. Note the well-developed flame structure, as would be expected for a genuine Melo pearl. Photo by M. S. Krzemnicki, © SSEF.

The identification of fake pearls made from Tridacna gigas Shells is in most cases straightforward, and is mainly based on their characteristic layered structure observed in reflected light and with transmitted fibre-optic illumination.

This is a summary of an article that originally appeared in The Journal of Gemmology entitled 'Fake Pearls Made from Tridacna gigas Shells' by  Michael S. Krzemnicki and Laurent E. Cartier 2017/Volume 35/ No. 5 pp. 430-435

Cover image: Five fake pearls, all cut from the shell of giant clams, were studied for this report. The largest item is 27 cm in diameter and weighs 6.8 kg. Photo by V. Lanzafame, © SSEF.

More in this category: « Synthetic Emeralds Grown by W. Zerfass: Historical Account, Growth Technology and Properties Identifying Reconstructed Amber versus Natural Amber »
Tweet
Become a Gem-A Member
Apply to become a Gem-A Member
Subscribe to our Newsletter
Keep updated with Gem-A
Sign Up
Get in Touch
Can't find what you're looking for?
Contact Us