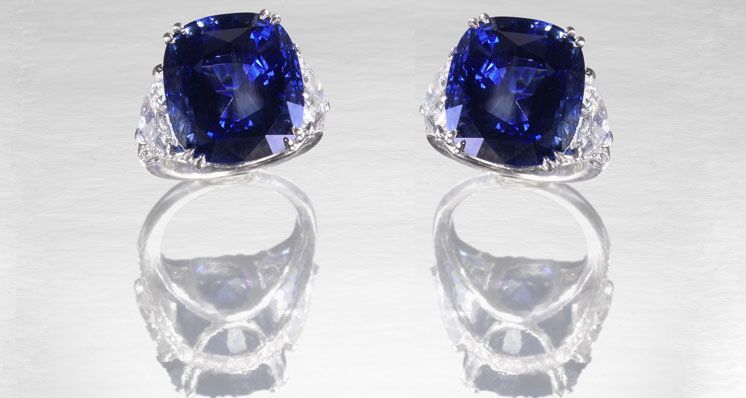 This article by Guy Lalous ACAM EG summarises the nature of opinions on geographical origin reports from The Journal of Gemmology discussing ways to improve the helpfulness and transparency of gemmological testing and grading reports.

The origin of gemstones can be understood in terms of geological setting, in a geographical location. An origin written on a gemstone report is often an opinion, based on the present knowledge of the gemmologist in a laboratory. Origin however affects the value of gems of equivalent beauty and quality. The more knowledge we gain, the more complex the problem of geographical origin determination of gemstones becomes.

Recently sapphires from Ambatondrazaka, Madagascar entered the market. The visual appearances of some of these sapphires resemble those from Kashmir. The samples studied by SSEF did not contain any of the highly characteristic inclusions of Kashmir sapphires, such as pargasite needles, short-prismatic tourmaline and corroded long-prismatic zircon. The material produced from Ambatondrazaka covers a range of stones with low iron content and milky aspect similar to stones from Ilakaka and Sri Lanka as well as stones with higher iron content with a silky aspect reminding blue sapphires from Mogok.

A parcel of rough corundum from Badakhshan was recently examined by GIA in Bangkok. The samples displayed ladder- or dust-like inclusions similar to those seen in sapphires from Kashmir. Tourmaline was one of the inclusions identified using Raman spectroscopy. An experienced gemmologist can identify the country of origin of many stones, but in some cases, it is impossible.

This article discusses the nature of opinions on geographical origin reports, the objective and subjective factors leading to an expression of opinion of origin—and the levels of confidence in that opinion—and then considers extended liability and trade expectations before giving recommendations for initial steps toward improving the transparency and usefulness of such reports by proposing changes in their wording and content. The paper is based on the author’s recent broader study of the legal aspects of the opinions provided by experts in the field of art and antiques. 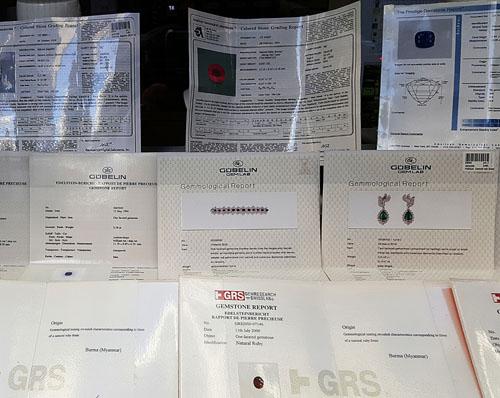 What about International Standard ISO/IEC 17025

ISO 17025 is applicable for all laboratories performing calibrations and/or tests. It contains all the requirements that these laboratories should meet in order to demonstrate that they operate a quality system; they are technically competent and are able to generate technically valid results. A laboratory that establishes a laboratory management system compliant with ISO/IEC 17025 can obtain an accreditation certificate from an accreditation body. The accreditation body is responsible for assessing the quality system and technical aspects.

Some laboratories are scrupulously cautious with their wording. They are usually careful to state that their reports present opinions. There has been some education of laboratory users about the way in which labs reach their conclusions, such as SSEF’s Standards & Applications for Diamond Report/Gemstone Report/Test report (1998), but little to help the user gauge how much confidence the laboratory might have in its report.

A consensus approach to come to a conclusion is not unusual. If two employees in a lab have slightly different views, they will typically ask a third for their opinion and go with the majority. This is nothing more than educated guesses or a consensus of educated guesses. The results of a specific stone based on opinions may vary to a certain degree from laboratory to laboratory.

Objective facts can be checked and replicated by another laboratory. Objective facts and subjective interpretations derived from them should be distinguished in gemstone reports. This suggestion of a distinction between the objective and subjective is not a novel proposal; it is already laid down for the handful of gemmological laboratories that are accredited under International Standard ISO/IEC 17025 (2005). This standard states in section 5.10.5 that “Opinions and interpretations shall be clearly marked as such in a test report”.

It would make things clearer if all gem labs would clearly state that opinions are simply opinions when they are presented in a report. But, the word opinion is fuzzy and the user of a report should have an indication of the confidence the laboratory has in its opinion. Multivariate statistics can generate probabilities expressed in percentages with definable margins of error.

If the trace-element ratios indicate an 85% chance that a sapphire is from Kashmir, it seems fair—and certainly in the spirit of International Standard 17025—for the end-user to be told. Of course, there is a further layer here: the confidence a laboratory has in the database or reference collection upon which it relies. Only a few laboratories have the resources to build rigorous sample databases. ‘Objective’ statistics based on factors such as trace-element ratios are only as reliable as the comparative data to which the lab has access.

Labs are potentially liable to third parties or classes of third party that they know, or should reasonably expect, are likely to rely on their report. What about contrary evidence? There is a legal support, in the UK anyway, to the view that if the seller is aware of any significant negative opinions about a gem, the buyer should be advised of this.

On this basis, the user of the report has the right to know if the data or observations leading to a ‘Burma’ origin for a sapphire left room for significant doubt, or if two of the gemmologists in the lab thought it was from Myanmar but another indicated Sri Lanka. The not-uncommon practice for a dealer to get more than one lab report for the origin of a sapphire and retain any that say Kashmir and dispose of the rest, is likely to be illegal rather than just unethical.

This selective presentation of lab reports in the trade has been countered by the growing practice for major auction houses to list the findings of different gem labs in their catalogues, even if they disagree. 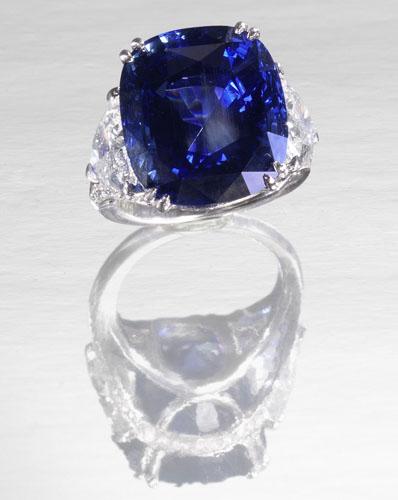 The trade expects reports to come in with black-and-white answers, with the origin of the gem stated as unequivocally as possible. If gem laboratories are too cautious in their reports, they lose customers; if they are overconfident, they lose credibility. Labs are businesses and costly to run, so there must be a balance.

Labs should provide an overview of the range of observations or tests that were significant in reaching the conclusions presented and it should be worded in a way to indicate broadly how confident the lab is in its opinion.

• When conclusions presented in a lab report are opinions, not facts, they should be clearly expressed as such at the point where they are presented. Reports should briefly explain the nature of the observations and analyses on which their conclusions are based, where possible including relevant photomicrographs, analyses or statistical information.

• Another step would be to realize that use of the word ‘probably’ in a report can be a sign of wisdom rather than weakness.

The technology to identify a gemstone’s geologic and geographic origin has improved in the last decades. Some gems seem to be sold as much on the basis of their accompanying paperwork as on their appearance. Origin reports support price premiums for selected coloured stones but geography is not a quality factor and has little proven influence over the appearance of a coloured stone.

This is a summary of an article that originally appeared in The Journal of Gemmology entitled 'Rethinking Laboratory Reports for the Geological Origin of Gems' by Jack M. Ogden 2017/Volume 35/ No. 5 pp. 416-423

More in this category: « How to Separate Natural from Synthetic Ametrine using Conventional Equipment Synthetic Emeralds Grown by W. Zerfass: Historical Account, Growth Technology and Properties »
Tweet
Become a Gem-A Member
Apply to become a Gem-A Member
Subscribe to our Newsletter
Keep updated with Gem-A
Sign Up
Get in Touch
Can't find what you're looking for?
Contact Us