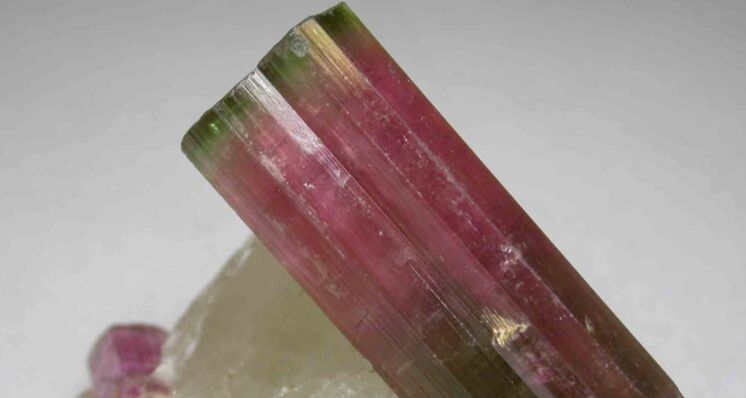 Multi-coloured gemstones are a fantastically colourful type of gem that display two or more colours when they are in rough crystal form or fashioned for a piece of jewellery. Certain varieties of multi-coloured gemstones are very popular in the market as they can make vibrant and dazzling jewels. Some particularly desirable gems that fall into this category include watermelon tourmaline, bi-colour sapphire and ametrine.

Watermelon tourmaline is named as such because of its distinctive colouration, which displays green, pink and colourless zones in two different patterns depending on the way a crystal grows and is subsequently fashioned.

The colour zones can form in concentric rings from the centre of the stone outward with a pink core and outer green band. This pattern looks surprisingly similar to a watermelon, hence the name, and is best displayed when the crystal is cut in cross-section slices. Watermelon tourmaline can also sometimes be seen cut in the shapes of butterfly wings or leaves. 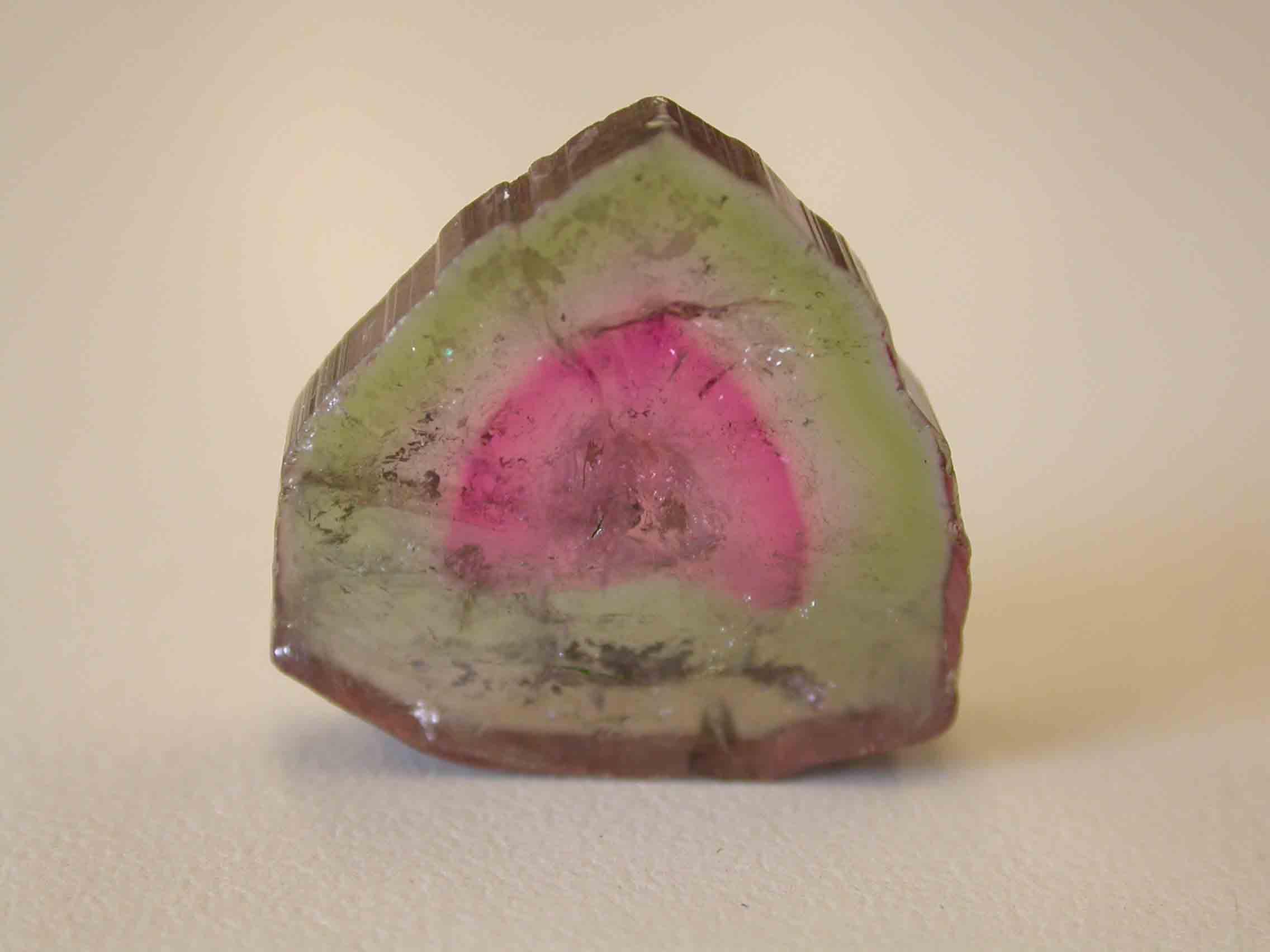 Bi-colour or parti-colour sapphires will show two to three colours including, but not limited to, blue, yellow and green. These stones will be cut in such a way to show off the zones of colour that can look like ethereal patches or sit in distinct zones that are angular (sometimes hexagonal), straight or stripy.

Ametrine is a variety of quartz that is a combination of two colours: the purple of amethyst and the yellowish-orange of citrine. The colour zones occur in straight or geometric zones that can either form in up to six triangular sections that emanate from a central point, or simply divide the stone into two or more zones of colour. The areas of colour can be crisply or softly defined. 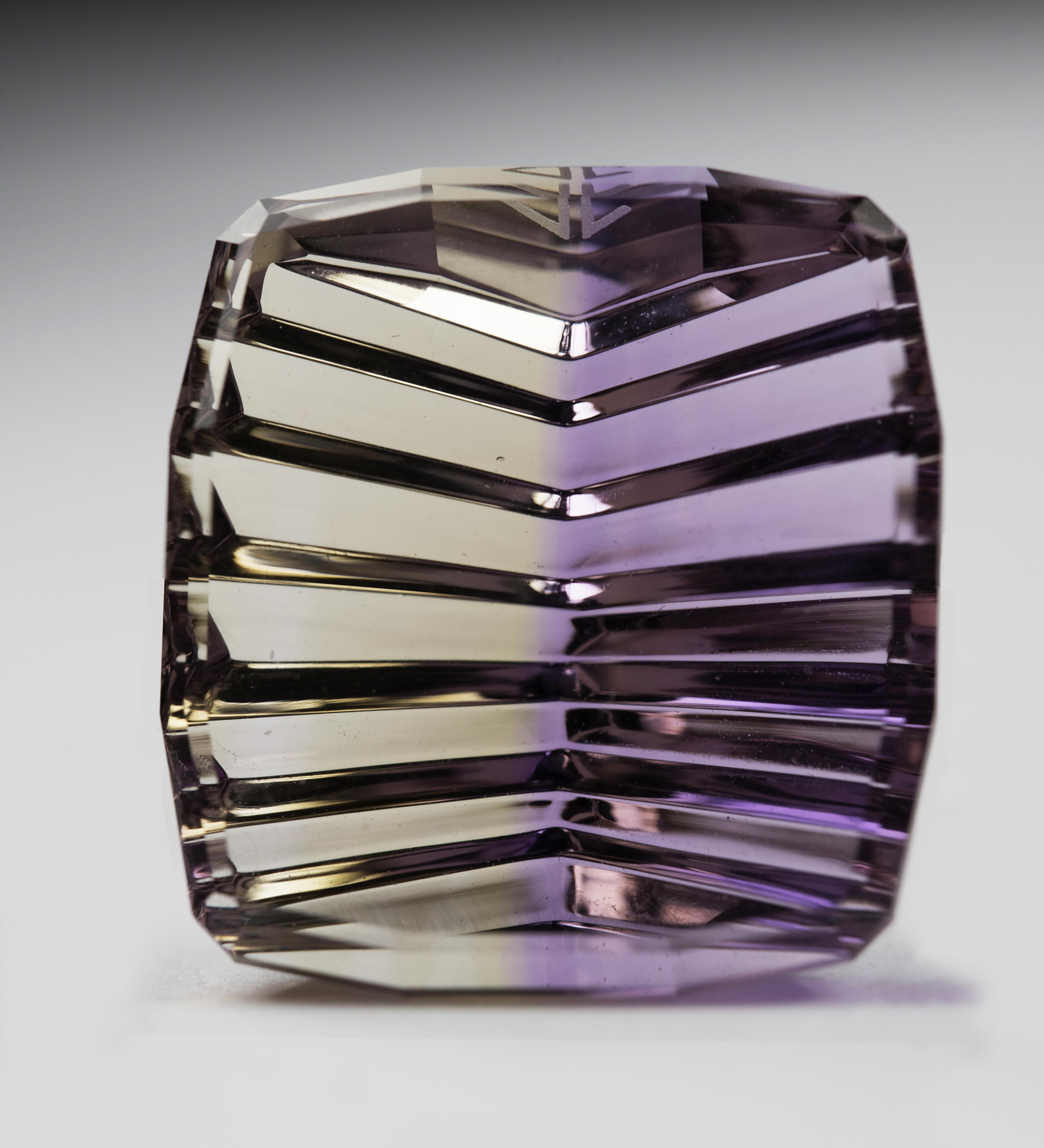 Ametrine occurs naturally and the pattern develops during growth. Ametrine-like colour zoning can also be induced in lab-grown amethyst by heating part of the stone to induce a yellow colour. In such cases, the border between the purple and yellow zones is often sharp. The main commercial source of natural material is Bolivia.

A prime example of a colour-change gemstone is alexandrite, a variety of chrysoberyl. It looks green in daylight and red in incandescent light, giving it the old adage, 'emerald by day, ruby by night' - the colour changes drastically before your very eyes with the flick of a light switch! Multi-coloured gems may show colour-change but this is not a distinguishing feature of these gemstones.

Read more: What Makes the Alexandrite Colour-Change Effect so Special?

Multi-coloured gemstones are one of the great marvels of gemmology and are loved the world over for their unique and eye-catching appearance. While some varieties of multi-tonal gemstones can command a premium, like watermelon tourmaline, others such as ametrine tend to be relatively affordable and, although rare, appear quite often in jewellery.

Are you passionate about coloured gemstones and want to expand your knowledge? Have a look at our Gemmology Foundation and Gemmology Diploma courses.

Interested in learning the basics of gemmology? Why not try one of our introduction Workshops or Short Courses.

Tagged under
More in this category: « Understanding Red Beryl Exploring the Varieties of Quartz »
Tweet
Become a Gem-A Member
Apply to become a Gem-A Member
Subscribe to our Newsletter
Keep updated with Gem-A
Sign Up
Get in Touch
Can't find what you're looking for?
Contact Us