Senior Gemmology Tutor Pat Daly FGA DGA explores the phenomenon of opalisation, how it occurs and where you can expect to find opalised specimens.

Most gem quality opal forms in sedimentary rocks, as it does in Australia, for example. Many of these were marine or lake sediments within which shells, bones and wood were sometimes buried and preserved. Most commonly, opal has filled the spaces that remained after these fossils were dissolved; the opal acquired its shape simply because it filled the spaces created by shells or other organic remains.

Learn more: What are the Different Types of Opal?

More rarely, organic structures can be well preserved. For example, buried wood may be preserved if it becomes waterlogged in seas or lakes. Water may deposit minerals in the wood, and they can replace organic structures in remarkable detail if the process is slow and gradual. In these fossils, the appearance of bark and growth rings and even the cell structure of the original wood might be seen.

Various minerals are involved in these processes, including opal which, in favourable circumstances, can be pleasingly coloured or iridescent.

Opal fossils have formed in various localities. Fossilized wood, for example, has been recorded from Nevada, USA, and Hungary, where a mammal bone was also found. A fossil wood preserved in blue, non-iridescent opal from Indonesia has been marketed recently.

It is in Australia where the most beautiful and dramatic opal pseudomorphs are found. A pseudomorph is an object that has been replaced by a mineral, of which it was not originally composed, without changing its shape.

A rare type of precious opal pseudomorph is sometimes called an ‘opal pineapple’ because of its spiky crystal clusters that resemble the green tops of pineapples. These specimens are found in the White Cliffs in New South Wales, Australia.

It is estimated that less than 500 or so of these ‘opal pineapples’ have ever been found and many have been cut and polished for the jewellery trade. Some survive, however, and are preserved in museums around the world.

A wide range of marine bivalves (clams), snails and other invertebrates offer visually appealing and fascinating insights into ancient inland seas. They formed during the Cretaceous geological period, around one hundred million years ago. 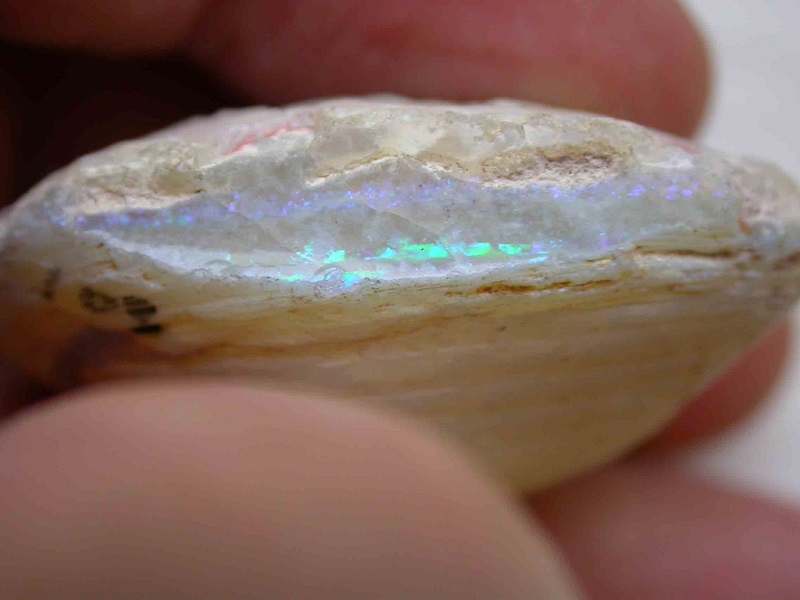 The fossils of land animals, some of precious opal, occur at Lightning Ridge in New South Wales, Australia. These include dinosaur remains and exceptionally rare fragments of birds and mammals. These may be rivalled by a (so far unconfirmed) insect preserved in precious opal from Indonesia.

The most breath-taking opalised fossils are the almost complete skeletons of marine reptiles. Two of these are displayed in museums. One, a 6.5 metre-long plesiosaur composed of common opal, is in the South Australian Museum.

The other, which has been given the name Eric, is a 2.5 metre-long pliosaur whose bones are, at least in part, composed of precious opal. It can be seen in the Australian Museum in Sydney.

Spectacular fossils such as these belong in museums where they can be displayed for the benefit of visitors. More modest but nonetheless desirable, and sometimes affordable, examples appear in the gemstone and fossil markets from time to time.

Enhance your understanding with our beginner’s guides in Gem Knowledge, part of the Gem-A Gem Hub.

Are you ready to start learning the Gem-A Gemmology Foundation via Online Distance Learning? Find out more here.

Main image: A fossilised ammonite shell with ammolite, an opal-like organic gemstone, across its surface.

More in this category: « Gem Careers: A Lifetime of Expertise Understanding Play of Colour and Patterns in Opal Gemstones »
Tweet
Become a Gem-A Member
Apply to become a Gem-A Member
Subscribe to our Newsletter
Keep updated with Gem-A
Sign Up
Get in Touch
Can't find what you're looking for?
Contact Us