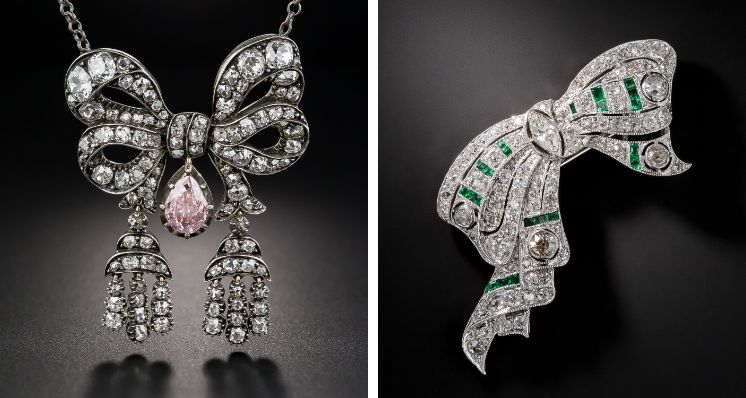 As a gemstone and jewellery grading and identification expert at Lang Antiques in San Francisco, Starla Turner FGA GG has seen her fair share of exceptional pieces, both historic and contemporary. Here, she delves into the history of platinum and explores how it has influenced jewellers since the 1700s.

Early Uses of Platinum in Jewellery

A curious metal, the small particles were rollable and forgeable (shaped by compressive blows) into solid wearable jewellery, but not meltable. To join the tiny pieces, early metalsmiths coated and fused them with melted gold. Platinum was inconsistent; it was workable but often cracked. Why? A natural piece of platinum is often an aggregate of the six platinum group metals.

Three are used for constructing jewellery: platinum, iridium, and palladium, and three mainly used for industry: ruthenium, osmium, and rhodium (plating that resists scratching and tarnishing). They are ‘noble’ metals: nonferrous, highly stable chemically, and resistant to oxidation and corrosion from acids.

Each metal has a different hardness, density, ease of bending and shaping (malleability), ease of drawing into wire (ductility), and resistance to breaking under tension (tensile strength). They are a ‘dead’ metal with little spring back memory. When forged or rolled as a unit, the mosaic of metals resulted in an inconsistent, patchwork solid, hence the cracking.

Scientific communities of the 1800s identified and separated out each metal using various acid solutions and temperatures. Immersing the platinum aggregate in hot aqua regia – a combination of nitric and hydrochloric acids – actually dissolved the platinum component.

Once precipitated out of this solution and dried into a ‘sponge’ the pure platinum was ground into powder, cold compressed, high-temperature heated (sintered) and forged into a workable solid bar.

An Edwardian black bow brooch crafted in platinum over gold.

During this sintering process, each overlapping atom develops ragged edges that mingle to form a physical bond and create a solid that can be forged and rolled into objects.

This ‘powder metallurgy’ took decades to evolve into an efficient process. Still, pure platinum was soft and considered easily ‘scratched’. Typically, a platinum scratch is usually a compaction dent with little or no metal lost. A gold and platinum alloyjoined pieces as no efficient platinum melting method was known.

In the 1850s, George Matthey and Wilhelm Hereaus’s oxy-hydrogen blowpipe techniques finally melted larger quantities of platinum at approximately 1,768 degrees Celsius and the 1901 invention of the super hot oxy-acetylene torch did it even faster. These tools and fuels created a safe, economical, direct, hot flame.

For the all-white look, metalsmiths needed platinum-to-platinum joins. Brazing, often called soldering, used a low melting point, unifying filler (solder) of gold, silver, and platinum that diffuses into the platinum along the grain boundaries, without melting the pieces being soldered together.

Platinum, not a strong thermal conductor, stays cool except at the torched area, but a methodical assembly process of pre-polished parts is necessary to retain the pieces’ integrity and clean finished look.

Typically the ‘solder’ differs in colour, hardness, and strength relative to platinum and care is needed to prevent over polishing the softer solder seams leaving ridges. The join is visible, often greyish from oxidation or yellowish from the gold (1). Either sawing out a single solid piece to minimized the colour seam differences or creating the smallest, strongest joins were critical to beauty.

Finally everything was in place to make all-platinum jewellery: One problem… no demand! 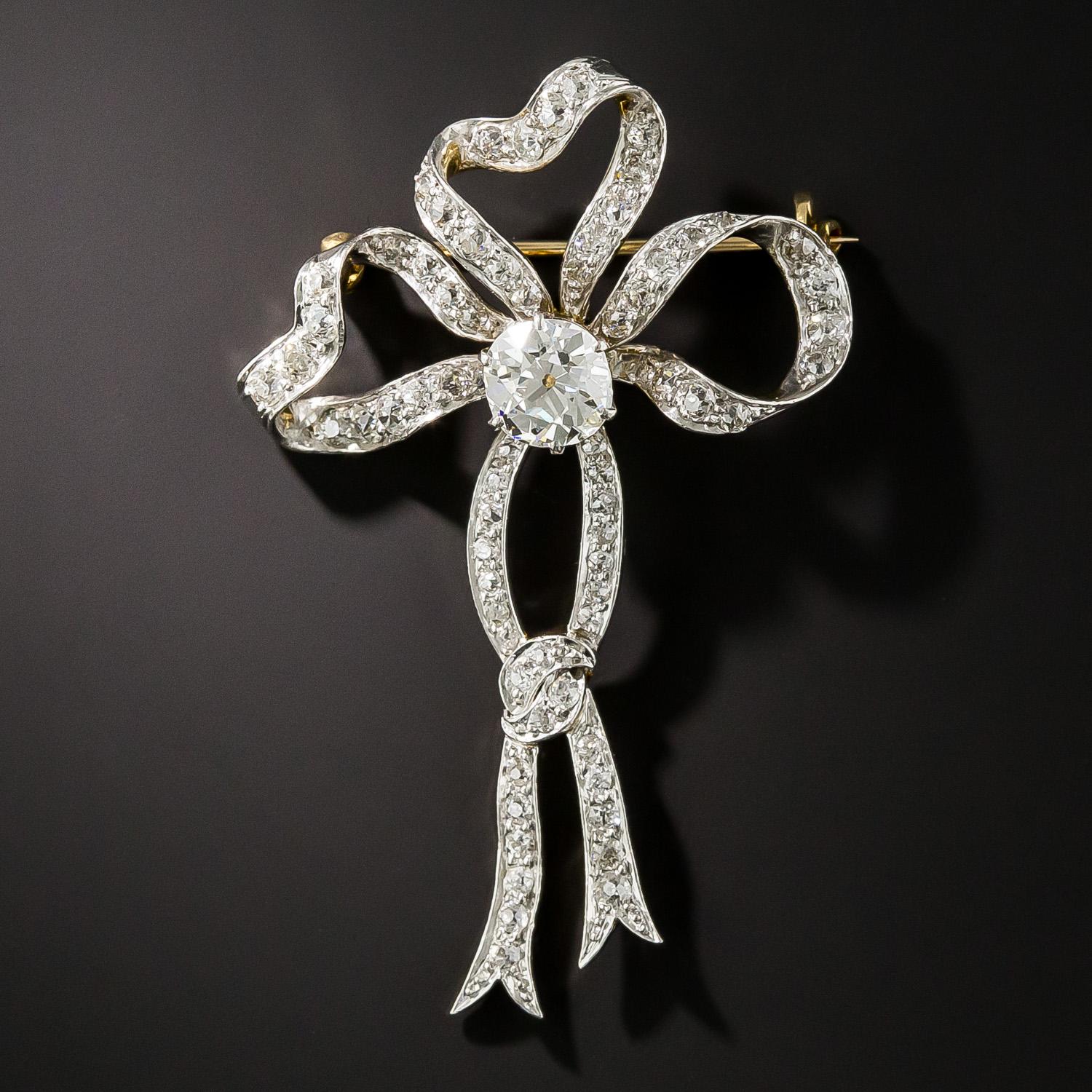 A three loop Edwardian bow brooch in platinum over gold.

In the 1880s, the reigning white jewellery metal was silver. The advantages of the white colour, low melting point, abundant supply, and workability outweighed silver’s tendency to tarnish and the need for expensive gold backings for strength. Gold and silver easily dissolved into each other creating a strong bond and secure setting for the abundant, newly-showcased South African diamonds. It wasn’t ideal.

On the cutting edge, in 1890, Cartier introduced all platinum, luxury jewellery in its iconic garland style. Cartier’s secret platinum alloy revealed a white shimmering surface. According to Cartier, Jewellers Extraordinary by Hans Nadelhoffer (1984), this was achieved through “millegraining ‘demetalized’ platinum, dotting edges into glistening reflections of light that encircled diamonds”.

Finer work, with thinner shanks, and stones set closer together with smaller almost invisibly set prongs, kept the pieces strong yet light in look and lighter in weight, perfect for highlighting diamonds. Platinum’s deadness made setting diamonds easier and faster. The stronger prongs, pushed down once, stayed securely in place — a bonus for those new to working with platinum.

The tenuous bond between gold and platinum, due to different expansion and concentration temperatures, created stress, brittleness and gaps wherever the two diffused and interfaced. Nonetheless, platinum over gold, garland style and foliate patterned jewellery prevailed with technology and tradesmen’s capabilities seguing to all-platinum jewellery by early 1900. 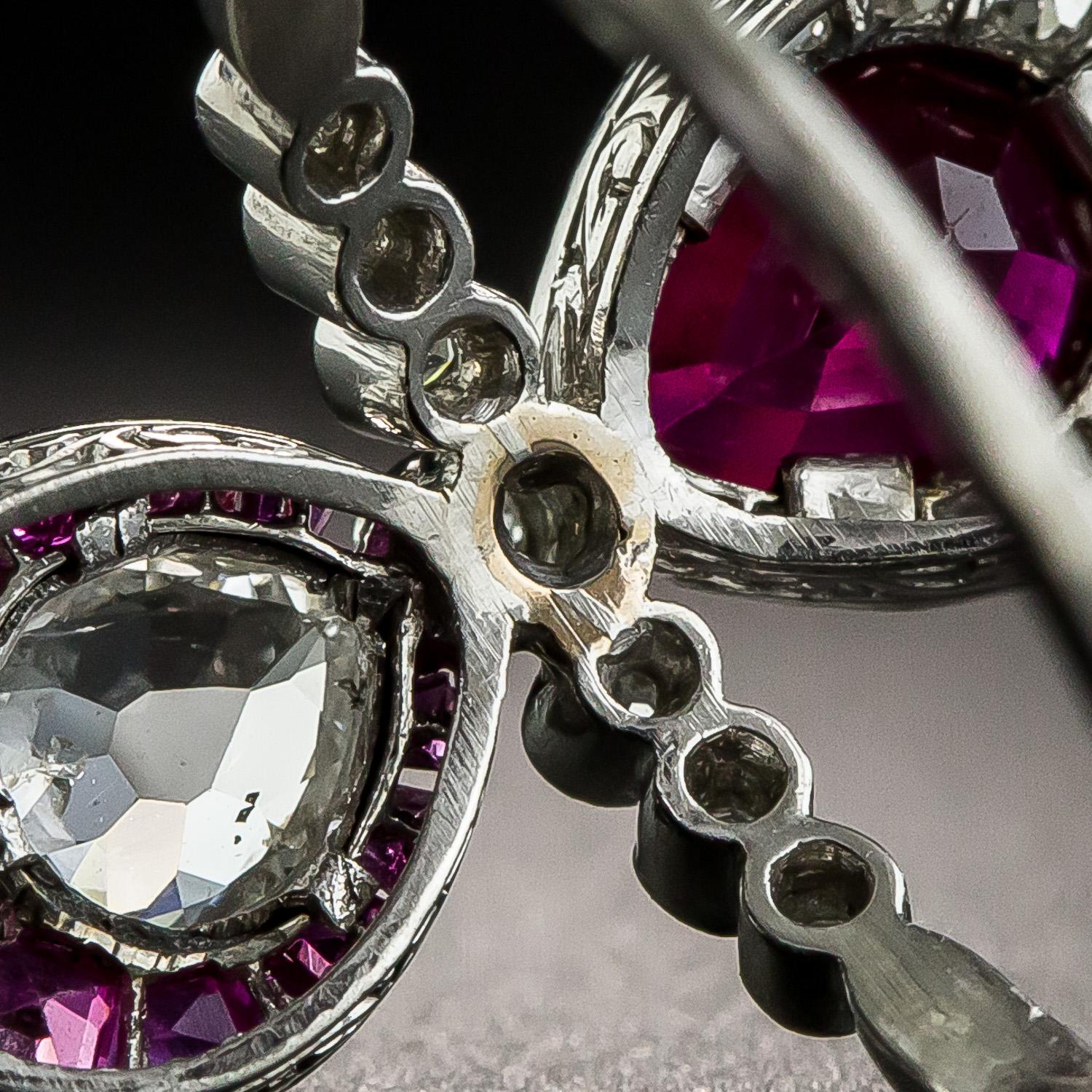 Examples of seams and visible joins on die-struck platinum jewellery.

The 33% increased density of platinum die-struck pieces, relative to gold, produced an attractive higher lustre as well as increased strength and durability. Platinum’s higher cost (from being 60% heavier than gold) was offset by thinner, finer jewellery. Though platinum could be melted and cast, hand-fabrication for fine jewellery and die striking for mass production were the prevalent techniques. Platinum ruled!

In North America, during World War I and II, platinum was deemed a strategic metal used for rifle and engine parts, explosives and the making of armaments. It was forbidden in jewellery. Alternatives were needed. The war hardships distracted most from the overlooked and underused 1915 patent for white gold (gold, palladium and zinc).

In 1920, Belais Company patented, trademarked, branded and heavily advertised a popular 18K white gold. Well-received, lightweight, filigree, die-struck pieces were rapidly produced and at a lower cost than platinum. Until the onset of World War II, platinum dominated the higher-end worldwide jewellery market with white gold popular for coloured stone and smaller diamond pieces in the USA, and yellow gold popular in the UK.

In 1942, during WWII, palladium became a stand-in for platinum. While lighter, harder and white, its demand fizzled post war. By the 1950s all-platinum jewellery roared back.

The century old heirlooms we see today are a testament to the enduring properties of platinum. Platinum metals were created during the supernova explosions, formed by nuclear fusion, and dispersed into clouds that our earth formed in. Look down, a material that was created by the Big Bang now resides on your finger.

Acknowledgement: Precious metals management company, Johnson Matthey, has written and compiled the most comprehensive modern and historical articles on platinum, often based on its founders’ experiments and experiences, and graciously and freely shares the knowledge on the web and in books. I am forever grateful. A complete list of sources is available upon request. All images courtesy of the author and Lang Antiques.

Main Image: A silver over gold necklace set with a pink diamond from the mid-1800s (left) and an all-platinum emerald and diamond brooch.

More in this category: « Focus on Gemstone Fluorescence: Looking for the Light Fake News? Discovering 'Alternative Facts' in Gemmology »
Tweet
Become a Gem-A Member
Apply to become a Gem-A Member
Subscribe to our Newsletter
Keep updated with Gem-A
Sign Up
Get in Touch
Can't find what you're looking for?
Contact Us