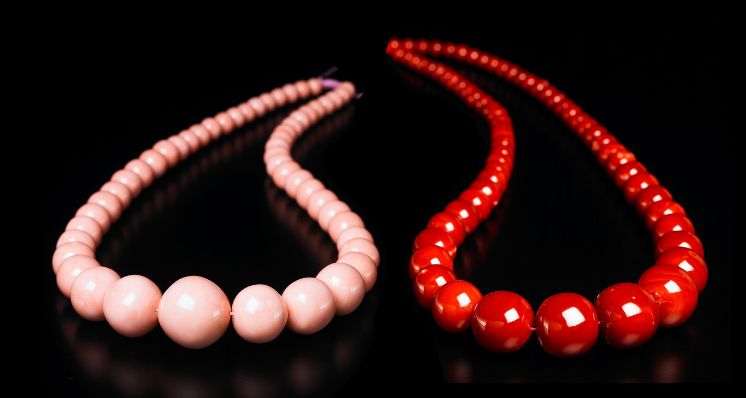 Inspired by Pantone’s ‘Color of the Year 2019’, Rui Galopim de Carvalho FGA DGA dives into the underwater world of precious coral and addresses some of the misunderstandings around its use in the jewellery industry.

The colour of many precious corals has been announced as the ‘Color of the Year 2019’ by Pantone, the US-based company known for its proprietary colour system widely used in the printing industry. Under the name ‘Pantone 16-1546 Living Coral’ this colour code alludes to the pink to red colour that is commonly associated with corals. A clarification is therefore in order to properly understand what it is meant by coral in the jewellery industry.

Coral is the collective name that has been used to describe a very large number of species of cnidarians of the Anthozoa class. Among these more than 7,300 species, we encounter the endangered shallow-water coral species in Australia’s Great Barrier Reef and elsewhere that have been suffering from bleaching and death as a result of climate change and ocean acidification.

This dramatic situation for the equilibrium of the planet’s marine ecosystems has negatively impacted on the reputation of coral as a luxury product. It happens that the corals used in the jewellery industry do not live in the same ecosystem as those endangered reef corals. This is why those that are used jewellery and decorative arts have been designated as ‘precious corals’ by CIBJO, the World Jewellery Confederation, separating them from the ‘common corals’ and even more dramatically from the endangered reef corals.

What are Precious Corals?

These are corals most used in high-end jewellery and decoration and are limited to species belonging to the Corallidae family, particularly from the genus Corallium, Pleurocorallium and Hemicorallium. It is in some of these groups that we can find the red and pink, sometimes salmon-coloured and often white varieties with porcelain like lustre after polishing that relate to this year’s Pantone colour. 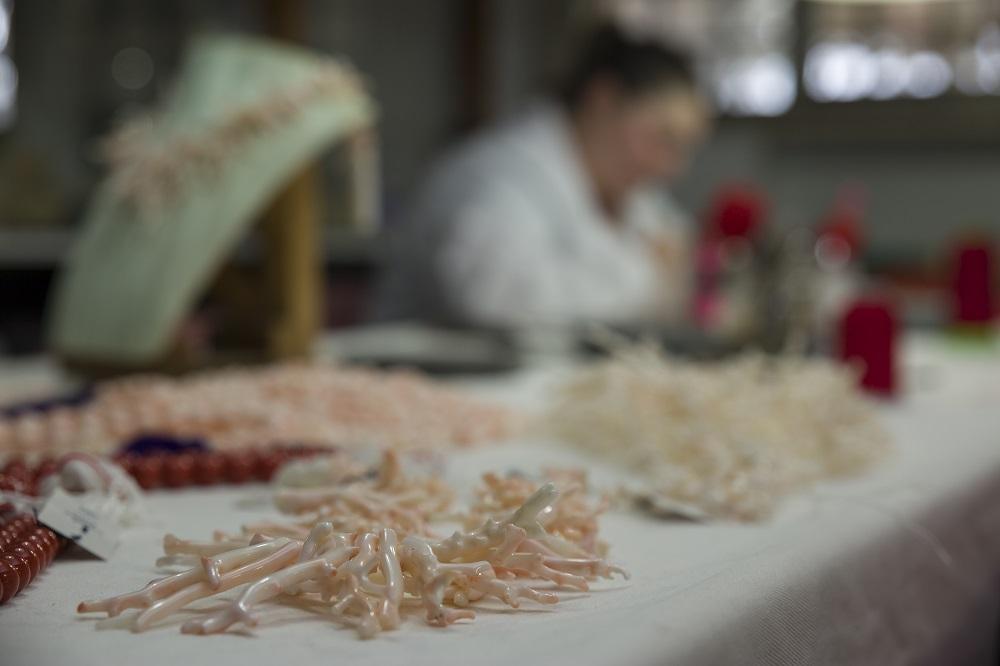 Although a few varieties of red and pink coral were listed for the monitoring of the trade in Appendix III of CITES at the request of China in 2008 (Corallium elatius, C. japonicum, C. konojoi and C. secundum[sic]), no precious corals are listed in the more restrictive CITES Appendixes I and II.

It must be said that the recommendation for monitoring expired in 2013, being extended until 2016, and that for the next CITES meeting in 2019, no further action is to be proposed for precious corals. Current fishing regulations in the Mediterranean, Taiwan and Japan have played an important role in resource management of precious corals and more initiatives are being implemented to further the issue.

Let’s then establish what are the precious coral species currently recognised by the trade:

Corallium japonicum (Aka, Moro or Oxblood coral), the dark red to very dark red corals with a lengthwise white interior which live at depths of 80 to 300 in Japan

Pleurocorallium elatius comprising of two varieties: the so called Momo, Cerasuolo or Satsuma coral, a bright red, salmon, orange and flesh colour with a lengthwise white interior and its albino variety, known in the trade as Angel Skin, Boké or Magai coral, a delicate flesh pink, with different colour intensities, which live at depths of 150 to 300 meters mainly off the coasts of Japan and Taiwan

Pleurocorallium konojoi (Pure White or Shiro coral), the milky white and sometimes with red or pink specks, that live at depths of 80 to 300 meters in the South China Sea and off the coast of Hainan

Pleurocorallium secundum (Midway, Rosato or White/Pink), the veined white or pink, and sometimes with red specks, or uniform clear pink, that lives at depths of 400 to 600 meters off the coasts of Hawaii and Midway Island

Hemicorallium laauense (Deep Sea or Shinkai coral), the bright white, clear pink or white pomegranate with red veins or spots which live at depths of 1000 to 2000 meters off the coast of Midway Island, north-west of Emperor Seamount

Hemicorallium regale (Garnet coral), the pomegranate colour with different shades of uniform pink that live at depths of 350 to 600 metres off the coast of Hawaii

Hemicorallium sulcatum (Misu, Missu or Miss coral), the pink to violet uniform colour which live at depths of 100 to 300 metres in the Philippines northern coastal waters

Corallium rubrum (Sardinian or Mediterranean coral), the historically and culturally famous uniform red with medium to strong saturation that live at depths up to 1,000 metres (harvested only bellow 50 meters) in the Mediterranean and in the Atlantic Ocean off the coast of North Africa, including in the waters of the Canary Islands and Cape Verde 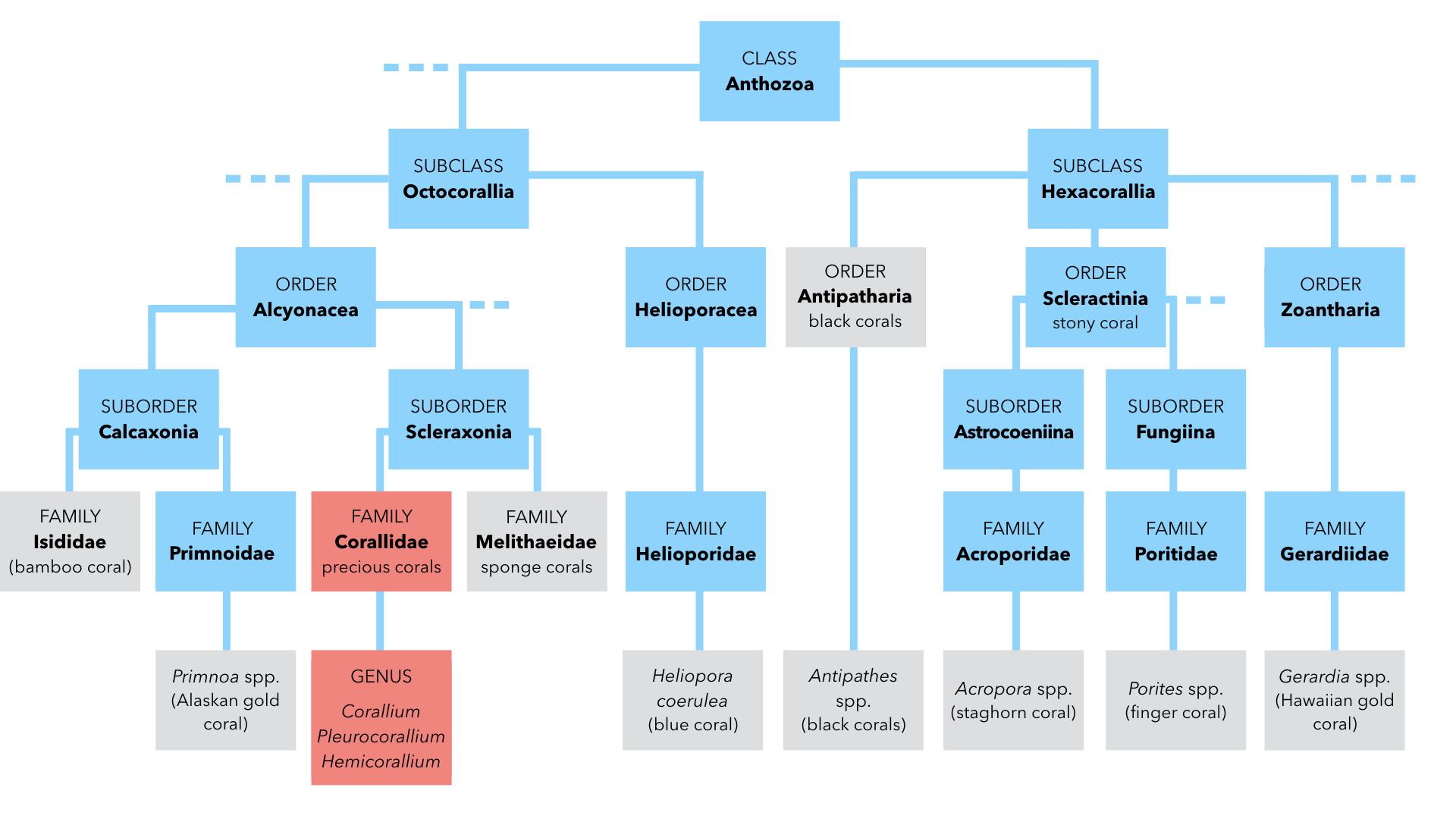 The taxonomy of precious corals (in Pantone 'Living Coral' colour) and Common corals (in grey).

What are Common Corals?

Apart from the above mentioned Corallidae family species, there are a few other corals that have been used for decoration and in jewellery. These, defined as common corals, include mostly calcareous types, like sponge corals, bamboo corals and blue corals as well as black and golden corals, which have non-calcareous exoskeletons. Many of these must undergo treatment (e.g. bleaching, dyeing, impregnation) to be used as gem materials.

Reef coral preservation should be on the top of the agenda not only of the jewellery industry but also of society as a whole, mainly by reducing the carbon impact of civilization that is responsible for climate change and ocean acidification. 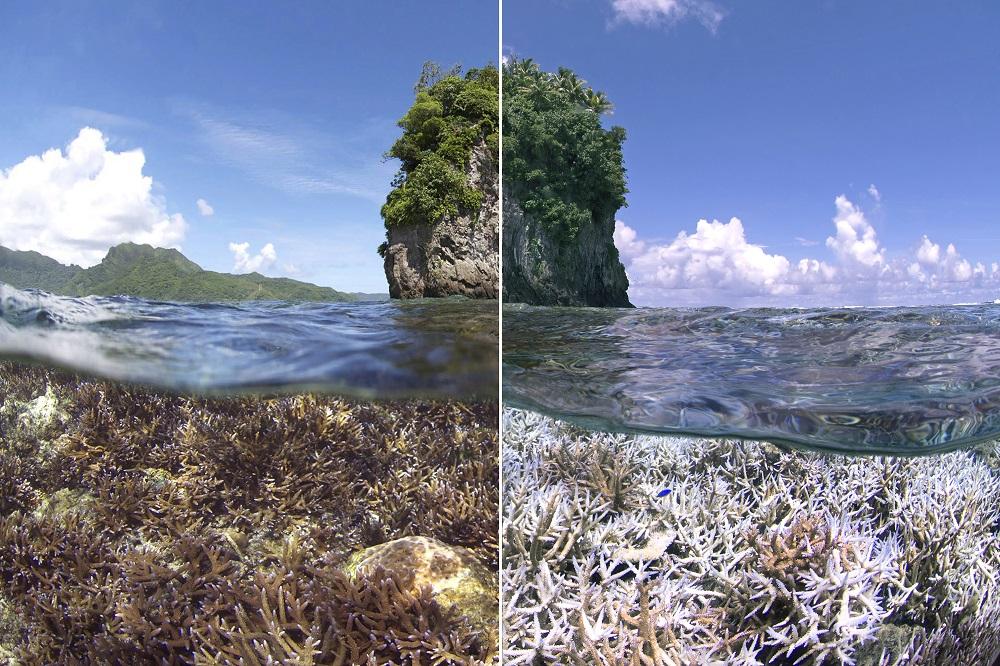 The dramatic effects of bleaching in coral reef (before and after). Image courtesy of The Ocran Agency / XL Catlin Seaview Survey/Coral Reef Image Bank.

CIBJO recently argued through its Coral Commission president Vincenzo Liverino under the banner of a ‘Promise of Sustainability’ at the 21st FEEG Symposium and CIBJO Seminar on Responsible Sourcing and Sustainability held at the VicenzaOro show, Italy in January, that it is a task of the industry and first of all of the coral industry to set an example by embracing the ‘Jewellery Industry Measurement Initiative’ promoted by CIBJO to help companies within the jewellery industry understand their environmental impact, reduce their carbon footprint, and protect themselves and the industry as a whole.

The need for education of both the trade and the consumer in these matters is therefore of prime importance to correct what was a lack of consistency in the terminology used to describe precious coral, to inform the public of about the biology, ecology, history and legacy of precious coral and to raise public awareness of issues related to the sustainability of coral in general, and precious coral in particular, predominantly in light of the challenges posed by global warming and ocean acidification.

Do you want to broaden your knowlege of organics and gemstones? Discover Gem-A Short Courses and Workshops, or explore our Gemmology Foundation and Diploma Courses.

This article was first published in the Spring 2019 edition of Gems&Jewellery. To find out more and read the magazine archive online, please click here.

Images courtesy of the author unless otherwise stated.

Tagged under
More in this category: « How to Identify Antique Edwardian Jewellery Top 10 Luxury Brands: The Jewellery Connoisseur's Wish List »
Tweet
Become a Gem-A Member
Apply to become a Gem-A Member
Subscribe to our Newsletter
Keep updated with Gem-A
Sign Up
Get in Touch
Can't find what you're looking for?
Contact Us