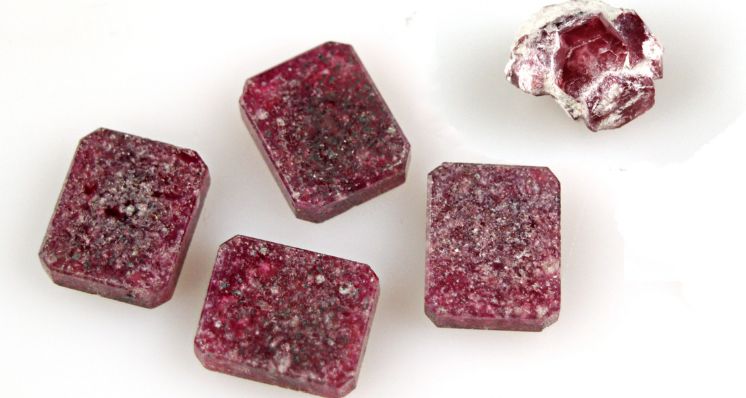 Red beryl is the rarest variety of the large beryl family whose better-known varieties include emerald and aquamarine. A cyclosilicate incorporating beryllium and aluminium, crystals of red beryl form in the hexagonal crystal system. These crystals rarely exceed two inches in length, and the largest crystal ever found weighed 54 carats.

To put its rarity into perspective, only one red beryl is mined for every 150,000 diamonds, and a two carat red beryl is considered as rare as a 40 carat diamond. The largest known faceted red beryl is 8.0 carats.

The colour of red beryl ranges from a pleasing raspberry-red to an intensely saturated purplish-red. This colouration is believed to be the result of replacement of aluminium atoms by trivalent manganese (Mn3+) during the growth process of the crystal (as opposed to its paler cousin, morganite, whose originally divalent Mn impurities were exposed to radiation after their original crystallisation, altering their valent states to trivalent).

Where is Rare Red Beryl Found?

Red beryl is only found in the USA and forms as a result of an unusual set of geological circumstances. Ancient layers of rock were disrupted by volcanos approximately 34 million years ago. These created cracks and fissures which were later expanded by further geological movement, allowing lava to flow through them. 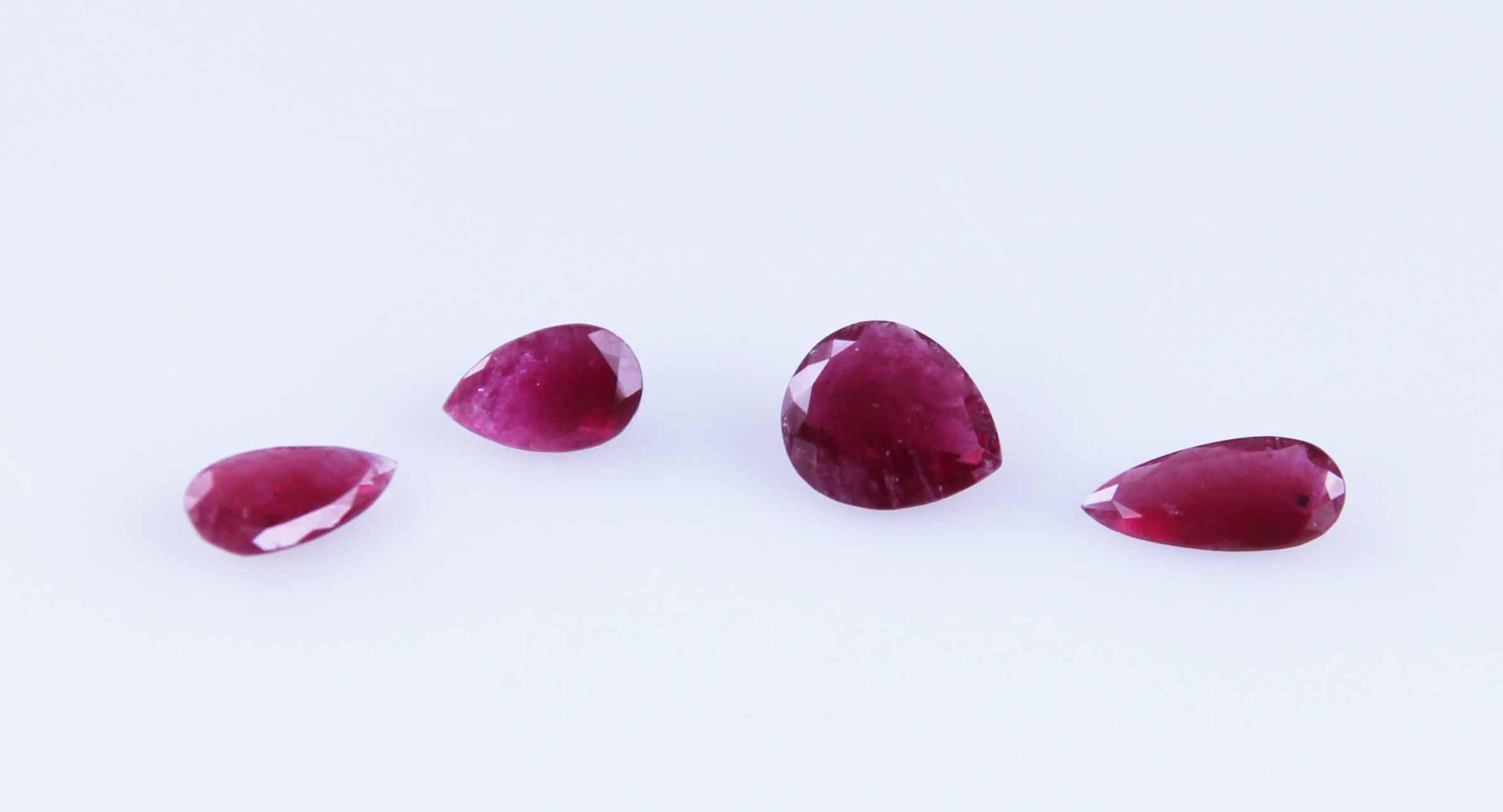 Many years later, the combination of groundwater percolating through the rhyolitic volcanic rock with gases released from lower levels of the cooling rhyolite itself started a hydrothermal reaction which permitted the formation of red beryl along with other alteration minerals in a host rock of clay (itself another alteration material).

When was Red Beryl Discovered?

Discovered by Maynard Bixby (1853-1935), a bookkeeper turned miner, these stunning crystals were initially brought to light at Maynard’s Claim in the Thomas Range, Utah in 1904. They were initially named ‘bixbite’ in honour of their finder by Alfred Eppler in 1912, but this term has fallen out of favour and lately been discredited by CIBJO because of the risk of confusion with bixbyite (a cubic, black, manganese iron oxide also discovered by Bixby in 1897).

This is not the first time that red beryl has suffered from confusion of names or even misuse of nomenclature. It has been marketed as ‘red emerald’ by a number of sources – a term which must be decried by any gemmologist of good standing, but which does have its roots in the history of this stone.

After Bixby’s early discovery in 1904, a second discovery of red beryl was made by Lamar Hodges, an unsuccessful uranium prospector, at what came to be known as the ‘Ruby Violet’ or ‘Red Beryl’ mine in Utah. This is the only locality in the world which reliably provides gem-quality red beryl, and as of 2003, around 60,000 carats had been mined, of which a mere 10% could be faceted.

Purchased by the Harris family in 1976, the mine (along with its gem-quality crystals of red beryl) stayed in the family until 1994, at which point they signed a lease with Kennecott Exploration Company for three years. Kennecott promptly embarked on a systematic process of mapping and sampling the area to determine the potential yield of the resource.

Unfortunately, due to downsizing, this work was not realised by Kennecott itself. Instead, in 1997, GMI (Gemstone Mining Inc.) stepped in and extended the lease for another year at a cost of $10M. GMI also acquired all the stones that had been successfully mined by Kennecott; selling these and subsequent finds to a Gibraltar based company called Red Emerald Ltd.

To add even more weight to the use of the term ‘red emerald’, both Red Emerald Ltd and GMI were funded by the Canadian investor, Red Emerald Resources. The mine has now reverted to the full ownership of the Harris family.

The term ‘red emerald’ is now frowned upon by the FTC, who state that "it is unfair or deceptive to mark or describe a product with an incorrect varietal name". Yet still multiple terms for red beryl abound. You may also come across it being referred to as ‘raspberyl’; meaning a variety of beryl which has a raspberry red hue, a term which is also erroneously given to pezzotaite, a similar looking caesium analogue of beryl found in Madagascar in 2002.

Common inclusions in red beryl include feathers and fractures, along with mineral inclusions of quartz, feldspar, hematite and bixbyite. Hexagonal colour zoning may also be seen in some samples. Moderate pleochroism of purplish-red to orange-red may generate confusion with ruby, but the RI of 1.560 to 1.676 with birefringence between 0.005-0.009 should easily separate these two materials.

There is a synthetic red beryl on the market, which was produced between the mid-1990s and 2016 by the Russian Institute of Crystallography in Moscow. Distinction between this hydrothermally grown material and the natural red beryl may be made by comparison of their internal features – the distinctive chevron banding commonly known as ‘heat haze’ or ‘zig-zag zoning’ is characteristic for this synthetic, along with the absence of any natural inclusions.

Red beryl is not widely seen in the high jewellery market, in part due to its rarity and the relatively small size of its fashioned crystals. However, in 2017, Singapore based jeweller Caratell put together a high jewellery collection which included six pieces (four rings and two pairs of earrings) set with red beryls. The largest of these stones was a 2.20 carat emerald-cut red beryl set with 2.32 carats of diamonds in the ‘Sun Ray’ ring.

You can also take your first steps into gemmology with a Gem-A Workshop or Short Course.

To find out more, simply email our Education department on education@gem-a.com.

More in this category: « Buying Guide: Which Gemstones are in the Beryl Family? Getting to Grips with Multi-Coloured Gemstones »
Tweet
Become a Gem-A Member
Apply to become a Gem-A Member
Subscribe to our Newsletter
Keep updated with Gem-A
Sign Up
Get in Touch
Can't find what you're looking for?
Contact Us