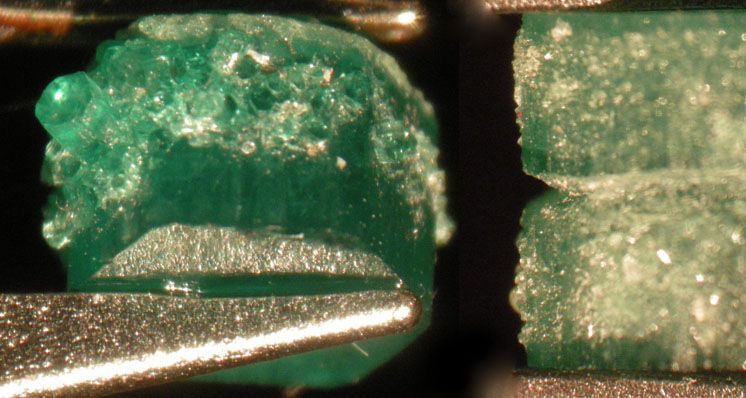 Guy Lalous ACAM EG investigates the historical account of synthetic emeralds grown by W. Zerfass. Summarising a technical article from The Journal of Gemmology, focus is centred upon the growth technology and geological properties of one of the world's most beautiful gemstones.

Emerald is the green variety of the mineral beryl, contains beryllium and is coloured by chromium and vanadium.

These trace elements are normally concentrated in quite different parts of the Earth’s crust, and only complicated geological processes enabled these contrasting elements to find each other and to crystallize into one of the most beautiful gemstones.

What about synthetic emeralds?

Synthetic emeralds share virtually all of the chemical, optical, and physical characteristics of their natural counterparts. Two types of synthetics are produced: the flux grown version became available in the 1930s, hydrothermal synthetic emerald came on the scene in 1960. They often display inclusions that are visual evidence of their artificial growth. Synthetic emeralds can be distinguished from natural ones by trace element analysis.

What are the main properties of synthetic emeralds?

This paper about synthetic emeralds grown by W. Zerfass gives us an insight on growth technology and properties, the historic development of flux-grown emerald in Germany over the course of six decades and delves into some historical facts. The study is based on the examination of five faceted samples (0.24–1.02 ct) and two crystals (0.23 and 0.40 g) of Zerfass synthetic emeralds. 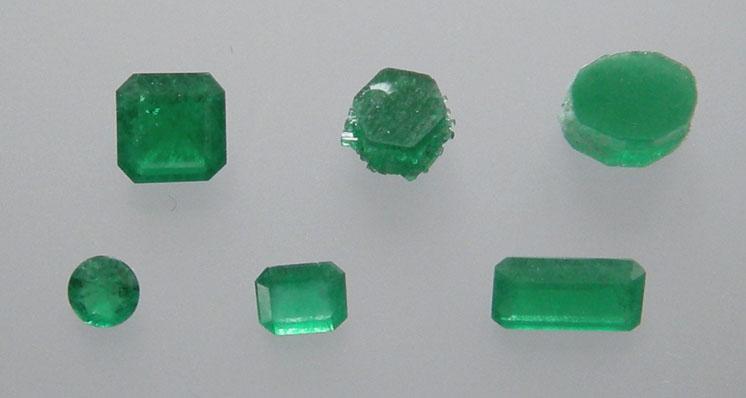 What about the crystal morphology of the two Zerfass crystals?

Of the two crystals examined, the larger one showed a short prismatic to thick tabular habit consisting of a 12-sided prism and two basal faces. First- and second-order hexagonal prisms m {101 ̅0} and a {112 ̅0} were present in combination with the basal pinacoid c {0001}. Tiny polycrystalline material, most likely small synthetic emerald crystals grown by spontaneous nucleation, covered the prism faces. A groove traversed all prism faces, encircling the crystal. The smaller crystal also had a short prismatic form, with six dominant prism faces and one basal pinacoid. The six-sided prism also showed some smaller additional prism faces that would correspond to a 12-sided prism if fully developed. Small prismatic synthetic emerald crystals covered the prism faces and a deep groove surrounded the crystal.

What are the gemmological properties of the Zerfass synthetic emeralds?

The synthetic emeralds were slightly bluish green in colour, displaying pleochroism of blue-green parallel to the c-axis and green to slightly yellowish green perpendicular to the c-axis. The RIs of the faceted samples ranged from 1.558 to 1.559 for ne and from 1.562 to 1.563 for no, with a birefringence of 0.004. The SG values were between 2.65 and 2.66. Microscopic examination revealed a cellular web-pattern of residual flux parallel to the c-axis. At higher magnification, the tiny particles of residual flux that formed the pattern could be resolved, and minute two-phase inclusions (residual flux with contraction bubbles) were frequently apparent.

What are the Chemical and spectroscopic properties of the Zerfass synthetic emeralds?

The trace elements revealed by EDXRF spectroscopy showed a homogeneous pattern in all seven samples. Chromium was the main colour-causing trace element, with small traces of Fe also present. No V or Ni was detected. Molybdenum peaks in the EDXRF spectra indicate that the synthetic emeralds were grown from a Mo-bearing flux. Unexpectedly, characteristic X-ray lines for Au were recorded for both rough samples, but only when analysed with the X-ray beam aimed toward the prism faces and incorporating the surface grooves. Previously examined Zerfass synthetic emeralds by one of the authors showed the typical Cr3+ spectrum in UV-VIS.

What is known about the Zerfass production technology?

Synthetic emerald plates sliced parallel to the basal face were used as seeds and suspended in a Mo-bearing flux for crystal growth. The combination of the grooves seen traversing the prism faces of the crystals and the traces of gold detected by EDXRF spectroscopy indicate that circumscribing gold wires were used to suspend the seed plates in the flux. The growth zoning parallel to the basal face suggests that several interruptions took place in the growth process. Similar to the IG Farben process, crystal growth was performed in platinum crucibles, with the nutrient subdivided into two parts.

Compounds of Al, Be and Cr were placed in the bottom of the crucible, and natural quartz crystals floated on top of the lithium molybdate melt. No colour-causing trace elements other than Cr (such as V or Ni) were ever added by Zerfass and Jaeger to the nutrient. The method did not involve the use of a temperature gradient within the crucible. By 1956, Zerfass and Jaeger had altered their process to one that involved using seed plates and separating the nutrient into two components, with quartz floating on top of the lithium-molybdate melt. A special holder for the suspended seed plates was placed between the ingredients at the bottom of the crucible and the quartz floating on top of the melt.

During early experiments, natural aquamarine or natural emerald was used to make seed plates. Crystal growth was mainly in a direction parallel to the c-axis. The Zerfass process was performed without interruption for a period of about 2–3 weeks. In the final years of their partnership, Zerfass and Jaeger also performed experiments aimed at reducing the concentration of trapped flux particles and obtaining larger and cleaner material. Experiments in crystal growth took place from approximately 1952 to 1962, and the first faceted synthetic emeralds were presented to the public in 1963. Production continued on a small scale during the 1960s and early 1970s, and then terminated in ~1973.

The historical development of flux-grown synthetic emerald in Germany occurred over the course of six decades and involved three principal producers: Nacken, IG Farben and Zerfass. Each producer employed a process for growing synthetic emerald based upon dividing the nutrient into two components. Specifically, BeO, Al2O3 and colour-causing ingredients were added to the melt separately from SiO2 (quartz or vitreous silica). All three producers started with employing natural colourless beryl as seed material.

The seeds were suspended in a molybdate or molybdate-vanadate flux, primarily in gold or platinum crucibles. In the IG Farben process, additional nutrient was added to the bottom of the crucible every 2–3 days. Nacken and Zerfass used only Cr-bearing compounds as colour-causing trace elements. IG Farben, in contrast, added nickel carbonate to the melt, and this component was responsible for the desired slightly yellowish green colour of the Emeralds.

For those Nacken synthetic emeralds grown from vanadate-molybdate fluxes, V may make a small contribution to the otherwise Cr-based colour. With IG Farben’s announcement in 1935, it became public knowledge that growing synthetic emeralds of facetable size was possible.

This is a summary of an article that originally appeared in The Journal of Gemmology entitled 'Synthetic Emeralds Grown by W. Zerfass: Historical Account, Growth Technology and Properties’ by Karl Schmetzer, H. Albert Gilg and Elisabeth Vaupel 2017/Volume 35/ No. 5 pp. 404-414