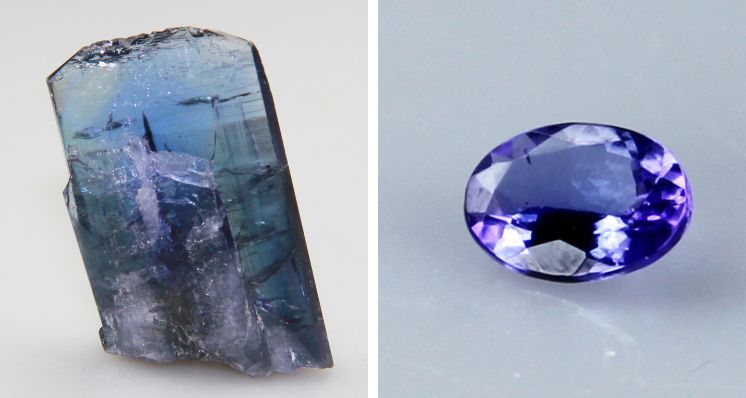 Found in 1967 at the foothills of Mount Kilimanjaro, tanzanite is a relatively new stone and is the purplish blue variety of zoisite. Zoisite is a species of gemstones which share the same chemical composition; zoisite’s composition is calcium aluminium silicate with hydroxyl.

Read more: Why Tanzanite is the Birthstone of December

Today, tanzanite can only be found in the Merelani Hills of Tanzania. A year after its initial discovery it was named after the country in which it was found and introduced to the market by Tiffany & Co., who transformed this previously unknown gemstone into a highly fashionable jewel. Testament to this stone’s huge popularity, in 2002 tanzanite became adopted as a new birthstone for December by the American Gem Trade Association (AGTA).

The Natural Availability of Tanzanite

Tanzanite is a relatively abundant gemstone. Based on a study conducted by TanzaniteOne Mining Ltd in 2012, 270 million carats are mined per year, which equates to 54 tonnes. The current projections suggest the mines will continue to produce gem quality material at the same rate for another 23 years, providing they can progressively dig deeper and reach all the potential material remaining. 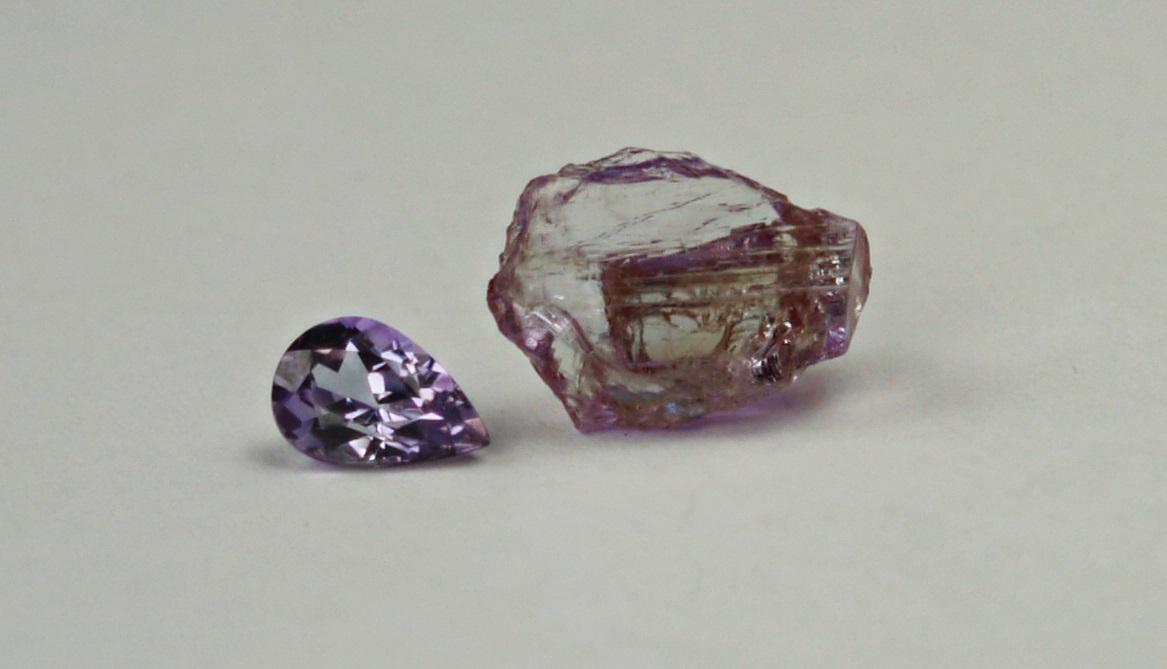 A pear-cut zoisite alongside a rough zoisite crystal. Image: Gem-A.

Currently, there are four main commercial mines for tanzanite in Tanzania, separated into blocks A, B, C and D. Each block is owned by a different company; the case study above was carried out on block C, which is by far the largest block on the site, being bigger than the other three mines combined.

Tanzanite gains its distinctive purplish blue colour from the trace elements of vanadium and chromium present within its structure. Tanzanite shows very strong pleochroism, which is an optical property and a term used by gemmologists to describe different colours seen in the same material when viewed from different directions. The pleochroism in tanzanite is so strong it is visible by just turning the stone and viewing it through different directions without the aid of a dichroscope. 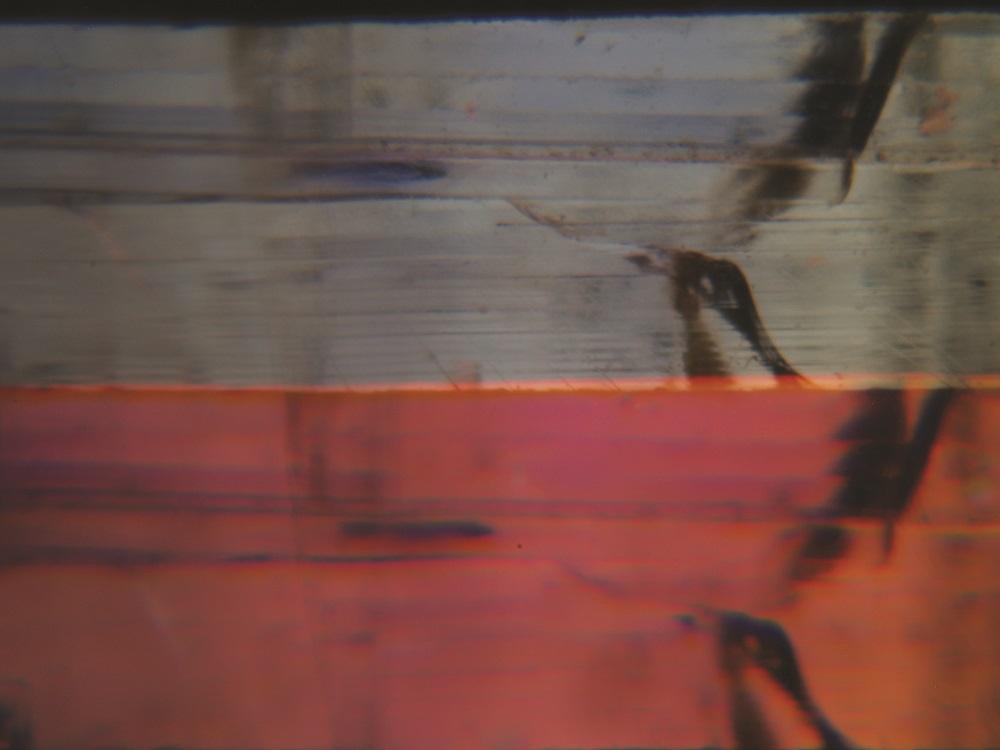 Providing tanzanite has not been heat-treated, it will show three pleochroic colours: red-violet, deep blue and a greenish yellow. However, if heated above circa 400°C to 500°C, the greenish yellow colour is removed or substantially reduced and the bluish colour deepens.

The vast majority of tanzanite on the market today is heat-treated to enhance its colour and marketability. Indeed, tanzanite has proven to be a favourite of the rich and famous in recent years, with celebrities such as Beyoncé, Sarah Jessica Parker and Penelope Cruz having been pictured wearing the gem. The Duchess of Cambridge has also on many occasions been spotted wearing a matching set of pear-cut tanzanite earrings and necklace. 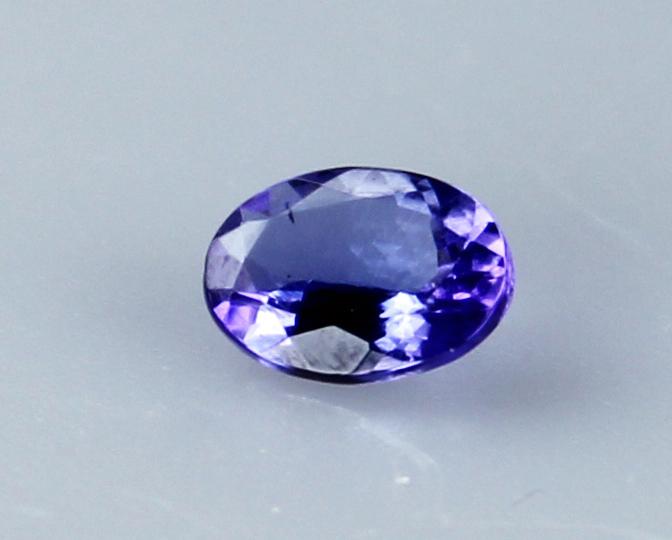 Currently there is no known method for creating synthetic tanzanite. But keep an eye out for synthetic forsterite, which can be used as convincing simulant at first glance. Like tanzanite, it is also strongly pleochroic, however the colours seen when viewed in the different directions are vivid blue and purple, which helps to differentiate between the two stones.

The Value of Tanzanite

On average tanzanite is quite an expensive gemstone; specimens weighing one carat or less will reach prices of about £225 to £250 per carat. Most faceted tanzanite seen commercially on the market is below five carats, while faceted stones over 30 carats are more seldom seen.

The average price of good quality, untreated tanzanite over five carats is about £900 to £1,100 per carat, while smaller sizes around two to three carats can achieve prices of between £350 to £580 per carat. With this in mind, prices do vary depending on colour and treatments, as well as on the particular suppliers or retailers from which you choose to purchase.

Tanzanite crystals are usually prismatic and quite well formed; any crystals over 50 carats are considered large and are usually sold to mineral or crystal collectors rather than being cut. The largest piece of tanzanite rough reported in the press was found in 2005 by TanzaniteOne Mining Ltd, weighing in at 16,839 carats (7.43lbs or 3.37kg) and measuring approximately 21.8cm x 8cm x 7.11cm, making it a hugely impressive specimen. 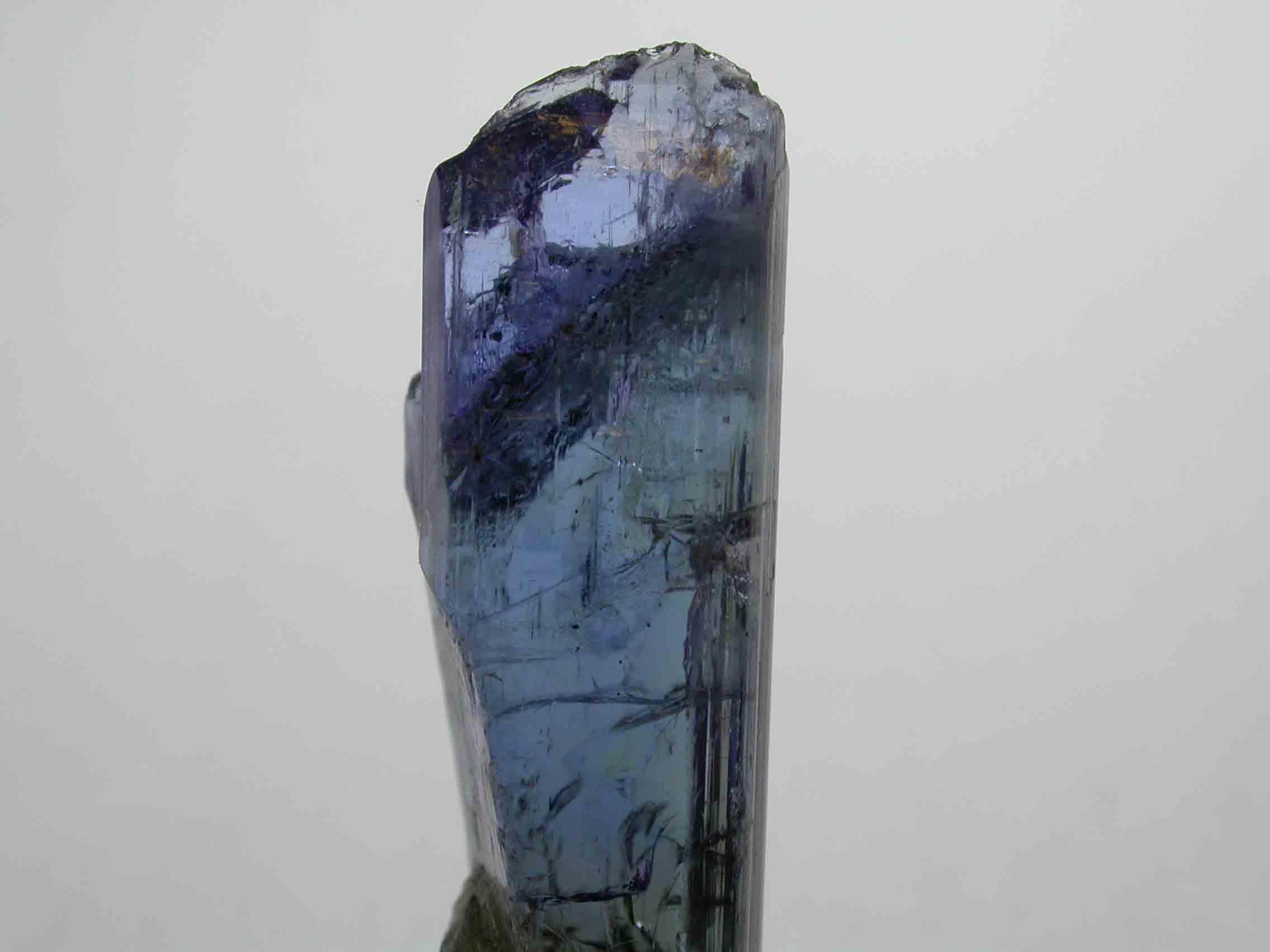 An example of a large rough tanzanite crystal. Image by Pat Daly FGA.

However, the largest tanzanite ever sold at auction is the 423.56 Namunyak Tanzanite, which was set into an 18-carat white gold necklace accompanied by 53 carats of diamonds by jewellery designer Kat Florence; the piece fetched over $300,000 USD at a charity sale in 2016 to raise funds for victims of the Nepal earthquake in 2015.

Before purchasing a piece of tanzanite jewellery it is important to bear in mind that tanzanite measures between 6 to 7 on the Mohs scale and therefore is not a particularly hard stone. As such, tanzanite can be more liable to scratches and damage and consequently may not be the most suitable stone for wearing as an everyday ring.

If you decide to buy a tanzanite use a 10x loupe to examine the cut, clarity and any presence of chips or cracks. It is also advisable to compare a number of stones to gauge the hue and saturation of colour. By taking these short steps you can better ensure that you will walk away with a good quality tanzanite specimen.

Start your gemmology journey today with the Gem-A Gemmology Foundation course or one of our many Short Courses and Workshops. Contact education@gem-a.com to find out more.

Tagged under
More in this category: « Buying Guide: Saltwater versus Freshwater Pearls Famous Gemstones: The Star of India Sapphire »
Tweet
Become a Gem-A Member
Apply to become a Gem-A Member
Subscribe to our Newsletter
Keep updated with Gem-A
Sign Up
Get in Touch
Can't find what you're looking for?
Contact Us