Deep in the Australian outback miners labour tirelessly through tons of rock in the hope of finding a fine source of boulder opal. But what exactly is boulder opal, and why is it so desirable? Here, Gem-A Stone Curator and ODL Tutor Barbara Kolator FGA DGA explores this highly-prized desert gem.

What is Boulder Opal?

It has been well-documented that this spectacularly colourful form of opal is found primarily in Queensland, Australia (other locations include New South Wales, Canada and Brazil). It is reputed to be harder and more stable than most precious opal.

Some highly desirable and popular colours are blue and green but red is always the most valuable and rarest colour. When the viewing angle is changed the colours may also change.

All opal has a hardness of 6 on the Mohs scale.

What is so Special about Boulder Opal?

Boulder opal from Queensland is found in the areas around Winton, Quilpie and Yowah. The opal is usually found in fractures and spaces in otherwise impermeable sandstone or ironstone.

Boulder opal typically displays bright and vibrant colours. The natural iron stone base of boulder opal gives added stability and adds to the depth of colour produced in the gems. The varied and interesting natural shapes in which the gems occur make for added interest and unusual jewellery. 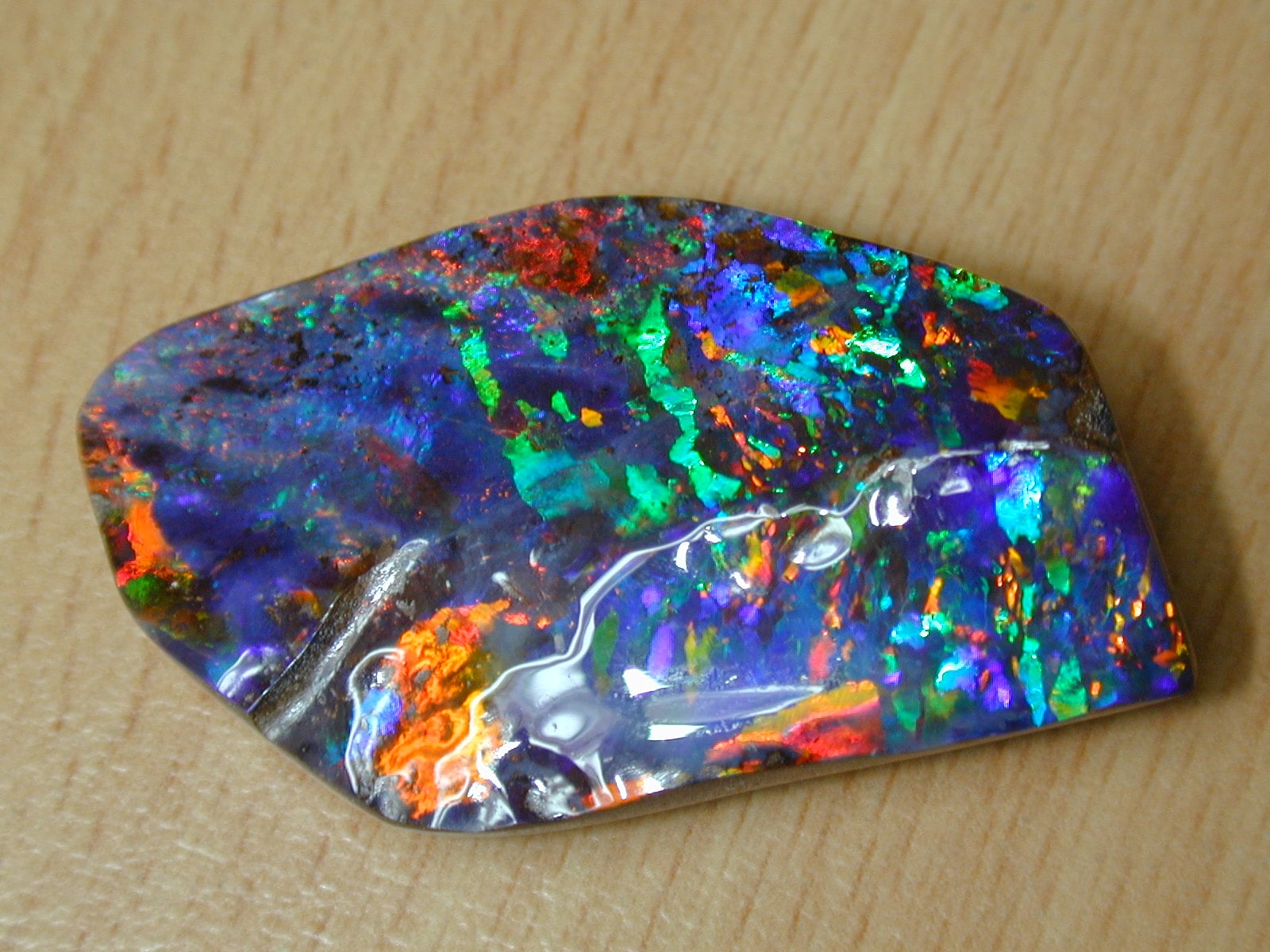 Different areas of Queensland as well as layers in the same formation may produce slightly different types of opal according to the very specific conditions in which it was formed.

Yowah produces an opal which looks like a nut. ‘Fairy’ opal is when is a small smattering of opal in sandstone; it can only be seen by wetting the stone and it gives the impression of ‘fairy dust’. To keep this effect the opal is treated with sugar and acid to darken the stone and give contrast for the colour to show up. This is then sealed with varnish to make durable jewellery.

How Does Boulder Opal Form?

Boulder opal is found in cracks, crevices and cavities. Silica from dissolved sand trickled down cracks and crevices in ironstone boulders and the silica precipitated out of solution. Generally, the opal is found within boulders which need to be broken open. These are found in clay layers just above the ironstone. 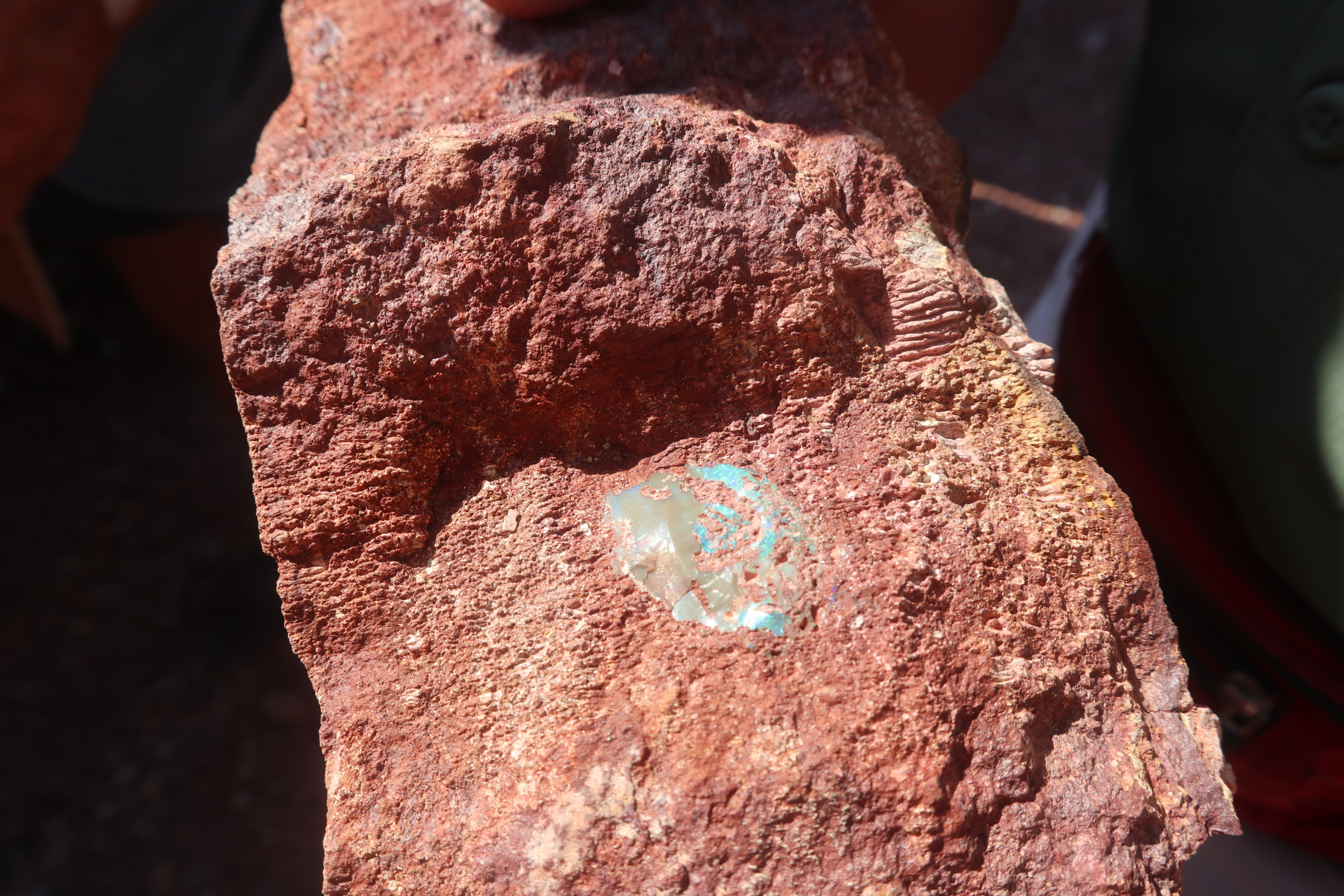 An example of boulder opal in its host rock. Image by Barbara Kolator FGA DGA.

There are many theories of how boulder opal forms, one of them is that it needs the presence of pyrite. When this is dissolved by rainwater it produces sulphuric acid which dissolves silica present in quartz and reacts with feldspar, releasing more silica. Colloidal silica fills fractures in ironstone and solidifies to form opal.

Learn more: Opal for Those Born in October

How is Boulder Opal Mined?

Mining for boulder opal in Queensland is typically carried out by individuals on relatively small claims using an ‘open cut’ process. Firstly, huge earth moving machinery is used to remove the overburden. Once the opal layer and the opal bearing boulders are exposed these are then cracked open to see if they contain any opal.

The opal level is a layer of white clay-like material just below the sandstone; GIA recognize several clay layers and record opals from some of these and from sandstones. There may be several layers within a deposit and each will have a different type of opal. A lot of rock needs to be broken until opal is found. Each boulder opal mine is different and the opal it produces will have different characteristics. 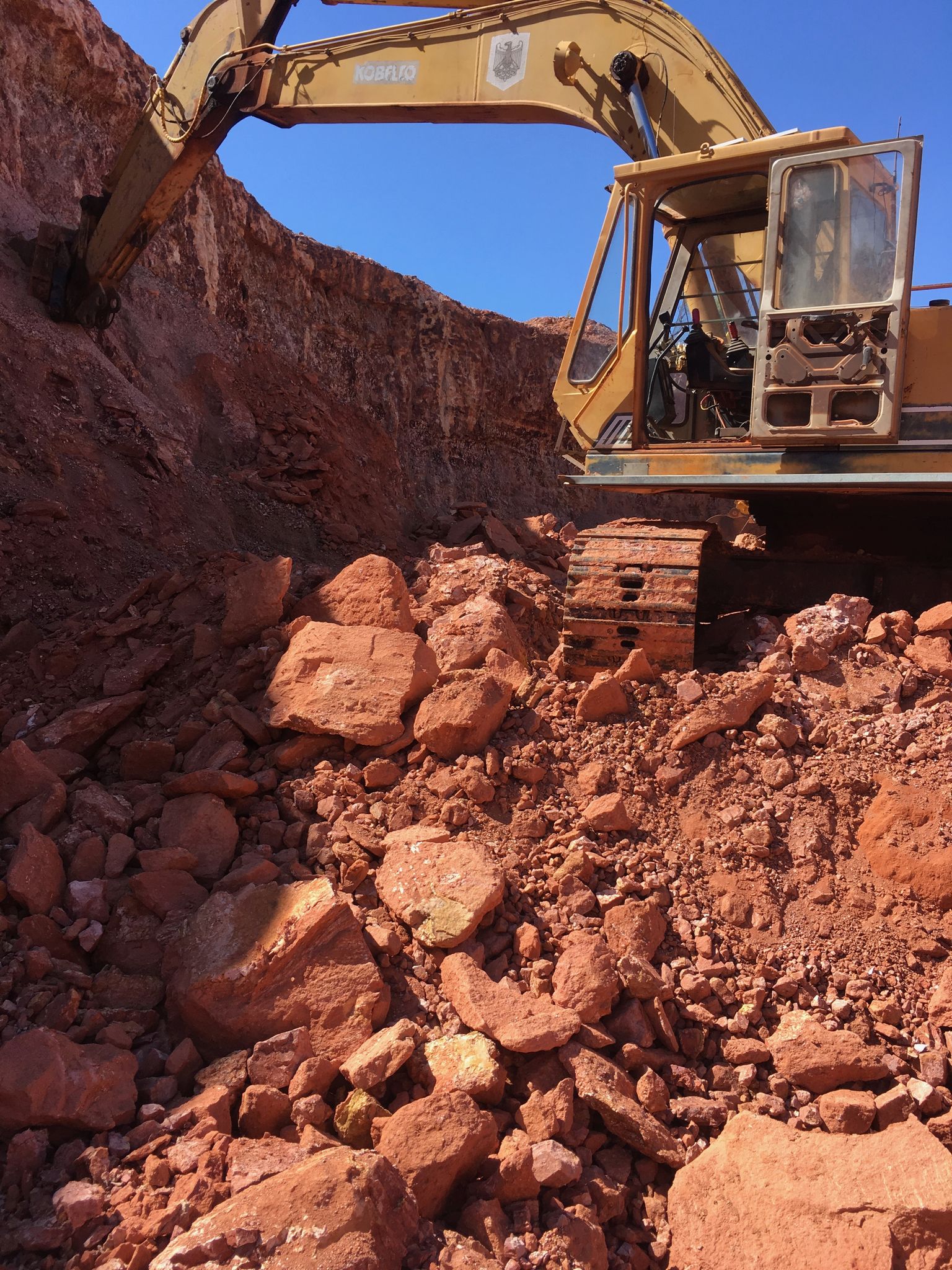 The opal is cut into slabs with a diamond saw. First it is trimmed to expose the opal area and then ground down to leave the face exposed. The face is then sanded using progressively finer grits until a polished surface appears. This is then polished with a leather pad using a cerium or tin oxide paste with water. A lot of this process will be carried out at the mine which adds value to the sale.

Mine camps are not permanent as only temporary buildings can be built on site. Mine leases in Queensland are generally for ten years although they may be renewed depending on various factors.

Read more: What Does it Mean when a Specimen is Opalised?

The miners do everything themselves, move earth, break boulders, sort then cut and polish to some extent. Cutting is generally in a caravan at the site using solar power. Many miners also make jewellery from their own stones.

At the end of the life of the mine or when the lease has to be returned everything must be put back as it was. The land is refilled and the dwellings removed. Vegetation grows naturally in this climate and it is difficult to tell that a mine once occupied the site.

The Value of Boulder Opal

Value of boulder opal is difficult to determine but generally the more colours there are, the more expensive the piece will be. A black opal specimen is more valuable than a light coloured one and the order of colours in terms of value is esteemed to be red followed by orange, then green, blue and lastly purple.

Boulder opal does not need any special care as it is quite stable, resilient and is safe in water. Care needs to be taken not to drop this gem onto a hard surface or chip it. If worn in rings it is always a good idea to remove them before doing any cleaning, gardening or other manual work. 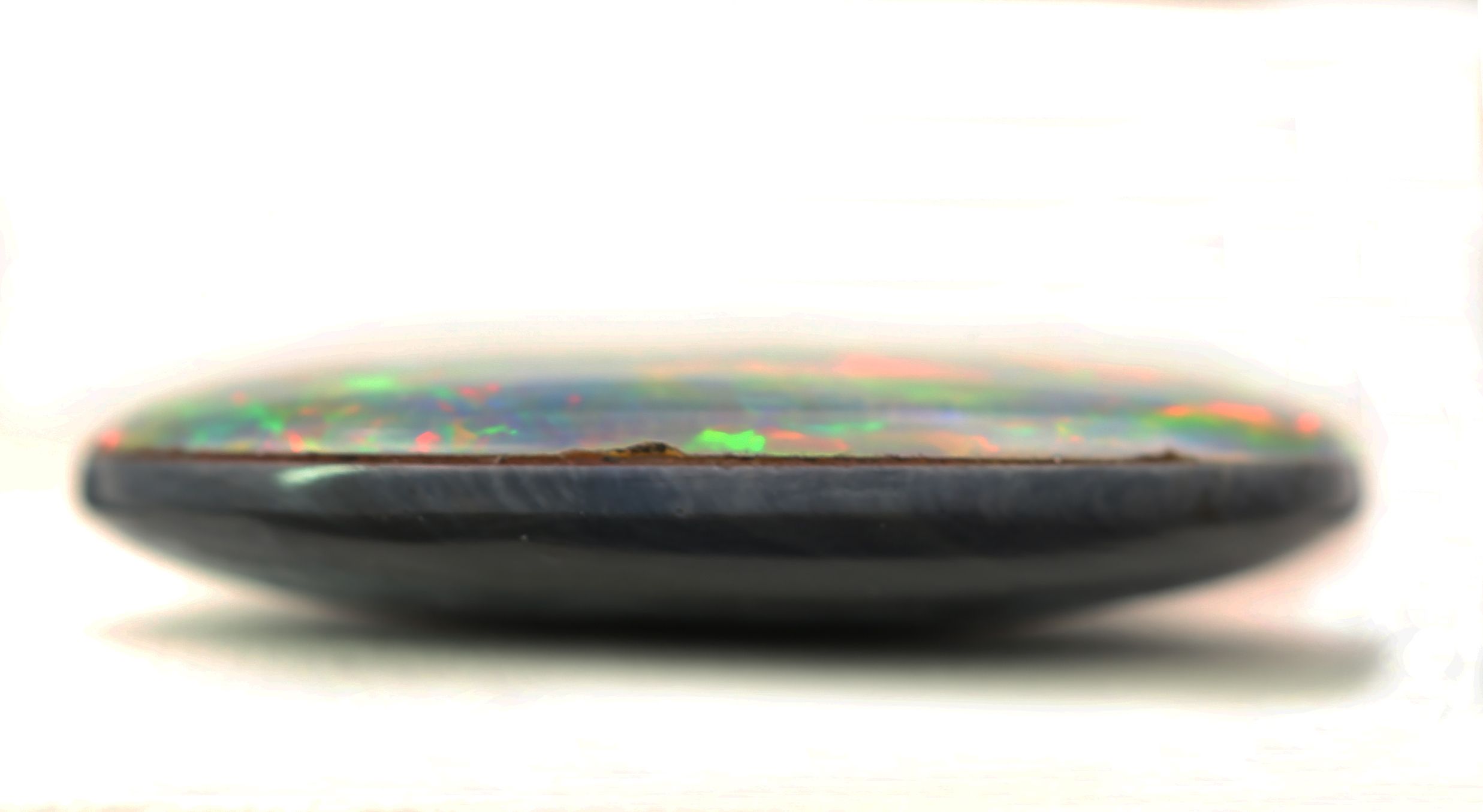 In order to tell if the opal is boulder or a doublet it is necessary to look at the side to see if the edge is undulating. In some cases, an ironstone or sandstone base is used for doublets and triplets, which may be hard to identify when they are set in jewellery.

Find out more about opal on Gem-A's Gem Hub.

Interested in expanding your knowledge on gemmology? Why not consider signing up for our Gemmology Foundation course?

Do you have a passion for diamonds? Become a diamond expert with Gem-A's Diamond Diploma course.

Tagged under
More in this category: « Understanding Specific Gravity and Why it is Vital to Gemmologists
Tweet
Become a Gem-A Member
Apply to become a Gem-A Member
Subscribe to our Newsletter
Keep updated with Gem-A
Sign Up
Get in Touch
Can't find what you're looking for?
Contact Us