We often hear about black opal, but what causes this dark body colour and what contributes to its market value? Here, we take a deep dive into precious black opal and discover where it is mined, how it can be treated and what simulants and synthetics are worth looking out for.

Opals are made of silica SiO2 with up to 20% water (usually closer to 4-10%). They do not possess a crystalline structure; they are amorphous, with no directional optical properties.

Opals form when a hot silica rich solution permeates veins and voids in the ground. They are typically found in volcanic or sedimentary environments. Over a long period, the solution precipitates at low temperatures allowing the gradual formation of layers of minute silica spheres ranging from about 150 to 300nm. If an opal is made up of areas of regularly stacked, three-dimensional groups of spheres of equal size, then a combination of optical phenomena causes patches of spectral colour firing from the opal as it is tilted in the light.

What makes an opal precious?

Opals are defined as precious opals (as opposed to common opals) when they display these flashes of vibrant rainbow colours. This optical phenomenon, unique to opal, is called ‘play-of-colour’. The best precious opals display all the spectral colours from red to violet. This is a feature that led the Roman naturalist Pliny the Elder (Ist c. AD) to describe precious opals in his Natural History as if they were all the gemstones rolled into one:

“This most beautiful of gems combines the fire of the ruby, the brilliant purple of amethyst, and the sea-green of emerald; all shining together in glorious and incredible union.”

The beauty and mystery of this optical phenomenon made opals one of the most precious gems in Antiquity and the Middle Ages. They are sometimes referred to as the ‘queens of gemstones’. The fiery and iridescent qualities of opal have inspired poets like William Shakespeare who, in Twelfth night, crafted a metaphor between the fleeting colours of opal – and taffeta- and the changing mind of Duke Orsino:

“Now, the melancholy god protect thee, and the tailor make thy doublet of changeable taffeta, for thy mind is a very opal.”

Play-of-colour is caused by a combination of two optical effects: diffraction and interference. The minute silica spheres, if regularly stacked and if arranged in groups of equal size, create minute gaps that are of the same size as the spheres. These gaps between the spheres act as small, regular apertures which cause white light to diffract as it passes through them. As light is diffracted, all the wavelengths are spread and become visible as spectral colours. The diffracted wavelengths then interfere to boost certain colours and cancel others. 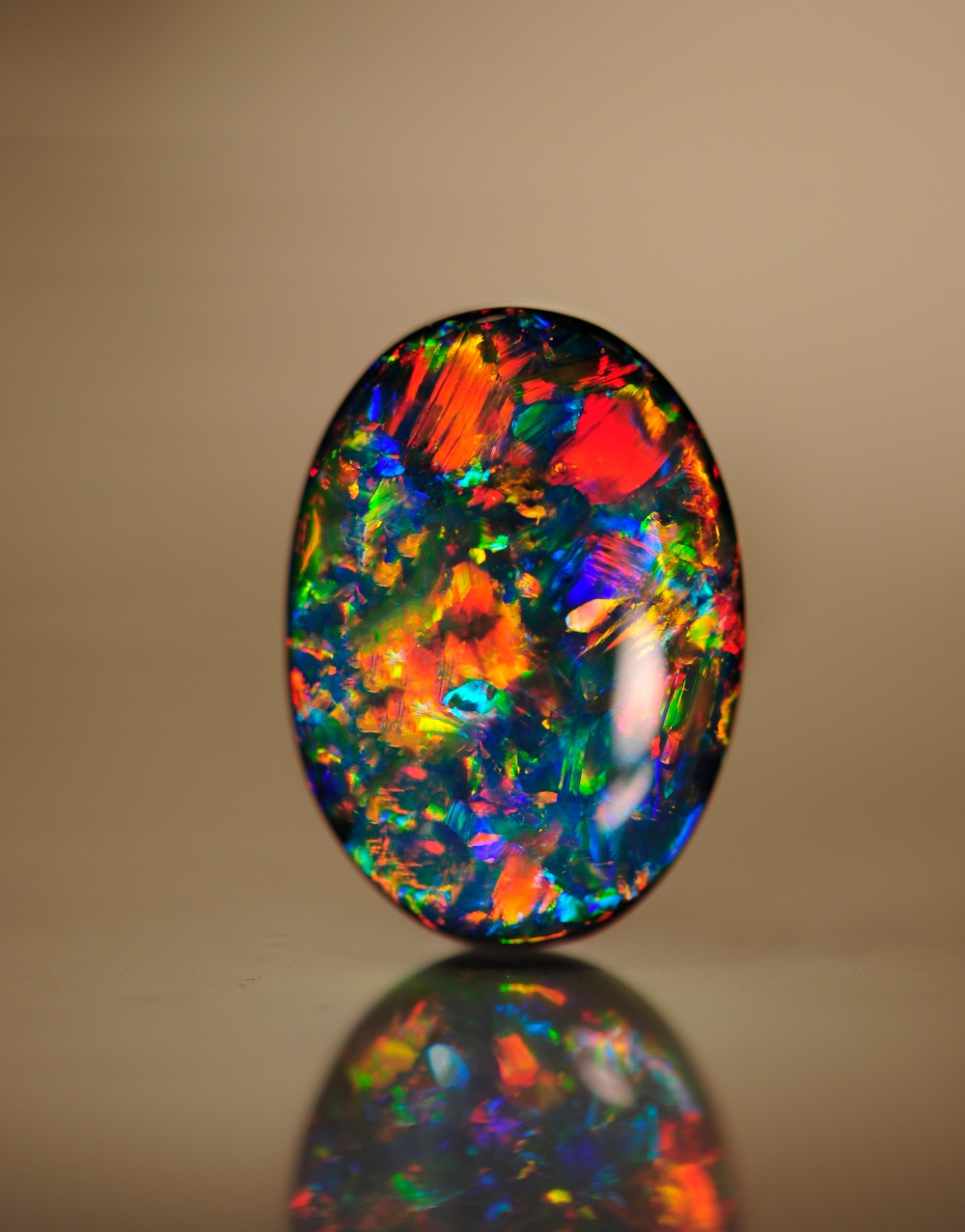 The colours visible in the play-of-colour depends on the sizes of the spheres/gaps. Some precious opals produce a full range of spectral colours. Areas made of smaller spheres (about 150nm), show violet to green or violet to blue flashes. When the spheres are bigger (about 350nm) red or orange patches of colour are produced. Depending on which angle the light hits the opal, it is diffracted differently due to the complexity of the structure, creating this fleeting, almost mystical, effect.

The ‘play of colour’ shows off much better on a dark background. As a result, black precious opals are deemed more beautiful and are more sought after.

Why are opals black?

Black opal owes its dark coloration to fine particles in its composition. The nature of these trace elements can vary. Carbon and iron sulfides (pyrite and chalcopyrite) formed microbially during the solidification process are mainly considered as being responsible for the dark colour. The body colour of these opals is dark, ranging from pure black to dark grey or chocolate brown, depending on the environment in which they formed. 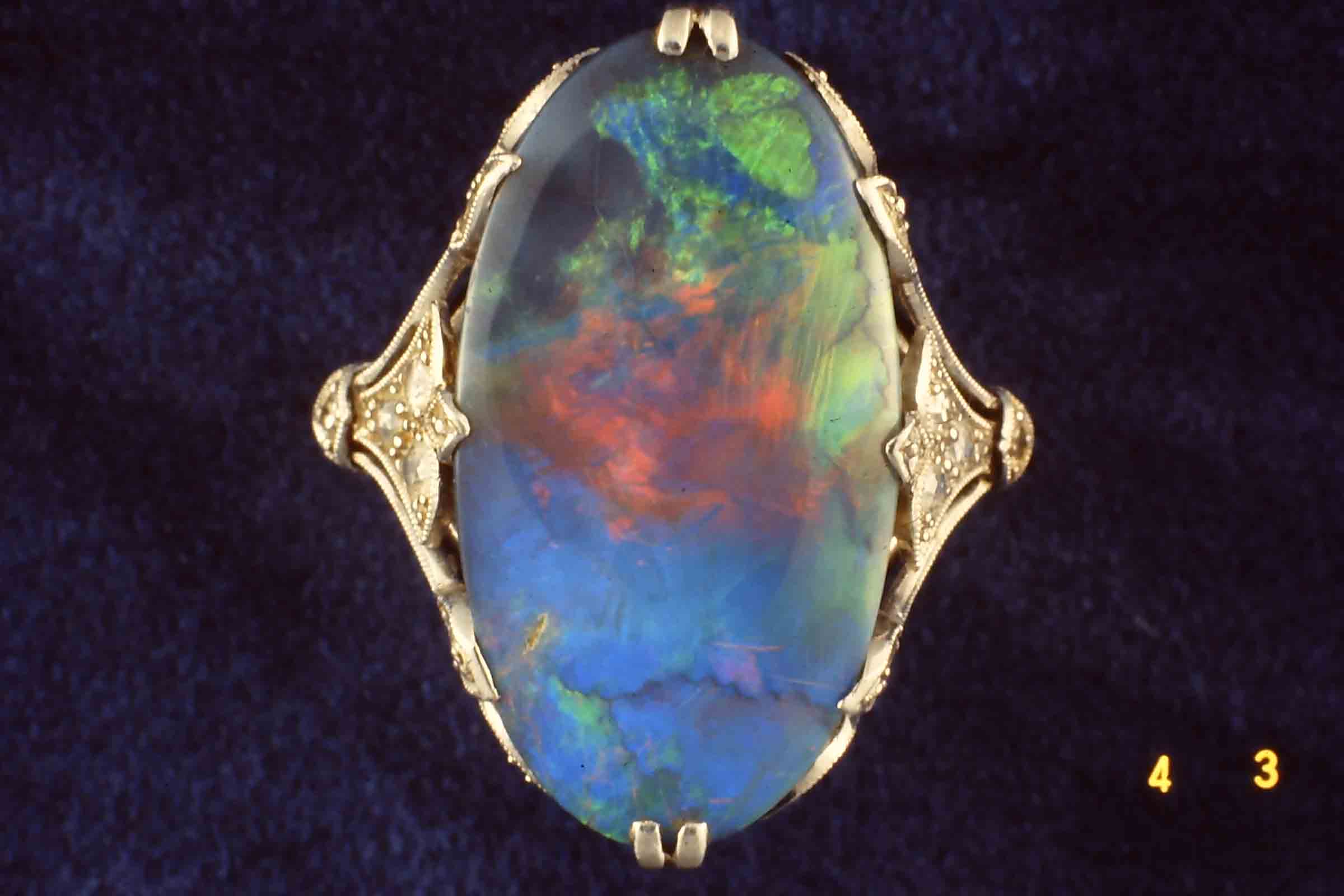 Where are precious black opals found?

Precious black opals are scarce. There are only few localities where black opals are found. The main one today is around Lightning Ridge in New South Wales, Australia where the first black opal is thought to have been found in 1877. Mintabie is known for a more greyish-black material. Most of the black opals on the market come from Australia.

Ethiopian opals are a more recent find. The most important discovery was made in 2008 near the town of Wegel Tena in the Wollo region. Known as the ‘welo opals’, some show a dark brown body colour with a vivid play-of-colour. These Ethiopian opals tend to have a higher water content in their composition and are therefore not always suitable for use in jewellery. Some are hydrophane (absorbent). Since 2013, further North in the Wollo region, at the Stayish mine, grey to deep black precious opals have been uncovered. 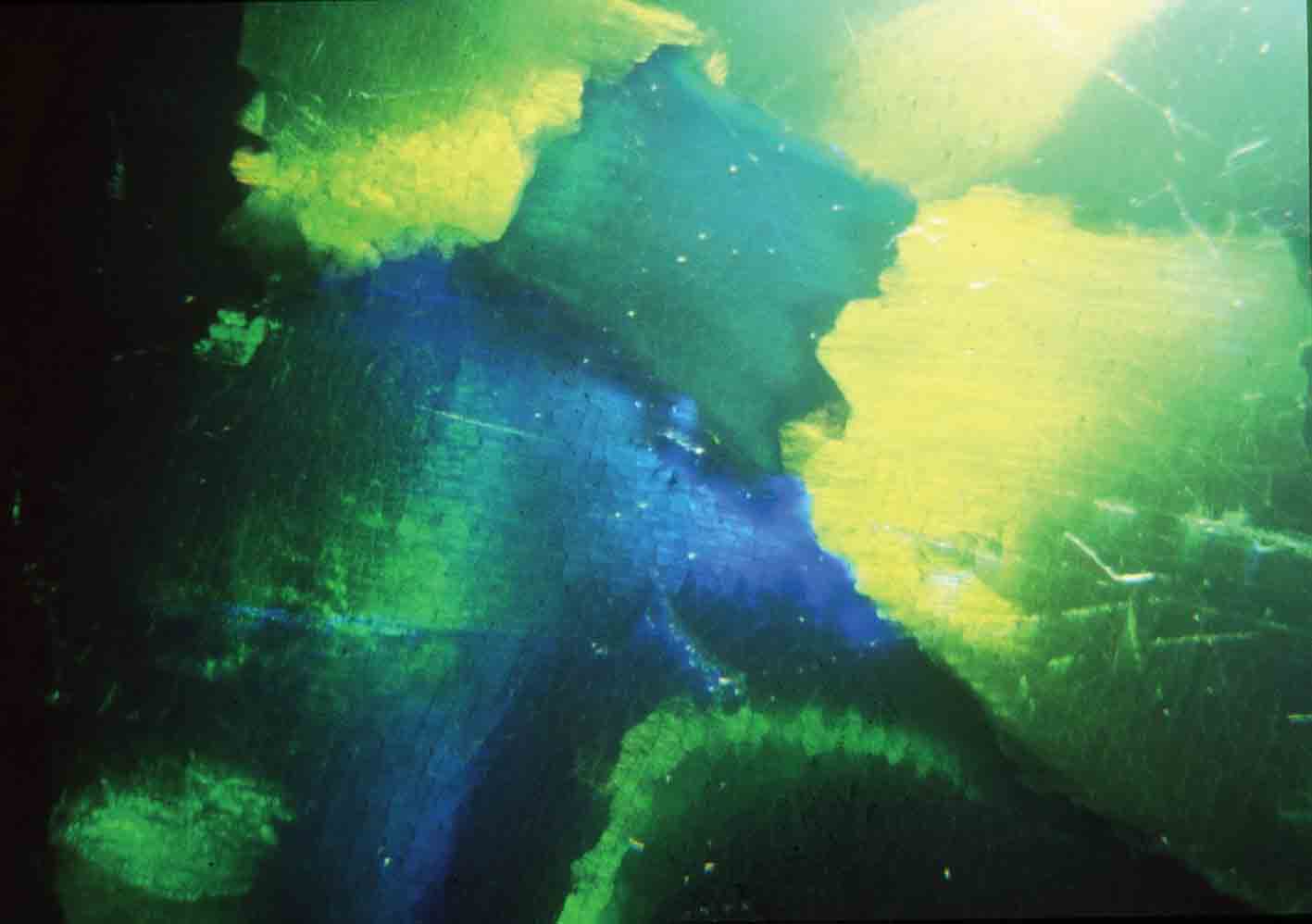 Closer look at the play of colour in a black opal from the Gem-A Archives.

Black opals have also been found in the Virgin Valley, in Humboldt County, Nevada. These opals display a very strong play of light red, blue, violet and green. The Roebling opal, 2585 ct of rough black precious opal, was found in 1917 in Virgin Valley. It displays a particularly vivid green and blue play-of-colour. It is part of the Smithsonian Museum’s collections.

Probably the most famous black opal in history, and the first to have been given a name, is the ‘Burning of Troy’. It owes its name to the blazing red flashes burning in the black gem. It was gifted by Emperor Napoleon to his wife Joséphine, his beloved ‘Helen’. Now lost, it was regarded as the most beautiful and most valuable black opal, weighing 700 carats. It is believed it was mined in Honduras.

Considered the world most valuable black opal, the ‘Aurora Australis’ was found in Lightning Ridge. Found in 1938, it was polished into an oval shape and weighs 180cts. It displays a vibrant play-of-colour with a dominant of red, green and blue against a black background. Dug from an old sea-bed, it has a distinctive impression of a star fish on its back. It was valued at AUD$1 M in 2005. 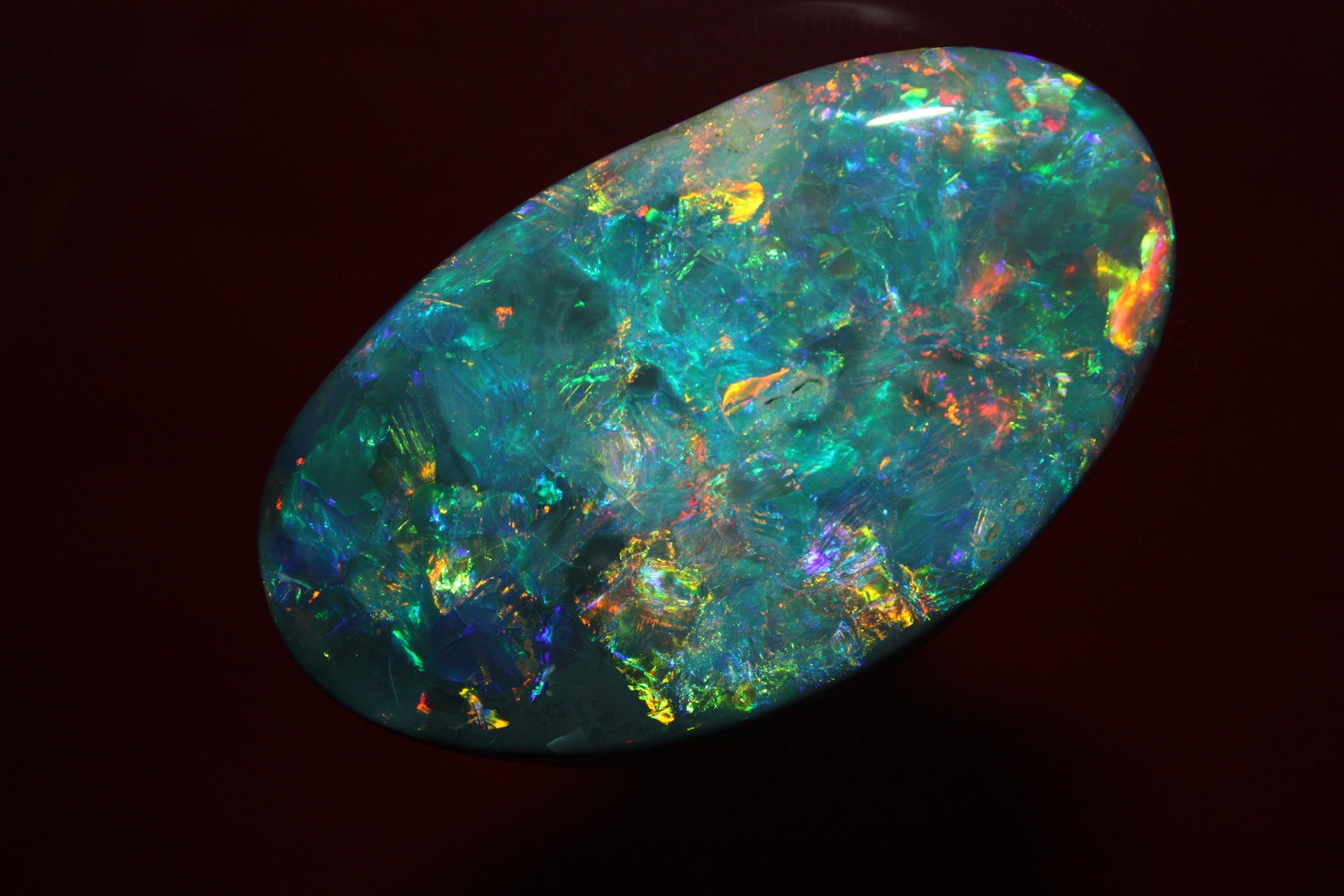 Other famous black opals from Australia also bear poetic names and include the Black Prince, the Butterfly stone, the Fire Queen and the Pride of Australia. The largest uncut black opal was found in 1986 and named the Halley’s Comet (1,982 ct). Of all opals, black opals always commend the highest prices. As they are so desirable, paler precious opals can also be treated to appear black; composites can also be made as well as imitations.

Opals can be soaked in a sugar solution for a few days then in sulfuric acid. The acid turns the sugar into carbon, leaving minute particles of black carbon in the opal. This is effective at darkening the body colour of the opal. The treatment can be detected by observing these black speckles with the 10x loupe and microscope. The dark specks of carbon are limited to a thin layer at the surface and a pale matrix can be spotted in between. The play-of-colour also appears to be very close to the surface. Transmitting light through the opal, as well as immersion in water, can also help spotting the added black particles. 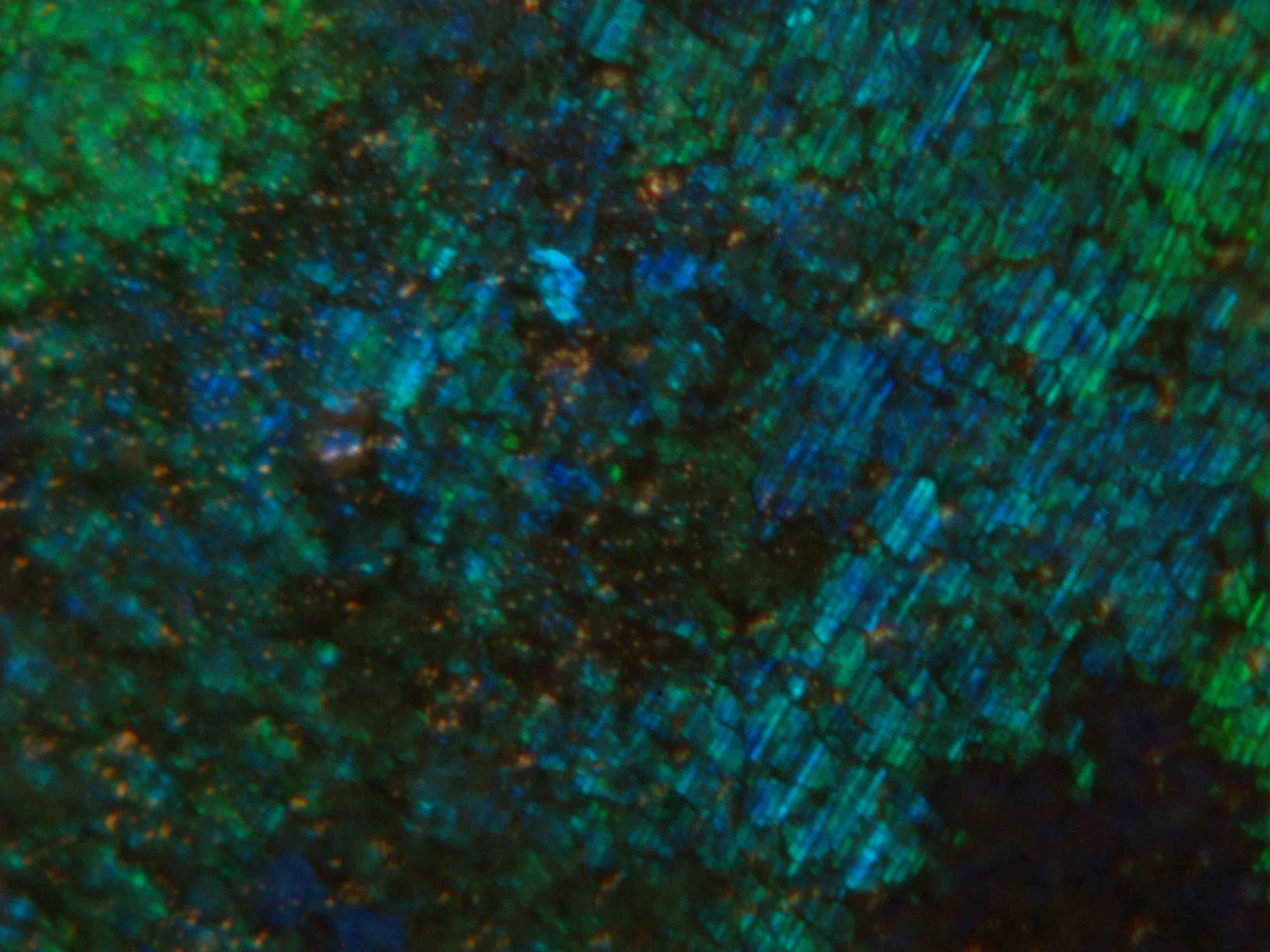 Pale coloured precious opals have also been smoked. Ethiopian smoked black opals are quite common on the market. Fine smoke particles are forced into the pores of a pale opal. This is usually done by wrapping the opal in paper and heating the paper to the point of smouldering. The combustion releases microscopic particles of soot that enter the porous material. The source of the dark coloration in the opal can be checked with transmitted light or in immersion. Black speckles can be visible with the loupe or microscope . Dark colour tends to concentrate in crazed areas (surface reaching fractures).

Black opals can also be created by making composite precious opals, namely opal doublets or triplets. Opals occur in thin seams in a matrix rock and some are too thin or fragile to be shaped and used in jewellery. They are then used to make composite materials. 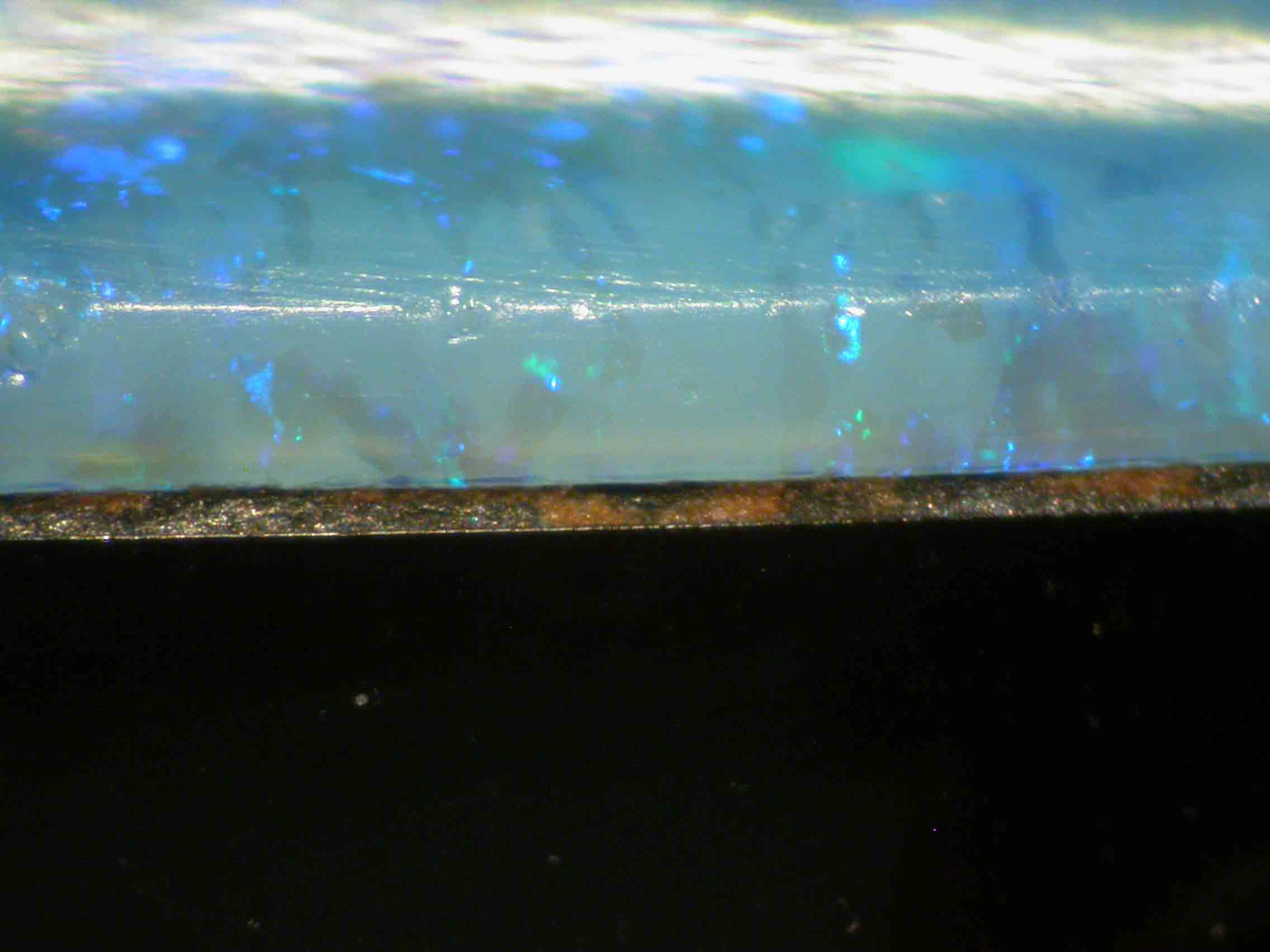 These composite materials require only a thin slice of precious opal – slightly thicker for doublets (just over 2mm), wafer thin for triplets (0.5mm).

To produce a doublet, the slice is glued to a black base material, then shaped and polished to a low cabochon. The black material varies; it can be black plastic, paste, black chalcedony, ironstone or black potch opal, which is more deceptive. This black backing shows through the thin whitish slice of precious opal and effectively makes it appear darker, enhancing the play-of-colour.

Triplets are made of thin slivers of precious opal, sandwiched between a black backing and a domed colourless material, usually made of glass or quartz. These layers are glued together with epoxy resin.

Do black opal synthetics exist in the market?

Many attempts have been made to produce or simulate opals. Pierre Gilson started to manufacture ‘synthetic’ opals in 1974 using the gel growth technique. It is quite convincing for white opal, less so for black. Hence the Gilson black opals are slightly less pricey than the white ones. 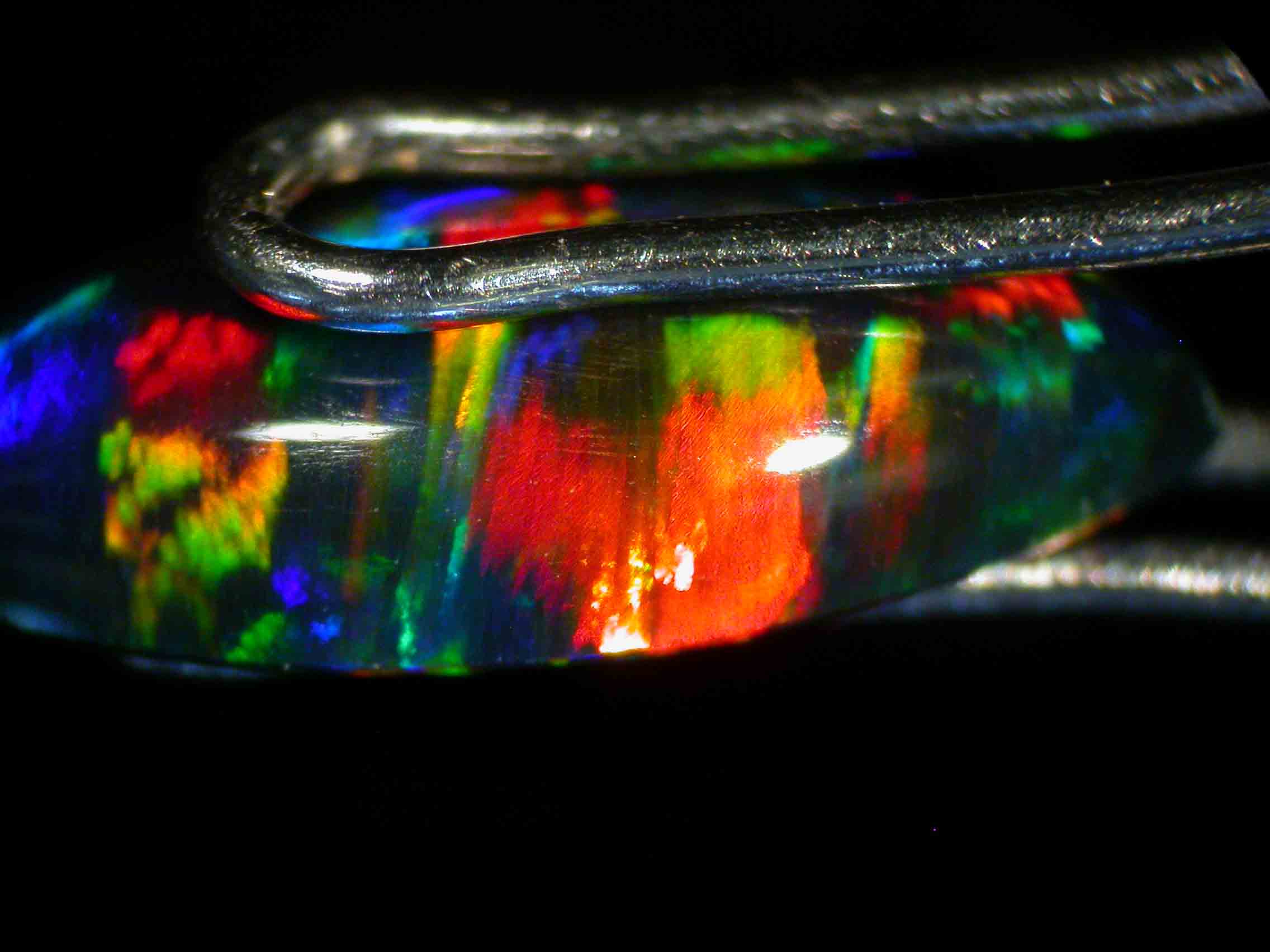 Synthetic opal with a columnar structure photographed by Pat Daly at Gem-A.

Gilson opals can be detected by observation. The patches of colour seem to display a ‘lizard skin’ effect; they look pixelated. When observed from the side, the columnar structure is also very distinctive. Also, unlike natural opals, ‘synthetic’ opals do not fluoresce. Other types of ‘synthetics’ are also available. None can be fully termed synthetic as they have different physical, chemical and optical properties than their natural counterpart.

Various simulants are also manufactured to imitate black opals, such as plastic or glass simulants. The Slocum stone, created and commercialised in the 1970s by John Slocum, is made of black glass with coloured metallic foils in lieu of play-of-colour. Bubbles and swirls typical of glass are another tell-tale. 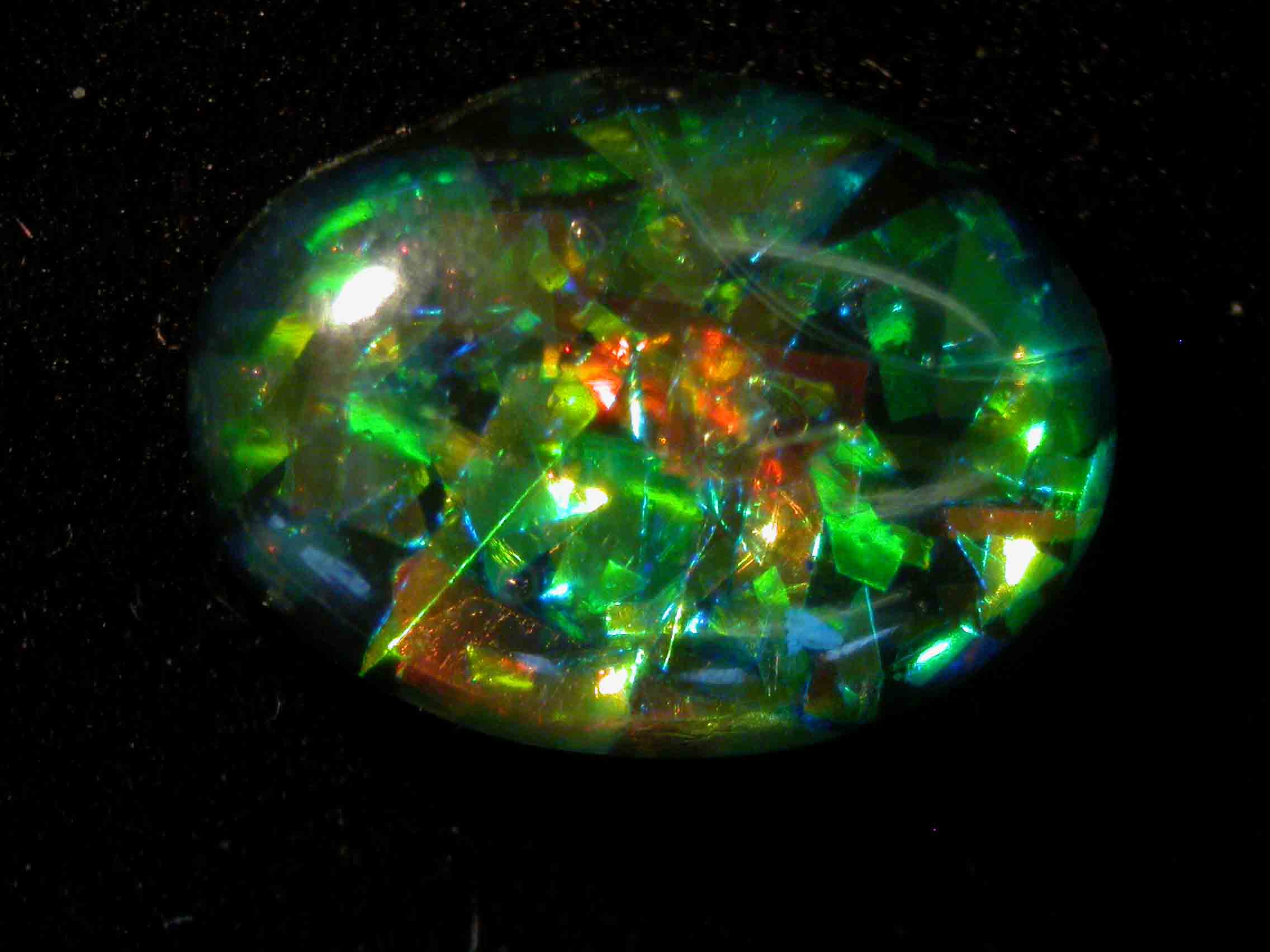 Black opal simulant with resin and foil photographed by Pat Daly at Gem-A.

How to care for opals

Opals are rather soft materials at about 6 on the Mohs’ scale and are therefore better suited for earrings, pendants or brooches rather than rings to prevent scratching and abrasion. Because they have water in their composition, they are also sensitive to variations in humidity and temperature. Sudden changes can cause irreversible crazing. They should not be displayed in direct sunshine. When storing them for a long time, it is advised to place a slightly moist cotton next to them to keep the relatively humidity constant. Doublets and triplets should never be soaked.

Most opals are to some degrees porous, and some, notably hydrophane opals, are absorbent. These should therefore be cleaned only with a soft dry or damp cloth. No chemicals should be used. For that reason, one should avoid testing opals on the refractometer as the RI fluid might stain them.

More in this category: « Understanding Zircon: A Misunderstood Gemstone with Amazing Properties Top 5 Most Recognisable Gemstone Inclusions for Gemmologists »
Tweet
Become a Gem-A Member
Apply to become a Gem-A Member
Subscribe to our Newsletter
Keep updated with Gem-A
Sign Up
Get in Touch
Can't find what you're looking for?
Contact Us