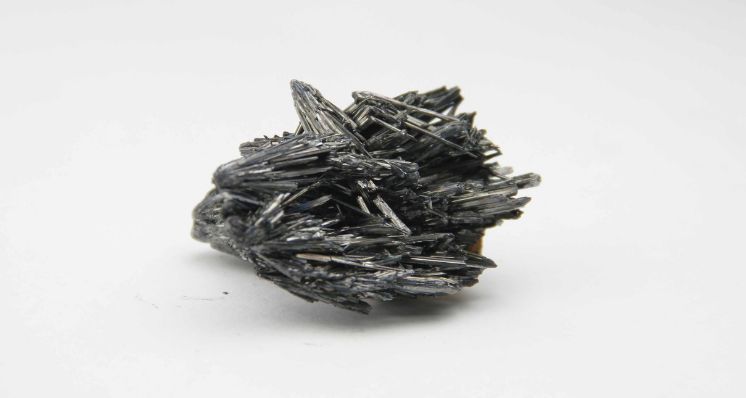 Gem-A assistant gemmology tutor, Dr Juliette Hibou FGA explores the history, origins and chemical composition of the mineral, stibnite, which can be found in the Gem-A Gemstone & Mineral Collection.

Stibnite is an antimony trisulphide mineral with the chemical formula Sb2S3. It is a natural mineral source of the chemical element antimony (Sb), which is a lustrous grey metalloid, and it is mined primarily for this reason.

Dioscorides, the Roman naturalist and the father of pharmacy, refers to stibnite as πλατυόφθαλμον (platyophtalmon) meaning ‘that enlarges the eye’ or στίμμις (stimmis) which refers to antimony black.

Powdered stibnite was indeed used as an eyeshadow or kohl by ancient civilizations as early as 3,100BC. It was applied on the eye lashes, eyebrows, eyelids and around the eyes to enlarge the eye and make the white look brighter. Also known for its medical properties, it is described by Pliny the Elder in his treatise Natural History as a treatment for eye infections.

The Greek word stimmis became ‘stibium’ in Latin. The addition of the letter ‘b’ is why antimony has the chemical symbol Sb on the periodic table.

In 1832, the French mineralogist François Sulpice Beudant named the mineral stibnite. He also coined the name for anglesite, bismuthinite (Bi2Si3, which forms an isomorphous series with stibnite) and cerussite, while the mineral beudanite was named after him.

Stibnite forms as orthorhombic crystals that can be heavily striated along the prism’s length. Well-formed crystals are usually found in intricate clusters of radiating crystals or nest-like formations. Stibnite can also occur as a massive form, with no overall crystal shape.

It is lead-grey with a blue tint and can show some iridescence. Opaque, it has a metallic lustre, i.e. reflects light perfectly like a mirror. With a hardness of only 2 on the Mohs scale and one perfect cleavage direction, it is extremely soft and brittle. As a result, stibnite is rarely fashioned or used in jewellery.

The most spectacular stibnite specimen known today is displayed at the American Museum of Natural History. Recovered from a mine in China, it weighs half a ton, the specific gravity of stibnite being 4.63. Because of the fragility of the mineral, stibnite crystals are rarely found complete, which makes this large stibnite specimen in New York unique.

Dark, slender, needle-like prismatic stibnite crystals are also prized as inclusions in rock crystal quartz and calcite. Stibnite usually forms in hydrothermal deposits. The largest known deposits are in China (Xikuangshan mine), as well as in Russia, USA, Japan, France and Germany.

Discover more gem materials and minerals in our ‘Understanding’ series, including dioptase, selenite and sugilite.

Cover image: A cluster of stibnite crystals on matrix that forms part of the Gem-A Gemstone & Mineral Collection. Photograph by Henry Mesa. This article was originally posted on 13-06-2019.

More in this category: « Understanding Sugilite Buying Guide: Saltwater versus Freshwater Pearls »
Tweet
Become a Gem-A Member
Apply to become a Gem-A Member
Subscribe to our Newsletter
Keep updated with Gem-A
Sign Up
Get in Touch
Can't find what you're looking for?
Contact Us