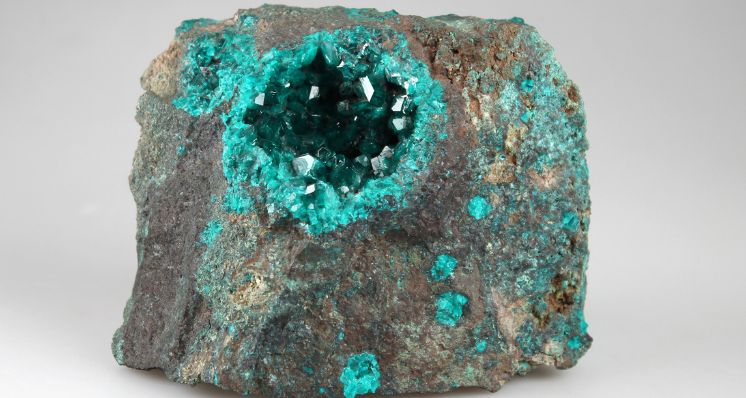 Gem-A is proud to own a fantastic collection of gemmological specimens that have been gathered, gifted and bequeathed throughout our history. Now, we are opening the vault doors to reveal some of the most unusual, colourful and unique items in the Gem-A Gemstone & Mineral Collection, starting with this dioptase.

Dioptase was first documented and named by René Just Haüy (1743-1822), a French mineralogist and founding father of crystallography. His law of rational proportions for crystal angles and his classification of crystals into six systems in his Treatise on Crystallography (1822), were the launch pad for many further discoveries in crystallography.

He is also responsible for the names of many minerals, including actinote, amphibole, axinite, sphene, disthene (kyanite) amongst many others.

In 1797, he chose 'dioptase', from the ancient Greek dia (through) and optasia (vision) in reference to the fact that he could see secondary facets through the crystals he studied when tilting them in the light.

When was Dioptase Discovered?

Discovered at the end of the 18th century in Kazakhstan in the central Asian steppes, dioptase was first confused for emerald by mineralogists in Russia. It was categorised first by J.C. De Lamétherie in 1793 as a ‘primitive version of emerald’.

It also went by the names of achrite, emeraudine, copper emerald or kirghisite. Haüy recognised the lower hardness of dioptase (5 on Mohs’ scale of hardness) compared to emerald, its higher specific gravity (3.28 to 3.35) as well as the fact that its green colour was due to copper. As a result, he categorised it as a new mineral.

How does Dioptase Form?

Dioptase forms as a secondary mineral in copper deposits and is created by the weathering and oxidation of primary minerals in limestone or calcite formations. It is often associated with other secondary copper minerals such as malachite, chrysocolla and azurite.

The formation of dioptase requires warm and dry conditions, hence it is mined in arid places. It is found in good quality crystals in few localities, most notably Kazakhstan (Altyn-Tube deposit) in the central Asian steppes. It is also found in Africa (Republic of Congo, South Africa and Namibia), in the USA (Nevada, Arizona, New Mexico), Chile and Peru. 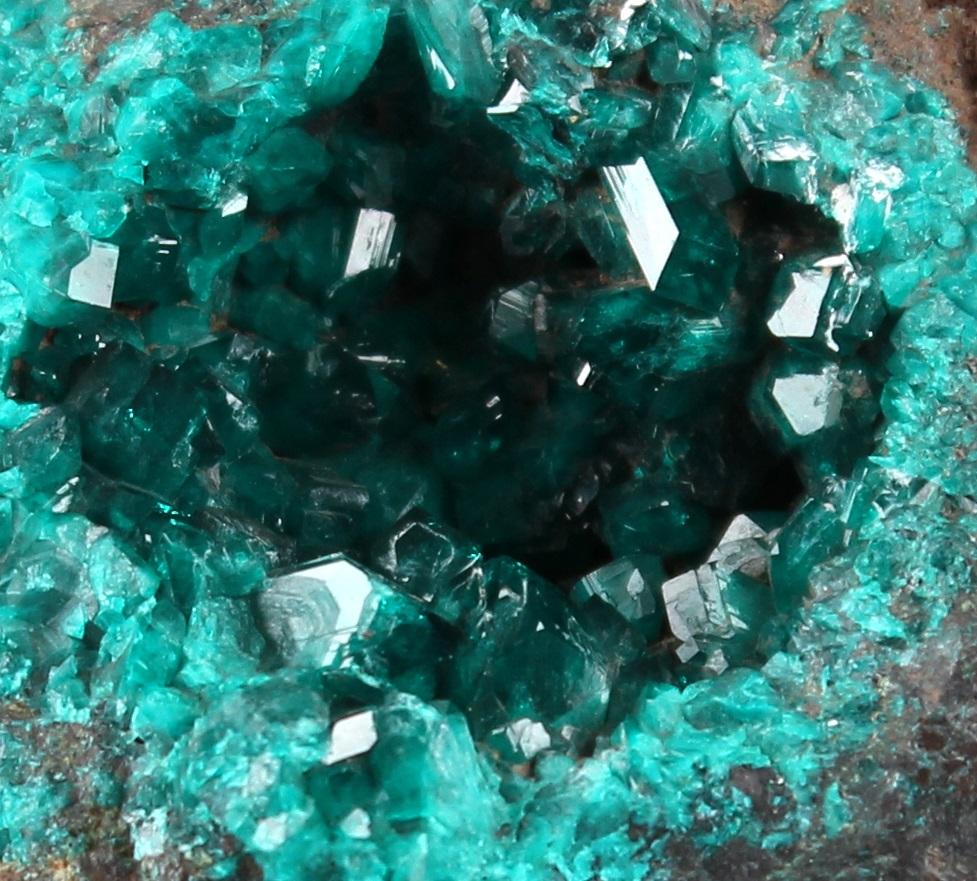 Historically, dioptase was confused for emerald thanks to its bright green colour.

Dioptase is a hydrous copper silicate CuSiO2(OH)2 of an intense blue-green, one that closely approaches the colour of emerald. It could also be confused for uvarovite garnet.

What are the Properties of Dioptase?

Transparent to translucent, it displays a bright vitreous lustre, reflecting light with a higher intensity than glass. It crystallises in the trigonal system. It forms in usually small prismatic rhombohedral crystals (three-dimensional shapes like a cube, except the faces are not squares but rhombi), hexagonal in section, with a rhombohedral pyramid termination. Large crystals are rare. Clusters of small crystals are more commonly found.

Dioptase is a brittle stone with perfect cleavage in three directions, meaning it can easily break in three specific orientations that are weakness planes in its atomic structure. Incipient cleavages – internal breakages in these three specific directions - are often visible in crystals and faceted stones. Their flat surface reflects light and can cause interference colours to be seen inside the gem.

This brittle and soft nature means dioptase is hard to facet and rarely set in jewellery. It is nevertheless a rare and sought after collectors’ stone.

The Uses of Dioptase

Due to the intensity of its colour, dioptase is also used as a pigment in painting. The use of dioptase as a green pigment can be traced back to Neolithic times, including the famous group of ceramic figures of 'Ain Ghazal dating from the 9th century BC, in today’s Jordan. Three of these thirty-two ritual statues, half-size human figures modelled in white plaster, had their eyes formed with a cowrie shell, a bitumen pupil, highlighted with a vivid green dioptase pigment.

Dioptase also shows some interesting optical properties. With a refractive index of 1.644-1.709, it has a high birefringence of 0.051 to 0.053: when entering the gem, light is split into two components that refract inside the gem in two slightly different directions and at different speeds. The difference between these two rays, which can be measured with the help of a refractometer, is known as birefringence. When the birefringence is high, it can be detected by a trained eye when looking through the table facet with a loupe.

The effect can also be seen in peridot and zircon and can help towards the identification of a gemstone.

When using a spectroscope, the spectrum of dioptase shows strong absorption of violet and blue light and a weaker absorption band in the orange to red. Light blue to green is fully transmitted, which is why our eyes perceive dioptase as an intense blue-green colour.

Interestingly, dioptase is also known to be pyroelectric: it can become electrically polarised and generate a temporary voltage.

More in this category: « Understanding the Value of Sapphires Questions to Ask When Buying a Piece of Gemstone Jewellery »
Tweet
Become a Gem-A Member
Apply to become a Gem-A Member
Subscribe to our Newsletter
Keep updated with Gem-A
Sign Up
Get in Touch
Can't find what you're looking for?
Contact Us