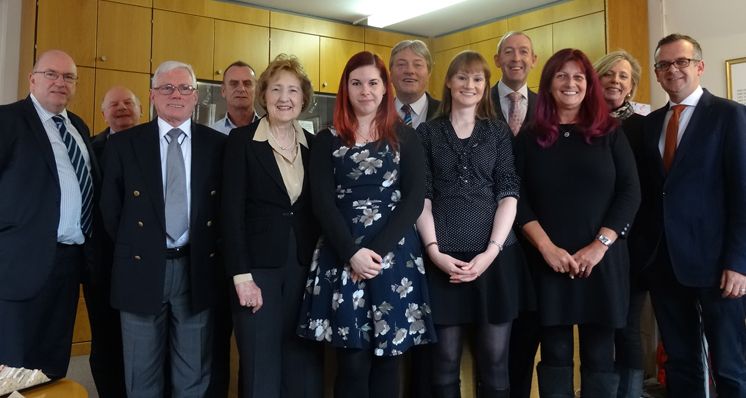 Rosamond Clayton FGA DGA FIRV MAE, a gemstone specialist and jewellery valuer, is often called upon as an expert witness in trials to identify and value precious stones.

When did you get started in gemmology?

I had been working in Hong Kong on a contract posting when I married in the 1970s and I needed to find a new and interesting career. Fortunately, my search for a fulfilling subject to study coincided with the arrival of Marcia Lanyon FGA in Hong Kong, whom I met at a friend’s house one evening.

I was soon enrolled on a foundation gemmology course and quickly became a fanatic. Many in our trade will recognise this ‘disease’. When I visited China in 1973 for a business trip with my husband, we were each only allowed 15 pounds of luggage, including handbag and camera; Webster’s Gems formed part of this allowance!

I took my foundation exams in Hong Kong in 1974 and passed, but it was diamonds that interested me and therefore I needed to study for the Diamond Diploma. I was helped by Noel Deeks FGA DGA who taught the practical diamond grading at Sir John Cass College in London, but there was nowhere to study in Hong Kong, so I partly commuted to London (subject to load on British Airways). Noel Deeks introduced me to a Mr Shun Wai Woo FGA DGA, the only DGA in Hong Kong at the time, who worked in a senior capacity with his cousin, who had started the only diamond manufacturing company there.

In addition, through a friend, I was introduced to Bill and Joan Hsu who had studied the residential GIA diamond course in Santa Monica and returned to Hong Kong to run a diamond wholesale business. I went to their office at least once a week and graded all their stock; they taught me how to survive in business in Hong Kong.

How did you transition to the world of valuations?

When Marcia Lanyon left Hong Kong she passed her consultancy work with the Hong Kong tourist association on to me, so by this time I knew most of the retailers. My boss at the time, a shrewd Chinese business woman, saw an opportunity to open up new accounts with these retailers. After three years I moved to a retailer in Kowloon on the mainland, called Tse Lee Yuen.

One Monday I was instructed by my employer that I would become the valuer! I was to value all the customers’ diamonds and jadeite. My protests fell on ‘dead ears’ as I was told my English was better than my Chinese colleagues’ and the valuations had to be written in English – there were no typewriters with Chinese characters – therefore there was no argument.

How did your own business evolve?

In 1985 I set up my own valuation business in Hong Kong, which I sold when I returned to the UK in 1987. Initially, on return to the UK, I rented space with jewellery designer John Donald at 120 Cheapside who I knew through Marcia Lanyon. It was a matter of going back to the start on the Monopoly board, only saved by the fact that the NAG and Gem-A were housed together in Carey Lane (in close proximity to Cheapside), and I was soon taken under the wing of Philip Stocker FGA the NAG in-house valuer. He introduced me to the Academy of Experts, who provide training for those taking instruction as expert witnesses.

Have there been any memorable moments that really stand out?

I have always enjoyed travelling abroad for work and my most memorable business trip was for a Chinese friend, who was chairman of a marine diamond mining company in Namaqualand, looking at the possibility of cutting diamonds mined there in Hong Kong or New York, where he lived.

My cousin was working as a commercial pilot in South West Africa (now Namibia), so I flew to Windhoek with a commercial airline and she flew me from Windhoek to the mine in a Beechcraft Bonanza. We stayed the night at Okiep near Springbok, about 500 miles from Windhoek and the next day to De Punt, North of the Oliphants River.

In earlier times this river was much larger and brought the diamonds down, it is thought from Lesotho, exiting into the Atlantic and carrying the diamonds north with the current, in the same process as the Orange River at a later stage. Due to the rough sea conditions, the members of the mining franchises were only able to dive on average four times a year and I was fortunate to be there on one of these occasions. Apart from a substantial yield of fine quality diamonds they brought up crayfish for our evening barbecues.

Can you tell us a little bit more about your profession and what makes it unique?

I had been instructed as an expert in jewellery cases in Hong Kong and this work in the field of gemstones and jewellery had always held the greatest interest for me. Importantly, it is necessary to train to supply reports as an expert witness in court proceedings and it is now becoming a requirement by the courts, not merely a wise precaution. The cases are varied but the civil cases frequently involve post loss assessment, divorce or some aspect of alleged unethical trading.

A case set down for a High Court hearing can last a number of years from the preliminary report to additional reports in light of new evidence, experts meetings and finally the hearing which can frequently last a week or a number of weeks. A great deal of research is required, sometimes many months just for one item. No other type of valuation work provides this opportunity.

What would your advice be for anyone who wants to get into what you do?

For aspiring valuers today it takes time to obtain the required qualifications and experience and the process may seem costly. However, it would be hard to find another field of interest with so many enthusiastic and generous people willing to give their time and knowledge. As a valuer, even once the initial qualifications are obtained, without the wealth of knowledge available and help from those in specialist fields, it would not be possible to operate. In addition there is not a moment to lose in grasping every opportunity for further knowledge and training in every aspect of our rich world.

My own career in the field of gemstones and jewellery has been a long and challenging path and, at the outset, I had not entertained the idea of being a valuer but I believe that there has been a revolution in the methodology of jewellery valuing in the UK and I am proud to be a part of it.

Try to obtain experience with a diamond wholesaler, coloured stone wholesaler or manufacturer.

It is impossible to operate even as an experienced valuer without contacts. Visit auction houses, museums, attend lectures and most importantly attend The NAJ Loughborough Conference where workshops and lectures are provided on every imaginable valuation topic. ■

Tagged under
More in this category: What Career Paths Can Trained Gemmologists Take? »
Tweet