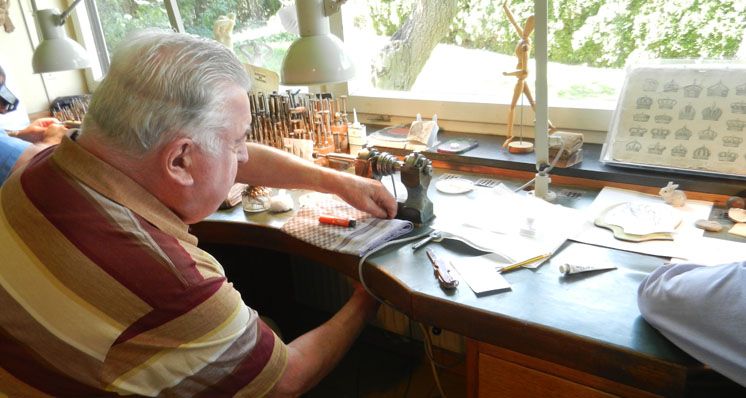 Once upon a time, in a land far, far away, there was...How often have we all heard these words? This is the most common beginning to a story that fires the imagination, transporting one into a magical world full of marvels and wonders, starting in our childhood and possibly continuing into adulthood. But, what has this to do with gemmology and gemstones?

Three different female head cameos in agate, where the frame is worked differently and the colours of the agate are used for different purposes. Image credit Erwin Pauly.

Well, let me tell you my story starting in Idar-Oberstein, a little town in Germany, where gem carvers continue to tell stories through stones, carrying on an old tradition that started in ancient times. Any good story has interesting characters, here are mine...

In his little workshop in Veitsrodt (Idar-Oberstein), surrounded by nature, Erwin Pauly creates objects of beauty and is in very high demand by VIP's worldwide. He learned the art of gemstones carving from masters of the time and has now become a master carver in his own right. Erwin Pauly is generous in giving his insight and helping aspiring artists who want to learn from him, he trained his three sons who have now acquired their own worldwide fame, one of them in Hand-Ulrich Pauly whose works can be admired in Tucson.

Example cameos preformed from gemstones. Far left is a citrine preform by Bernd Munsteiner, worked as a cameo by Erwin. Note the use of Munsteiner's lines and circles in Erwin's creation. He uses the line as a divider between face and hair, working it to then develop in a wheat sheaf. The circles are then part of the hairstyle. Image credits Erwin Pauly.

Mr Pauly started out with traditional agate carvings, consisting of an oval cameo on layered agate with classical motifs, or head portraits either shown in profile or front view. These portraits are also of living people, and can now be admired in his studio or in the museums of Idar-Oberstein.

Erwin Pauly thinks of himself as an artist who speaks through gems. He wanted to break away from the classical oval carvings to tell his own stories, so he started introducing other cameo shapes. In some of these carvings the face or the hair breaks out of the confinement of the frame bringing a new contemporary quality to the piece and adding another essential part to the story. He also started using other gemstones for his creations, opal, ametrine, citrine, beryl, rock crystal, and collaborates with Bernd Munsteiner for some of his pieces.

Munsteiner has become a very well-known name in the trade. At shows everyone rushes to visit the Munsteiner booth and admire the latest creations this workshop produces. Munsteiner's introduced something new to the trade; inspired by nature, they challenged conformity and tradition, embracing the inherent inclusions and irregularities in gemstones, which unleashed a wave of creativity in many new artists. Their understanding and feeling for gemstones seems to continue exactly where nature left off.

Individual jewellery pieces by Munsteiner. In the centre are a pair of earrings in platinum by Jutta with Munsteiner stones, tourmaline 21.62 ct, tourmalinated quartz, rubellite tourmaline 0.93 ct. Image credits Munsteiner.

Munsteiner is made up of Bernd Munsteiner, his son Tom, and Tom's wife Jutta who is a very talented jeweller and channels the mood set by the lapidary artist into individual jewellery pieces. The final designs that emerge from Munsteiner's gemstone sculptures remind one a little of the Bauhaus movement and minimalism due to the simply, unfussy lines in pieces. But there is much more behind these pieces than what meets the eye. 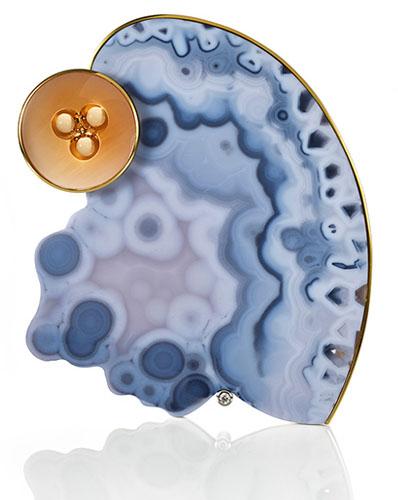 Munsteiner uses the optic laws of refraction and reflection to produce interesting three-dimensional effects in pieces; highlighting that the essence of a crystal can be sft and organic, not just angular and hard. Munsteiner believes that nothing is more powerful than an idea, and sometimes this idea has to wait until the right gemstone, with the right set of inclusion in the right arrangement, comes along. Only then will it be able to tell us a story. 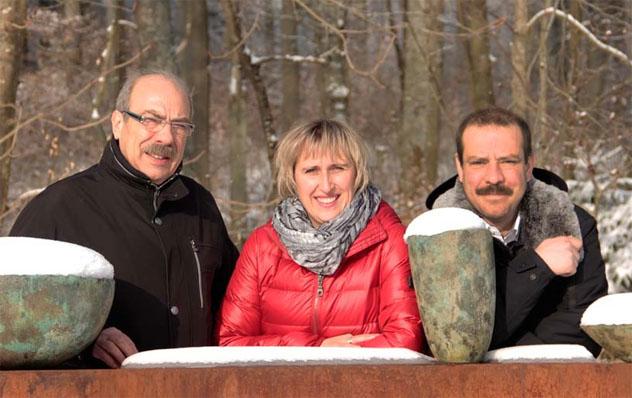 Nothing really prepares you for the surprise you feel when presented with this company's miniature creations, including leaves, flowers, blossoms, fish and mammals all carved out of various gemstones. The attention to detail is stunning, the cuteness of some almost unbearable. All these little creations, some no larger than a one Euro coin, appear to have a life of their own and tell a story, all with a certain sense of humour. 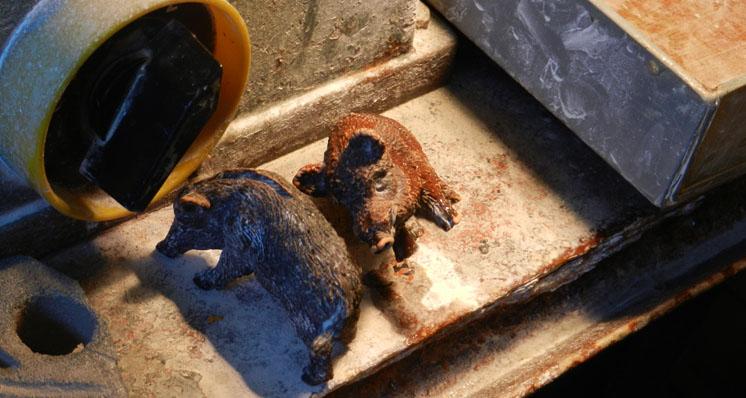 The current artist-carver at Herbert Klein is Stefan Klein, who started as an engraver in his father's company and developed his skills. Stefan's creative process is long, leading to a perfect creation; he carefully studies pictures and films of the nature he intends to represent in his pieces, he establishes a connection with the piece until he declares it finished and only then reveals its fairy tale. 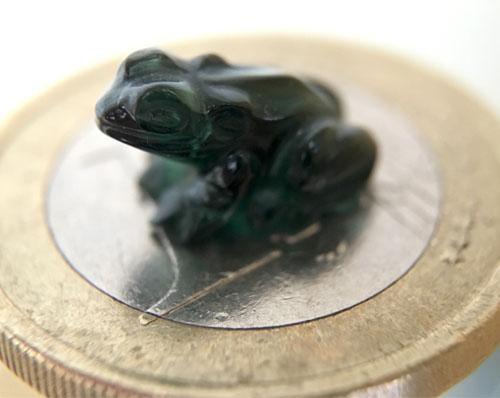 The smallest tourmaline frog, placed on a one Euro coin for scale. Image credit D.Mazza.

None of his pieces are exactly the same. They all have small differences, whether that is the materials used, the inclusions within or the representation chosen. Each aspect contributes to telling a fantastic tale. 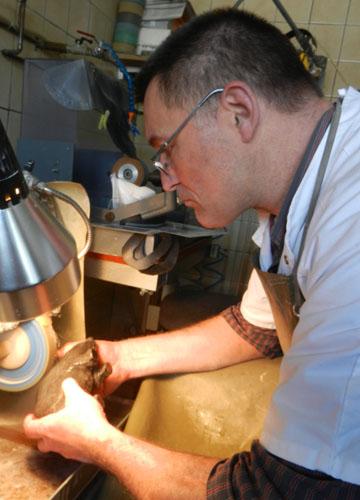 There are many more stories and tales I can tell you about these artists and their creations: Patrick Dreher, for example, creates stunning gemstone animal sculptures that seem to come to life as they give the effect of muscles rippling beneath the skin. Michael Peuster creates stories out of different materials, gemstones and elements put together, while Manfred Wild sees a single, lonely stone in a gem parcel, picks it up and creates a story around what he sees.

But these are all stories for another day.

Tagged under
More in this category: « Discovering Agates on the Shores of Cornwall, England Challenging Perceptions: Meet the Gem Cutters Thriving in Newcastle »
Tweet