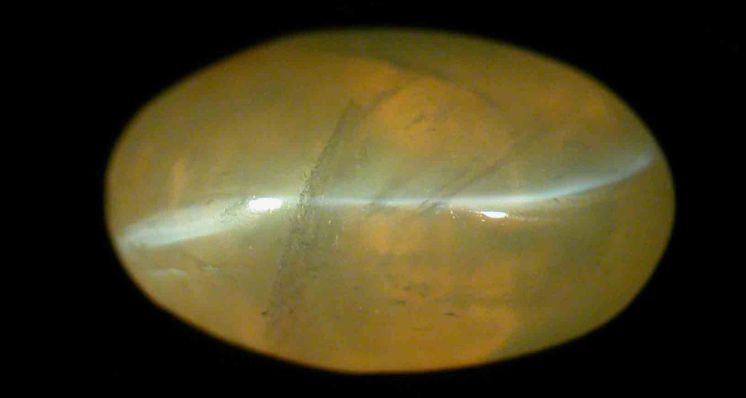 Chatoyancy is the gemmological name given to the curious optical effect in which a band of light is reflected in certain cabochon-cut gemstones, creating an appearance similar to light bouncing off a cat's eye. Gem-A's Collection Curator, Barbara Kolator FGA DGA explains chatoyancy and highlights some of the many gems in which it can occur.

Chatoyancy is the name given to the ‘cat’s eye’ optical phenomenon which can be seen in certain gemstones. The term ‘chatoyancy’, deriving from the French for ‘shining like a cat’s eye’, denotes the effect that occurs when a bright light is shone onto a rounded, reflective surface and causes light to be reflected back in narrow line perpendicular to the observer’s line of sight. This can be seen by looking at a spool of shiny thread or some cabochon-cut gems.

Chatoyancy occurs when a band of light is reflected from a series of thin inclusions which are parallel to each other (these may be hollow tubes or needle-like crystals of, for example, rutile or haematite).

In order to display this effect there must be enough fibres oriented in parallel to the base of the stone. The gemstone also has to be cut as a cabochon to provide the necessary rounded surface for the line of light to be seen.

As the light moves, or the observer’s eye line moves, the line appears to move too, appearing just like the way a cat’s pupil will look under a bright light. 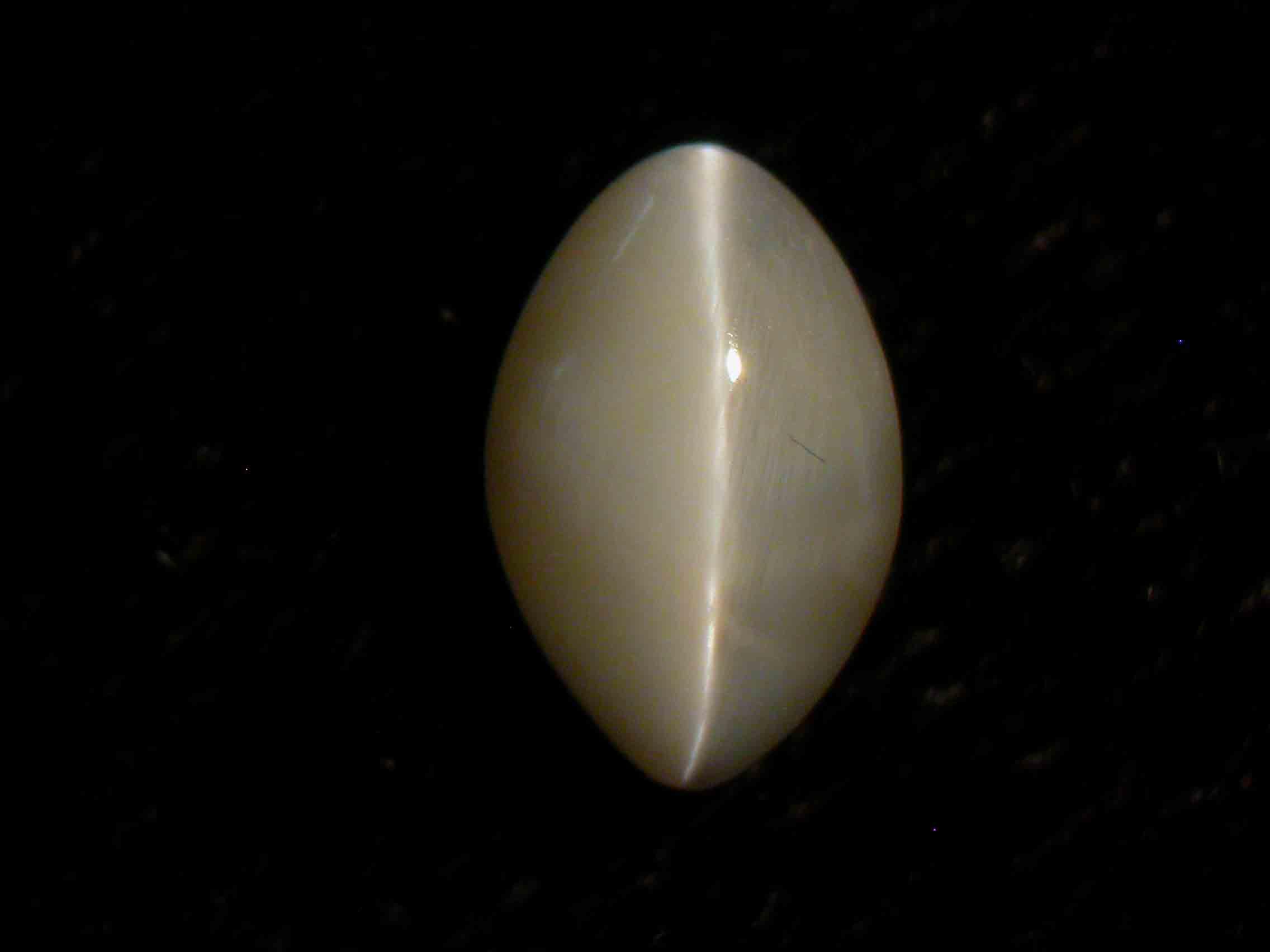 The type of line produced will depend on the types of inclusions; the sharpest, finest line is produced in chrysoberyl, which is the only stone which may actually be called ‘cat’s eye’, without a qualifying species name. Such a stone will possess needle-like inclusions which form an effect known as ‘silk’. As a result, a very definite and sharp chatoyant effect is produced.

Many species can exhibit chatoyancy including tourmaline, apatite, beryl, actinolite, demantoid garnet, scapolite, sillimanite and quartz among others but only chrysoberyl can be called simply ‘cat’s eye’, the others must be prefixed by the species name. 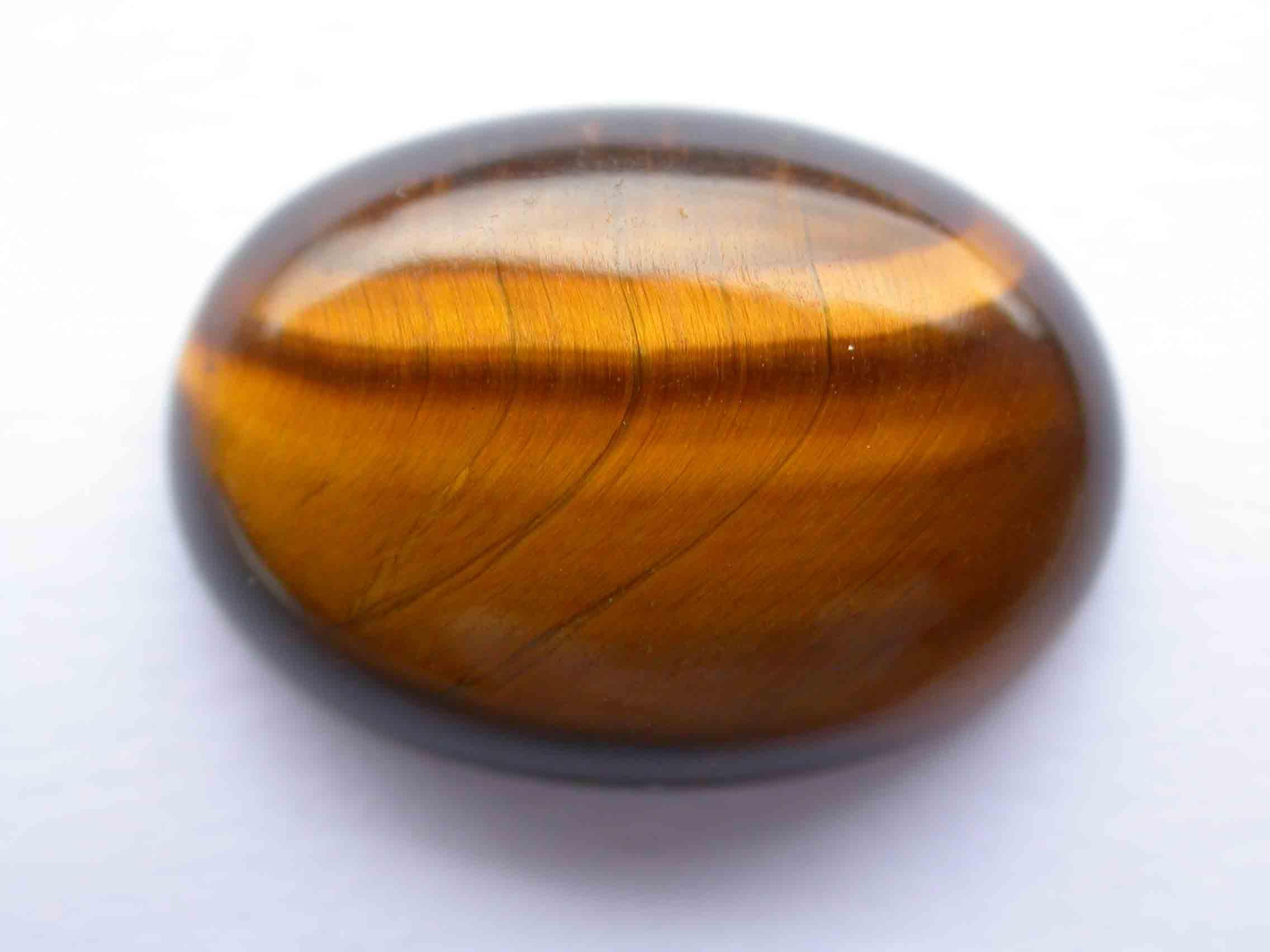 Chatoyant quartz known as ‘tiger’s eye’ is the only chatoyant gem produced in abundance. It can be found in South Africa and Australia and is particularly popular for use in men’s jewellery.

Cat’s eyes commonly occur in yellow, yellow-brown and greenish-yellow. Some stones, such as cat’s eye alexandrite, can even exhibit colour change which is very rare, extremely expensive and desirable. The chatoyancy is caused by very fine needles which give a bright, sharply defined eye. 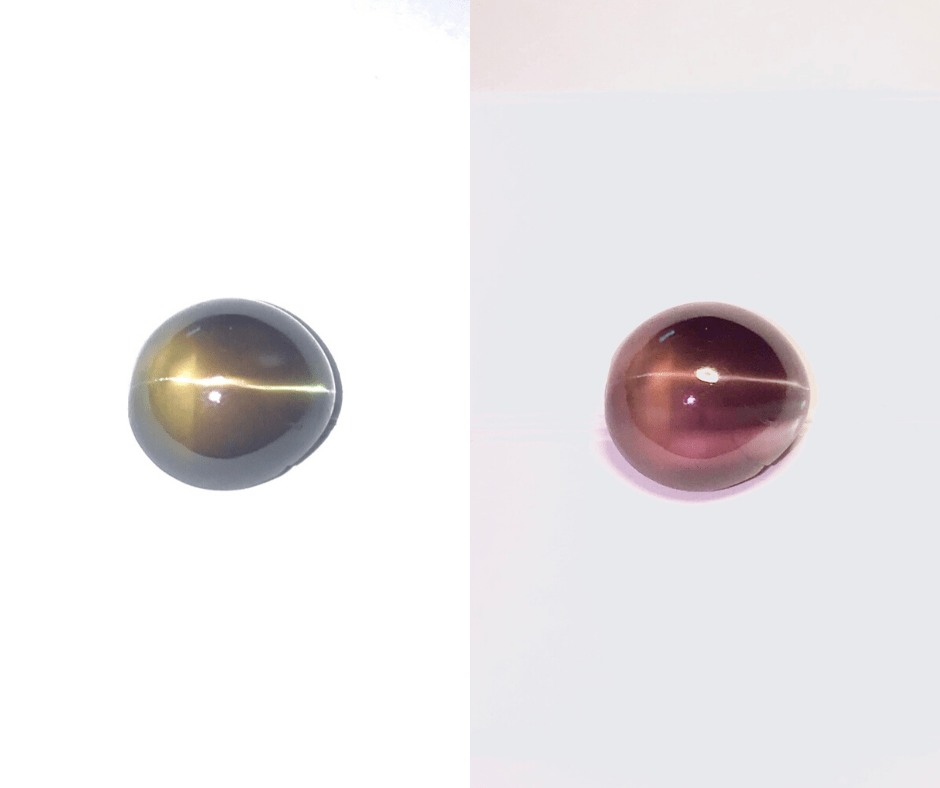 Cat’s eye can also show a mesmerising ‘milk and honey’ effect where one side of the line is milky and the other translucent. As light moves across the surface the bands part and merge like the blinking eye of a cat. This particular effect has led some to believe that the stone possesses supernatural qualities.

At 8.5 on the Moh’s scale of hardness, cat’s eye is a hard and durable stone and is especially popular in Japan for men’s jewellery due to its rarity.

Cat’s eye was also a very popular stone for engagement rings in Victorian times, when it was known as chrysolite. Another old name allocated to this stone is cymophane which means ‘wave’ and ‘appearance’ because of its optical effects.

Chatoyancy is an interesting and unusual effect worth looking out for to add interest to either a jewellery or mineral collection. What’s more, it doesn’t have to be expensive; actinolite, sillimanite and apatite can be found quite easily, and cat’s eye quartz is very popular and obtainable.

Do you have a passion for gemmology but don't know where to start? Why not consider trying one of our upcoming Introduction workshops?

Interested in developing your knowledge on gemmology? Take a look at our Gemmology Foundation course.

Tagged under
More in this category: « Understanding Jade and its Importance in China Hidden Treasures: Highlights of Gem-A's Gemstones and Minerals Collection »
Tweet