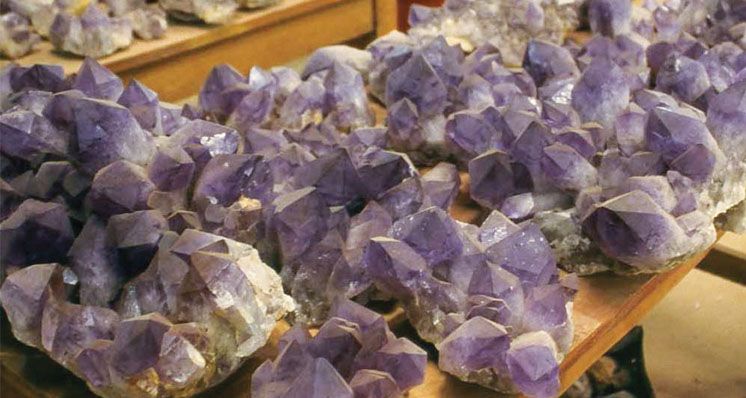 Guy Lalous ACAM EG summarises the discovery of features that could be used to distinguish between natural and synthetic ametrine from The Journal of Gemmology; from the orientation of growth striations to the interference patterns caused by twinning.

What about natural ametrine?

Ametrine is a bicolored quartz variety that contains both amethyst and citrine zones in the same crystal. The only significant source of natural ametrine is eastern Bolivia’s Anahi mine, where it occurs in veins in a dolomitic limestone. The amethyst-citrine bicoloration results from quartz precipitation at very specific geochemical conditions, temperatures, and growth rates. The combination of amethyst and citrine colours in natural ametrine from the Anahí mine has been attributed to colour zoning that differentiates rhombohedral r (violet) and z (yellow) growth sectors.

The colour of iron-bearing quartz depends on the valence state of the iron. The citrine colour in Bolivian ametrine appears to come from the incorporation of very small aggregates of Fe3+. The amethyst colour develops in two steps. First, individual Fe3+ ions replace Si4+ ions in the quartz structure. To develop the amethyst colour, the crystal must be exposed to ionizing radiation to oxidize the iron in the 4+ state.

FTIR is a technique that measures absorptions within the infrared part of the electromagnetic spectrum. In infrared spectroscopy, IR radiation is passed through a sample. Some of the infrared radiation is absorbed by the sample due to vibrations of molecules in the crystal structure and some of it is transmitted. The resulting spectrum represents a molecular fingerprint of the sample. Infrared spectrometry is very useful to detect impregnations in gemstones (polymers, oils and resin), heat treatment in corundum and to distinguish certain natural and synthetic gem materials. Full width at half maximum is the width of the spectrum curve measured between those points on the y-axis, which are half the maximum amplitude.

Beginning in 1994, Russian gem-quality synthetic ametrine entered the market. Synthetic ametrine can be identified by employing advanced techniques, such as EDXRF chemical analysis, and IR spectra. High-resolution (0.5 cm-1) FTIR analysis has shown that a band at 3595 cm-1 is present in the vast majority of natural amethyst. If the 3595 cm-1 band occurs in synthetic amethyst, it has a much larger FWHM (Full width at half maximum) value than in natural specimens. EDXRF chemical analyses revealed higher concentrations of K, Mn, Fe and Zn than in natural ametrine.

The conoscope is a polariscope accessory tool. It is a strongly converging, strain-free glass sphere. When a gemstone is positioned between two crossed polarizers, interference colors that are centered in the specimen will be witnessed with the conoscope when the optic axis is exactly perpendicular to the polarizers.

The optic axis in a uniaxial gemstone can be found with a polariscope that has a conoscope lens and, on occasion, with a refractometer. The direction of the optic axis cannot be obtained by refractometer readings for samples cut with their table at random orientation to the optic axis and some difficulties may arise with samples displaying complex colour zoning or twinning.

In this article, the authors explain the possibilities for separating natural from synthetic ametrine by microscopic examination. The immersion microscope was used to look for twinning features, to establish the orientation of the violet/yellow colour boundaries and the direction of growth striations relative to these boundaries, and to observe any characteristic inclusions.

What are Brewster fringes?

Amethyst from worldwide localities is commonly Brazil-law twinned, which is an intergrowth of right- and left-handed quartz. Such twinning is evidenced only by examination under polarized light. It results in sectors which, when viewed perpendicular to the c-axis, show symmetrical trigonal patterns of dark bands known as Brewster’s fringes. In Bolivian ametrine, these fringes are found only in the alternating amethyst sectors, and not in the citrine sectors.

The microscopic procedure for identifying these key features can be summarized as follows. The examination of a faceted sample of unknown origin should begin by orienting the dominant colour boundary perpendicular to the rotation axis of the sample holder. If the stone is natural, the typical interference pattern with Brewster fringes will be revealed upon rotation of the sample.

Furthermore, growth striations inclined at relatively large angles to the colour boundary will be observed in the violet portion of the stone after a rotation of about 40° versus the c-axis. If the sample is synthetic, rotating the sample generally will not bring the optic axis into view, and violet growth striations parallel or at a small angle to the violet/yellow colour boundary frequently will be present. It is possible to find the optic axis in a synthetic sample by moving it to other orientations within the sample holder, in which case an untwined interference figure normally will be seen.

Separating synthetic ametrine from its natural counterpart using conventional gem lab equipment is possible, provided that the gemmologist has a good understanding of the morphology and optical mineralogy of both natural and synthetic material. The authors insist to use immersion for microscopic observations as the various patterns or structures observed without are of less diagnostic value.

This is a summary of an article that originally appeared in The Journal of Gemmology entitled 'Distinction of Natural and Synthetic Ametrine by Microscopic Examination - A Practical Approach' by Karl Schmetzer 2017/Volume 35/ No. 6 pp. 506-529

Cover image: Crystal clusters that occupy the storage room of the company Minerales y Metales del Oriente in Santa Cruz, Bolivia. Only small portions of the crystals are of facetable quality. Photo taken in 1997; courtesy of Udo Reimann.

Tagged under
More in this category: « Investigating the Opinion of Laboratory Reports and Geographic Origin of Gemstones An Update on Identification Features of Treated Baltic Amber »
Tweet