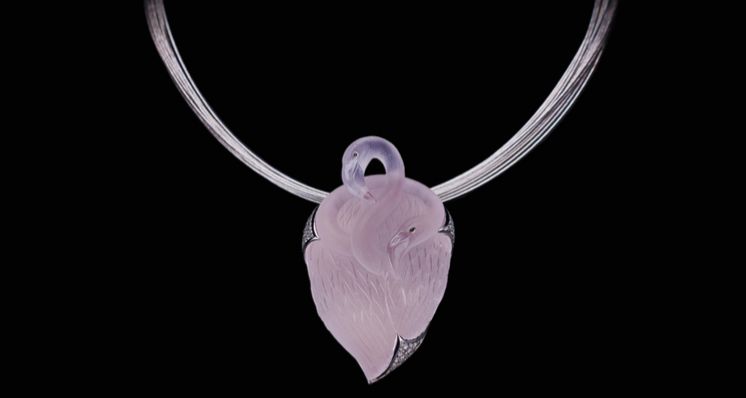 Hosted in the majestic Goldsmiths' Hall, Goldsmiths' Fair is an annual highlight for those working in the gold, silver and jewellery industries. Gem-A Communications Assistant, Olivia Gillespie, reports on some of the key jewellery trends and gem highlights our team enjoyed at this year's Fair.

Goldsmiths’ Fair presents a stellar showcase of the finest silver and gold craftsmanship from a selection of noteworthy designer craftspeople working within the UK and internationally. This year, Gem-A took a visit to both weeks of the Fair to see the many works incorporating gemstones that had made the final cut for 2019.

There certainly were a lot of gemstones to admire in a wide variety of innovative jewellery and ornamental settings. Here, we have selected just a few of our gemstone highlights from Goldsmiths’ Fair, along with some gem trends to keep an eye on.

Fancy-cut gemstones seemed to be a key trend at this year’s Goldsmiths’ fair, with many jewellery designers opting for a more creative and unusual look over more traditional stone cuts. 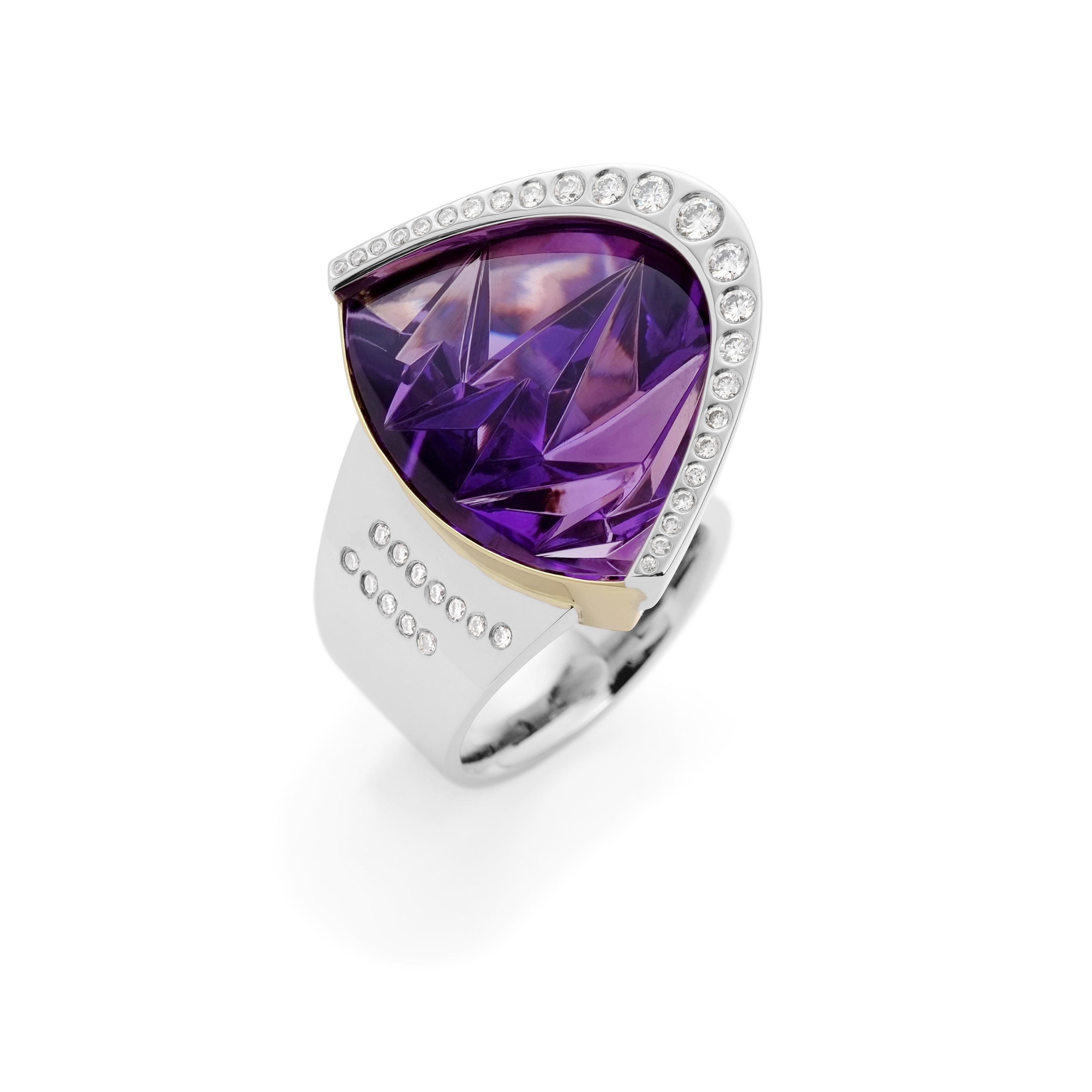 On the first week of the Fair we especially enjoyed admiring the stunning jewellery on David Fowkes’ stand, which featured a variety of innovative fancy-cut gems. Fowkes’ fabulous 28.25ct amethyst ring accompanied by 24 small diamonds in an 18ct yellow gold collet setting was certainly an attention-grabbing piece; the huge amethyst had a criss-cross design cut into the back of the stone which added extra scintillation to the jewel.

During the visit on the second week, Mark Nuell’s remarkable amethyst necklace caught our attention; his 18ct gold necklace, featuring a selection of vibrant freeform hand-cut and polished amethysts, was an enviously attractive jewel.

It was interesting to see a number of jewellery designers use some more unusual gemstones to create striking pieces of jewellery. 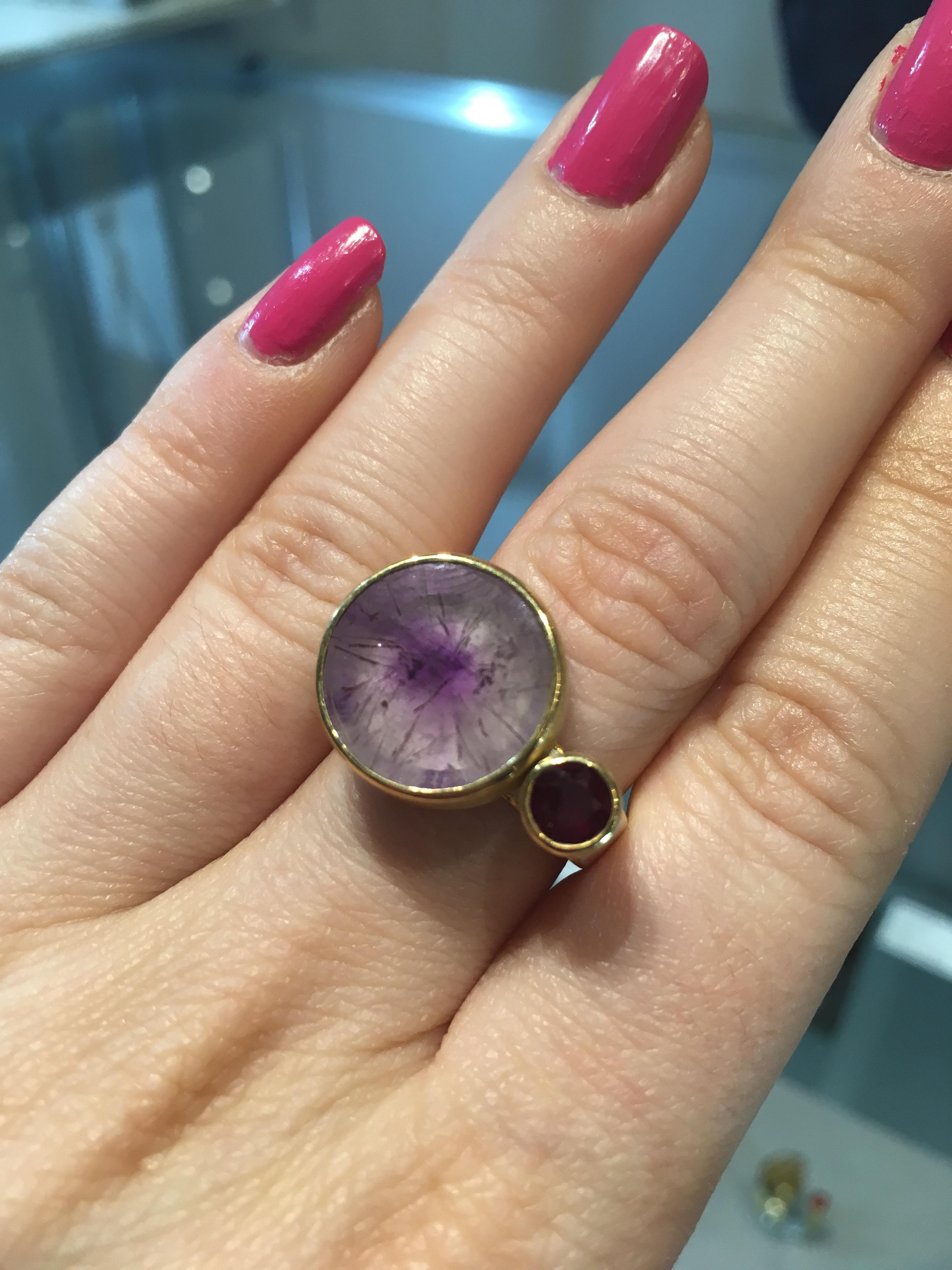 Tanja Ufer showcased a selection of her contemporary statement rings, featuring creative combinations of gems which produced a modernist, celestial-like effect. One particularly eye-catching piece was a 22ct gold ring with fine gold kumboo featuring ruby alongside a disc of amethyst in quartz, which appeared like an intense burst of purple in a colourless stone. 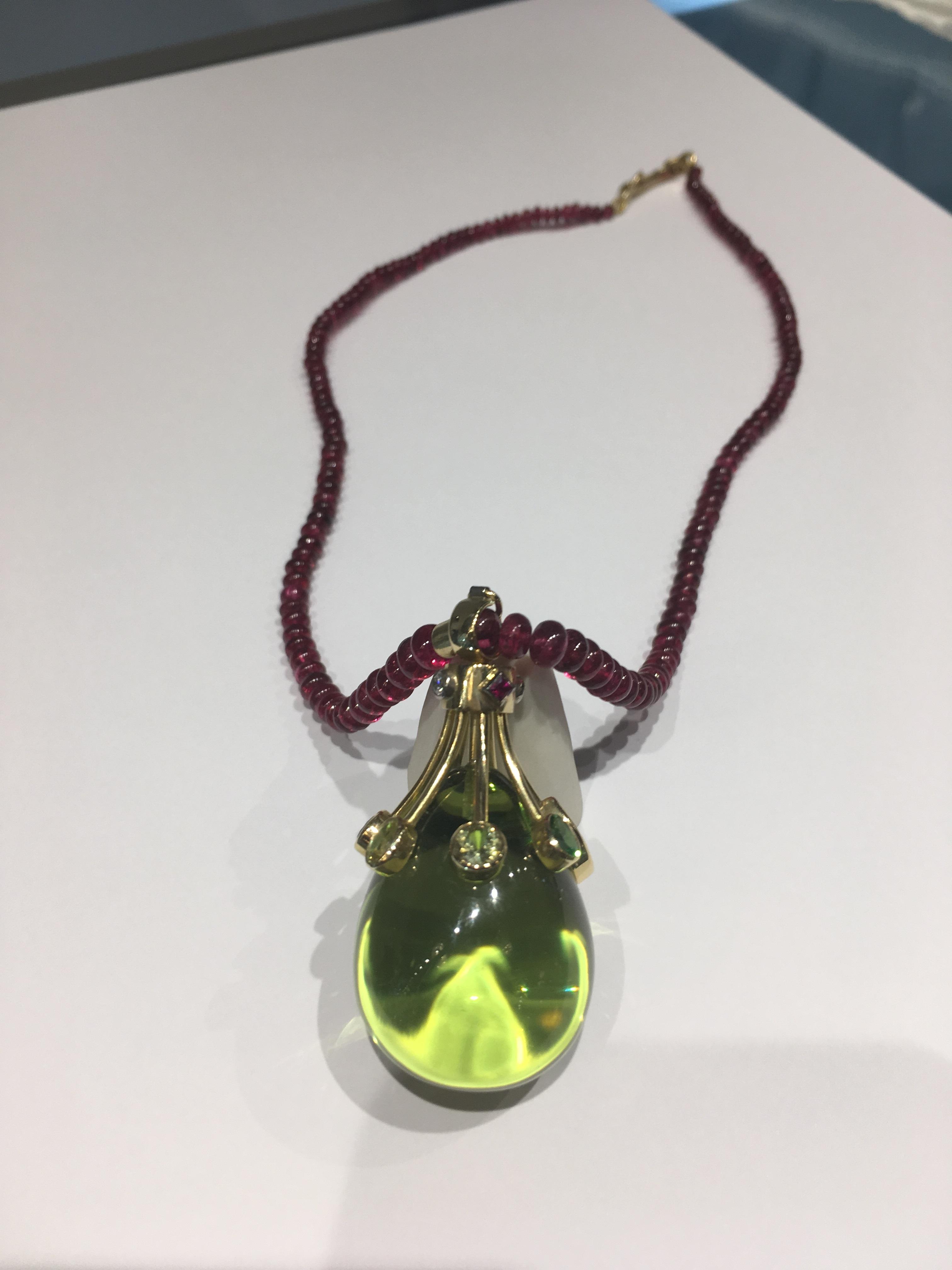 Another memorable piece was James Fairhurst’s amazing multi-gem necklace which featured an enormous green amber cabochon pendant set in gold alongside a variety of dazzling and colourful gems including diamond, red garnet, blue spinel, tsavorites and chrysoberyl, and suspended on a string of red spinel beads.

While there were only a few pieces of pearl jewellery on show at this year’s Fair, there was one particularly impressive pearl necklace that stood out from the crowd during Week One.

The centrepiece on Graeme McColm’s stand was a necklace featuring a string of huge Tahitian pearls in a variety of tones accompanied by a pop of deep red in the form of a mirror-cut rubellite set in 18ct gold. It was especially interesting to see how the designer had taken a traditional, elegant style and given it a contemporary and eye-catching twist.

Without doubt some of the most mesmerising jewels on display during Week One of the Fair were those presented by Ingo Henn of Henn of London. Henn’s stand showcased a beautiful selection of high jewellery featuring huge and masterfully carved gemstones.

One piece which particularly caught our eye was an 18ct white gold necklace with a pendant featuring a 177.65ct morganite stone intricately carved into two flamingos entwined in an embrace (cover image). The image crafted into the morganite by Henn’s Master Carver was quite awe-inspiring to behold and had the effect of creating a stunning, romantic story in this jewel.

Aside from the amazing gemstone jewellery on display, it was great to see several craftspeople employing gemstones in ornamental works at Goldsmiths’ Fair this year.

Two highlights for us were Loucinda Nims’ silver decorative plate, which creatively incorporated dashes of labradorite and moonstone, and Romilly Saumarez Smith’s ammonite display pieces with a luxury twist; one of her mounted fossilised shells was decorated with 18ct yellow gold and featured a tiny sprinkling of pearl and diamond. 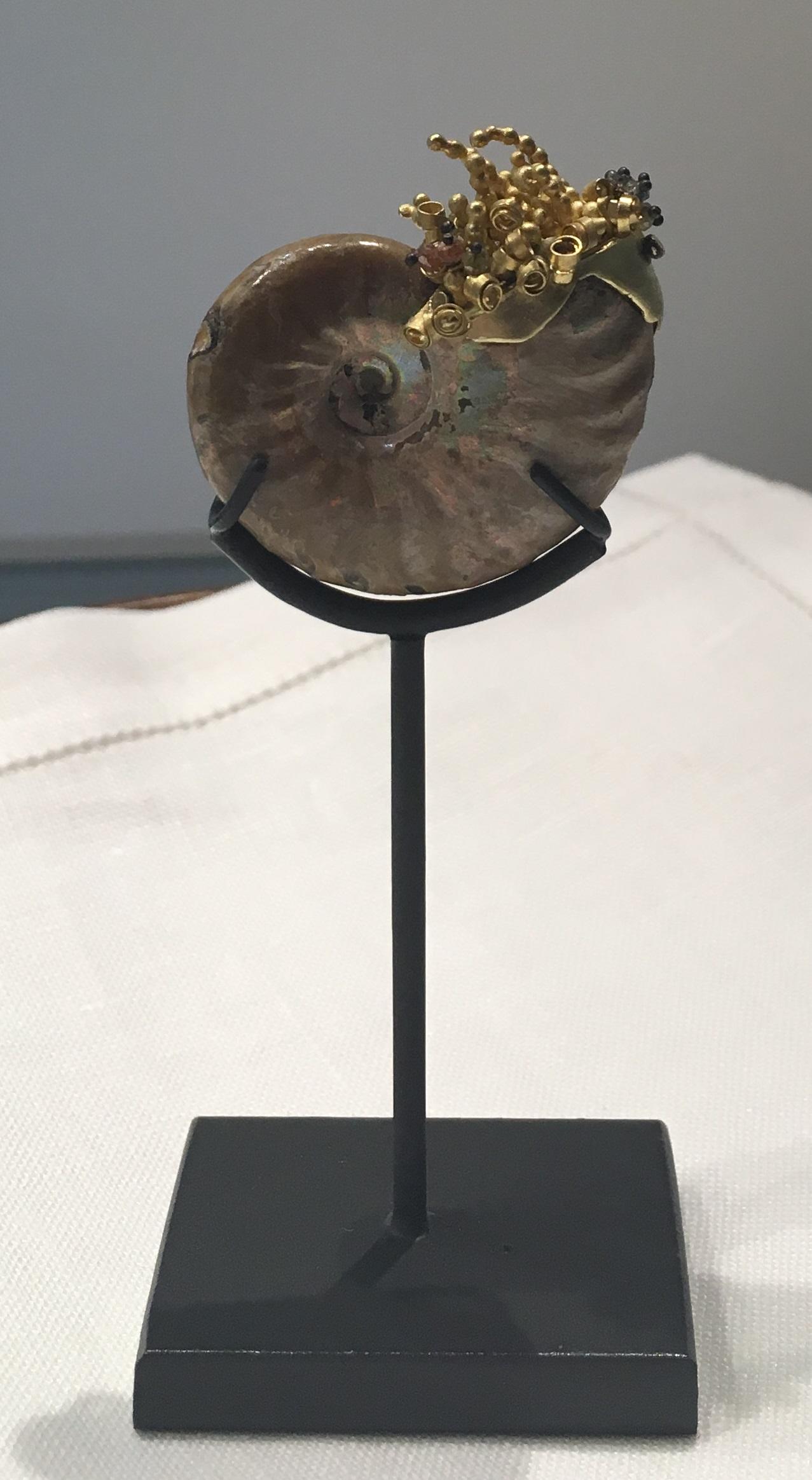 We were hugely impressed to see such a wonderful variety of gemstones used in so many different and original ways by the fabulously talented craftspeople at Goldsmiths’ Fair this year. We certainly left with a lot of jewellery envy and are already excited to see what next year’s Fair brings.

Interested in developing your knowledge on gemstones? Why not consider taking our Gemmology Foundation course?

Tagged under
More in this category: « Highlights of Gem-A Conference 2019 Gem-A at Hong Kong Jewellery and Gem Fair 2019 »
Tweet
Become a Gem-A Member
Apply to become a Gem-A Member
Subscribe to our Newsletter
Keep updated with Gem-A
Sign Up
Get in Touch
Can't find what you're looking for?
Contact Us