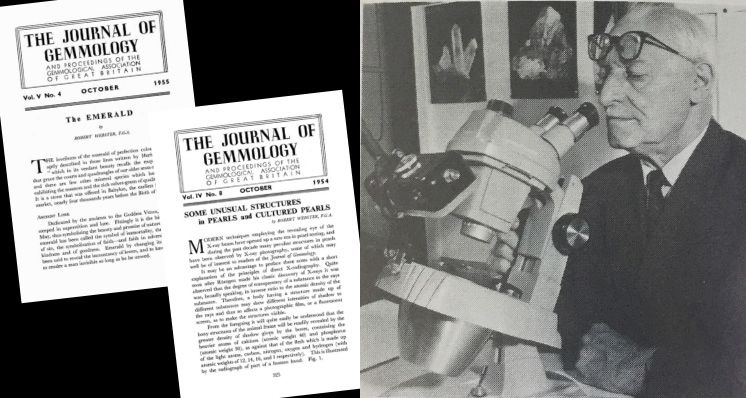 Our Heritage Series celebrates some of the most prominent figures in Gem-A's History who have helped to shape the world of gemmology today. Listed in the French Association of Gemmology's '50 Most Influential Gemmologists of All-Time', this instalment turns to Gem-A's most prolific writer: Robert Webster.

Born in 1899, the young Robert Webster left school at the age of 15 to support his widowed mother, and his father’s footsteps as a pawnbroker. As Basil Anderson notes in his touching obituary to Webster, this proved to be a valuable training ground for the practical gemmologist. 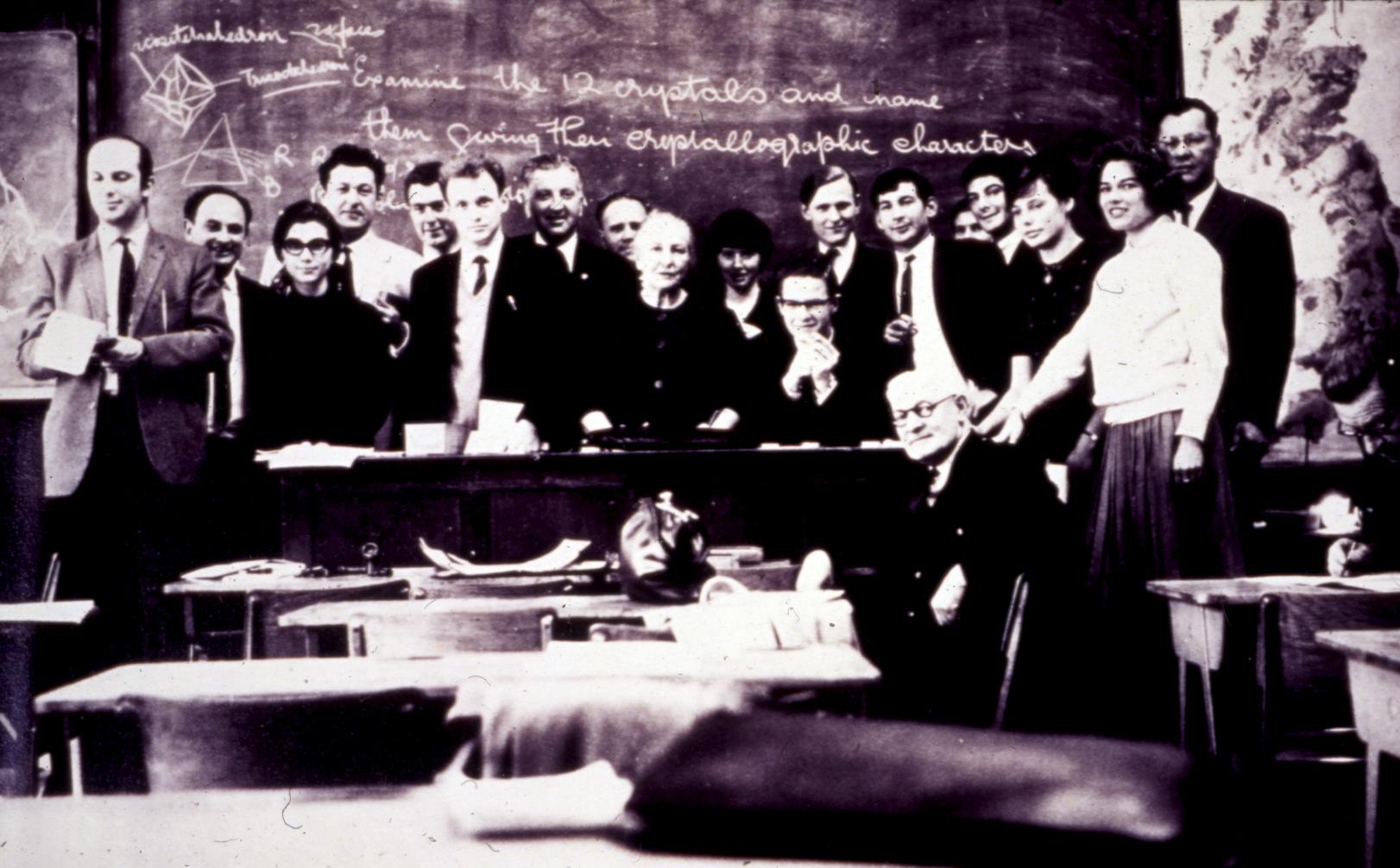 Webster and his Gemmology Class © Gem-A

During the First World War, Webster was awarded the Military Medal for his bravery in carrying messages under fire, and on returning to England he began studying gemmology at Chelsea Polytechnic under Mr I.G Jardine. It was here in 1933 that Webster met the recently appointed lecturer in gemmology, Basil Anderson, at a time when the gemmological world was, in Anderson’s own words, “advancing on all fronts”.

Webster soon became a regular contributor to The Gemmologist (predecessor to The Journal of Gemmology) specialising particularly in ivory, and he secured his Gemmology Diploma a year later in 1934. 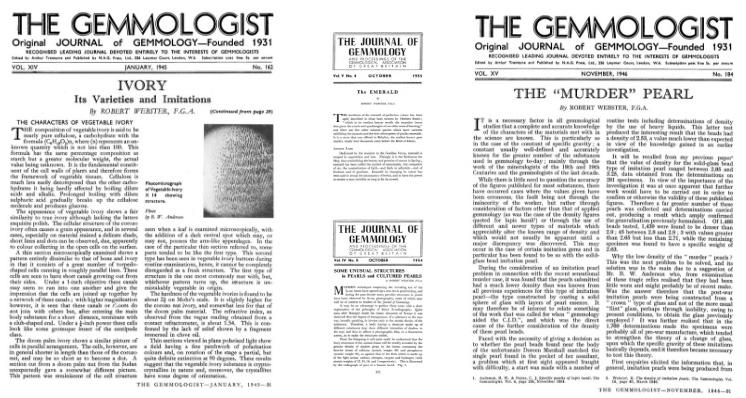 Robert Webster’s gemmological career went from strength to strength: in 1942 he became an assistant lecturer at Chelsea Polytechnic and, following WWII, he was invited by Basil Anderson to join the Testing Laboratory team in Hatton Garden, to tackle the new challenge of calibré synthetic corundum. In the first year alone they tested 105,000 stones!

In the 1940s the Gemmological Association established the Research Diploma, to encourage and recognise excellent postgraduate research by Fellows of the Association. Robert Webster is one of only six people to be awarded this coveted Diploma for his thesis on ivory and its various imitations. It made such an impact that renowned mineralogist Dr Herbert Smith added sixteen pages to his 1949 revision of Gemstones! 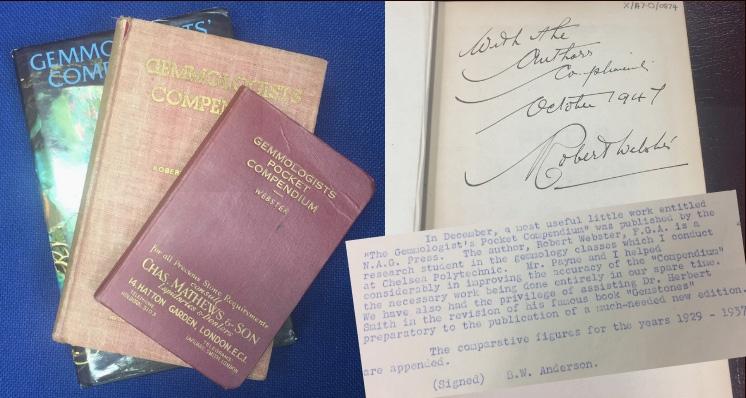 Collection of Editions of Webster's Compendium, with document from Annual Report of the testing lab for the London Chamber of Commerce

In 1937 Webster published his Gemmologists’ Pocket Compendium with “the intention to cover as concisely as possible all the information most useful to the practical gemmologist”. This captured the spirit of Gem-A’s ethos since 1908 of providing quality gemmological education for the benefit of the gems and jewellery industry, and was built on the very data recorded by Basil Anderson and C.J Payne, the compendium has been the ‘bible’ of professional and amateur gemmologists and retail jewellers.

Together with his 1941 Practical Gemmology and epic two-volumed Gems in 1962, Webster’s contribution to gemmological research has made him one of the most recognised voices in Gem-A history. His prolific work is still held in high esteem, to such an extent that when contributors were invited to revise Gems, gemmologists from Australia, Canada, Germany, Thailand, Vietnam, the UK and the USA answered the call. 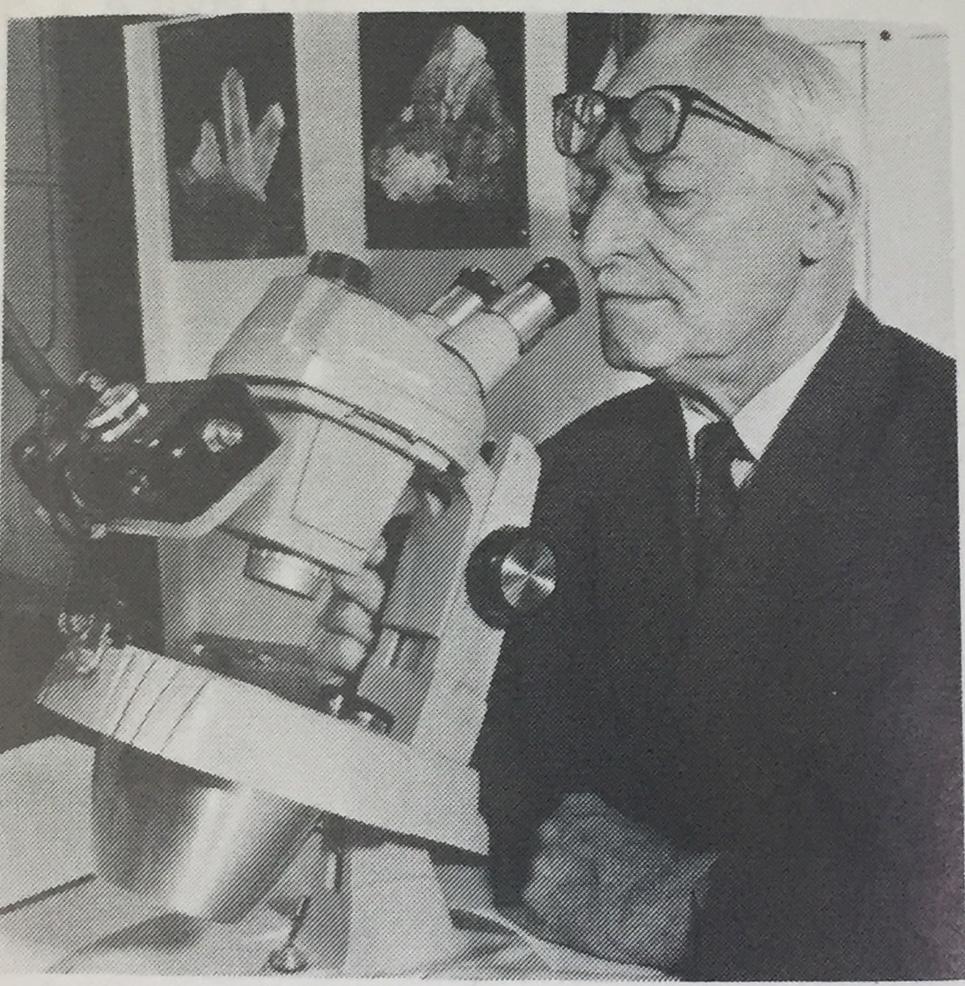 On Webster’s death at the age of 77 in 1976, Anderson’s touching tribute to his friend’s memory serves as a testament to Webster’s impact on the gemmological world:

"So manifold and varied were the activities of Robert Webster in the field of gemmology that the gap left in our ranks by this death can never adequately be filled – not, at least, by any one person."

Robert Webster is remembered at Gem-A as one of our greatest gemmologists. Future gemmologists studying at Gem-A HQ in London are taught in the Webster Room, dedicated to his memory. To this day, Webster’s Gemmologists’ Compendium remains one of the most comprehensive guides for anyone studying gemmology.

Tagged under
More in this category: « Heritage Series: Sir James Walton, The Royal Surgeon Leading the World's First Gemstone Testing Laboratory: Gem-A's Basil Anderson »
Tweet
Become a Gem-A Member
Apply to become a Gem-A Member
Subscribe to our Newsletter
Keep updated with Gem-A
Sign Up
Get in Touch
Can't find what you're looking for?
Contact Us